Our story with Romeo begins in jail.
On February 3rd, 2007, Joshua C. and his wife were on their way to visit her father when the conversation turned to dogs.
“She had gone to the local animal shelter the day before and found a few Corgi mixes, and I convinced her to stop by so we could take a look. When we arrived at the shelter and approached their cage, I said “You mean these guys?”

Romeo and his sister. They would be playing a harmonica if they had thumbs.
“They weren’t there the day before, and it took all of 2.5 seconds for me to be “first in line” to adopt the male.  We found out later these two had been found wandering the streets of Costa Mesa the night before. We would have taken his sister as well, but we live in a three-story condominium and both dogs were severely overweight. Romeo was 48 pounds, and his sister looked like she could have been at least 55. We had no idea if the stairs would end up causing them problems, so we played it safe and adopted one.” 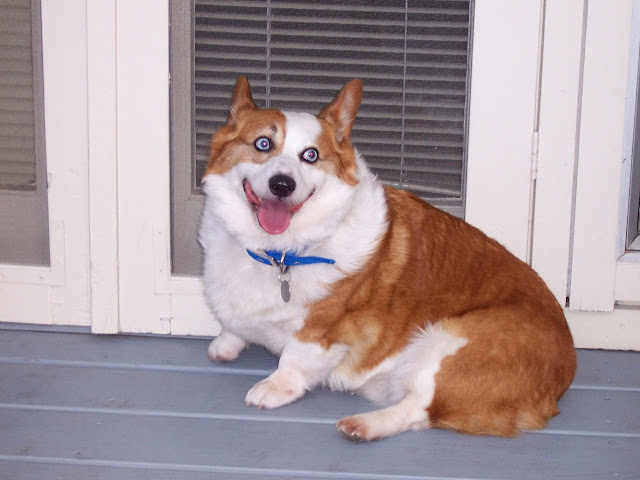 He was rather … chunky.
“Don’t worry. Romeo’s sister was adopted at the same time by a very loving family who had just lost their dog a month before.”

“At first, Romeo was extremely shy and reserved. He seemed unsure about everything he did, and didn’t make a sound. We didn’t even know whether or not he could bark until about a year after we took him home with us.”

“That was the second thing we found out about him. The first was that he loves to PLAY!” 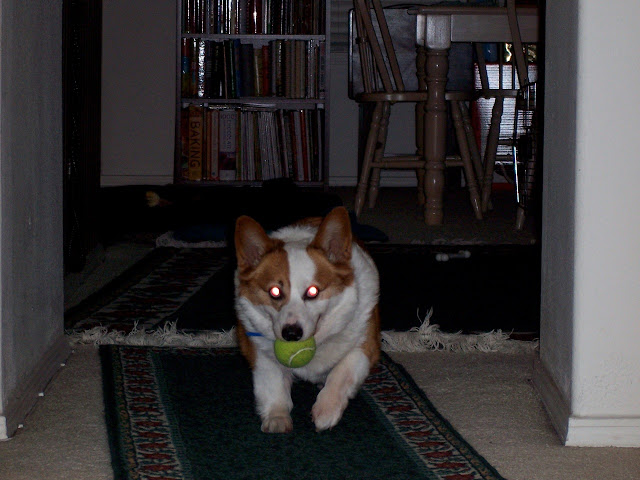 BALL!
“I’d throw a tennis ball down the hall and he’d be after it like a shot, bounding back to drop it in my lap for another round.” 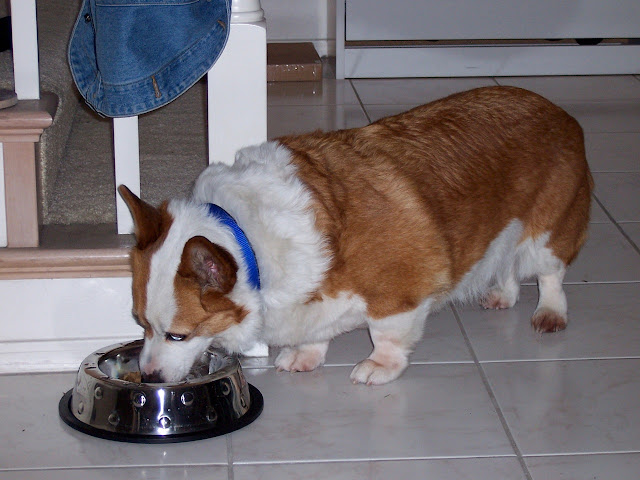 “The little guy had something weird going on with his feet.”
“He had some odd brown markings on them when we first got him. The vet said it was due to a food allergy and recommended a special diet. The marks began fading soon afterward, and were gone months later.” 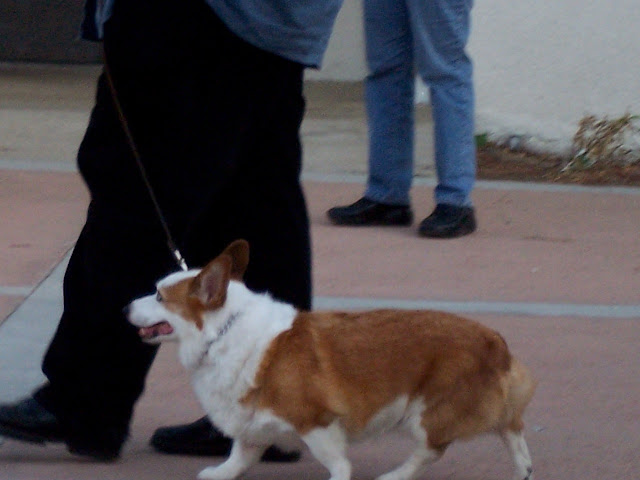 First in his obedience class.
“About six months after we got Romeo, we noticed that he was limping a bit. We took him to the vet, who took some X-rays and found that Romeo had hip dysplasia and a herniated disk between his fourth and fifth vertebra. Remember earlier when I said we didn’t know he could bark? He hadn’t made a peep in all this time, nor did he let on that there was anything wrong other than a slight limp that had developed. The vet told us to have Romeo avoid stairs, so he became the King of Sheba, carried up and down the stairs at least ten times a day, with yearly X-rays to make sure his conditions weren’t worsening.” 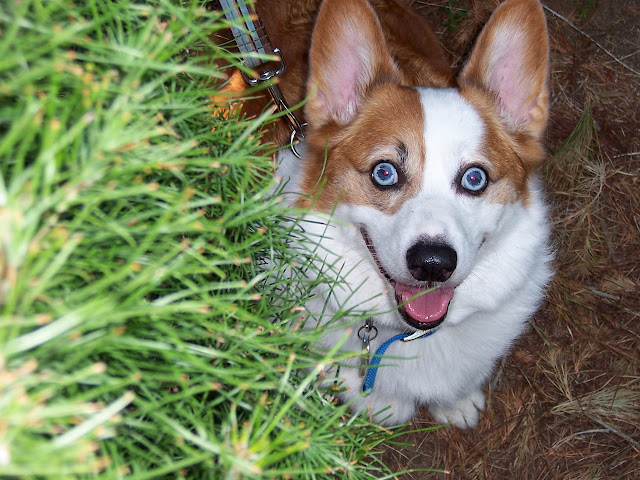 I want THIS tree for Christmas!
“Time passed, and things settled into a steady routine. Two walks in the morning, two walks in the evening, and lots of playing when we got home. Soon, he was back to a somewhat normal weight and exploring the neighborhood.” 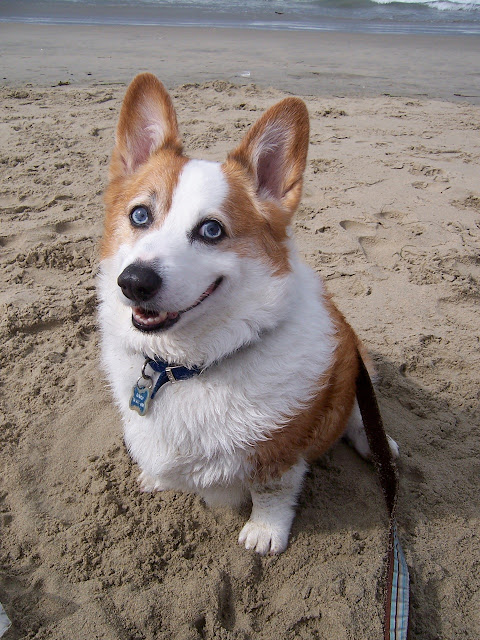 We welcome our new Corgi Overlord!
“About a year and a half after Dr. Woods told us about Romeo’s back, we noticed him limping again when he walked on the grass (he was fine on the sidewalks around our condo). It was odd, because he was just X-rayed five months before and there wasn’t anything wrong.  When we took him back to the vet for more X-rays, we got the bad news. Romeo had cancer, and based on the X-ray (the head of his right rear femur was hollowed out at his knee, like an eggshell), Dr. Woods suspected aggressive osteosarcoma (bone cancer).  There were no signs of it on his X-ray five months earlier.”

“He recommended a specialist at VCA All-Care in Fountain Valley, and after two biopsies Romeo’s cancer was narrowed down to histiocytic sarcoma (a soft tissue cancer that attacked Romeo’s knee joint), rare in most dogs and unheard of in Corgis (the oncologist hadn’t seen a case in all the time he had been working at VCA).” 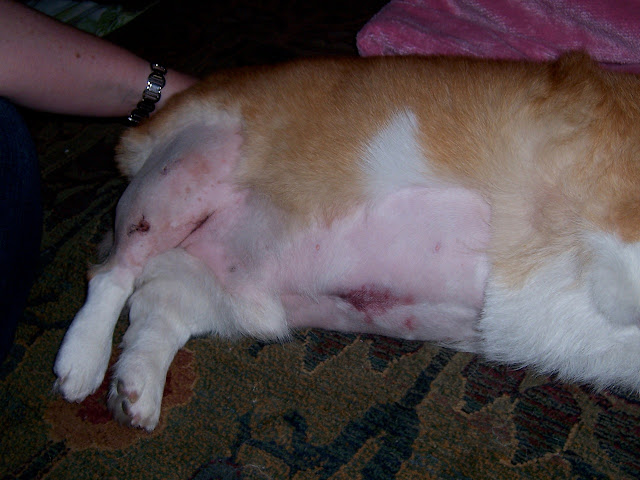 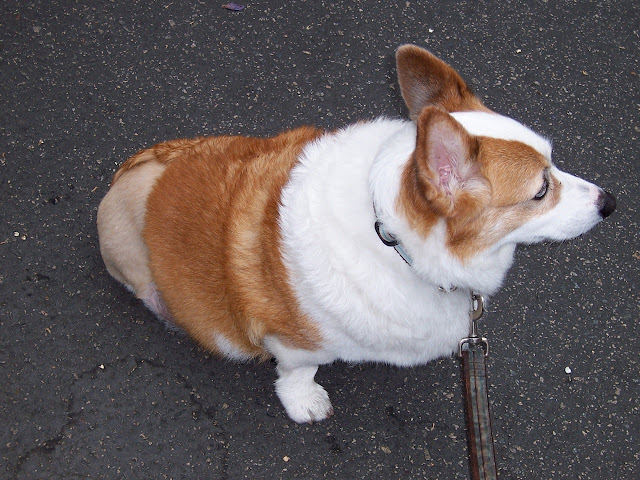 This whole ‘standing on three legs’ thing sure does tire a dog out.

“Romeo bounced right back after surgery, hopping along on three legs the next day and looking much happier than we had seen him in months. The removal of his leg ended his pain.  We found out later that his femur had actually fissured down the middle. Remember, Romeo hadn’t made a peep and only
limped when he was on uneven ground, and he was looking to make up for lost playtime. The only thing that caused him trouble was using the bathroom, but once he got the balance thing down everything was smooth sailing.” 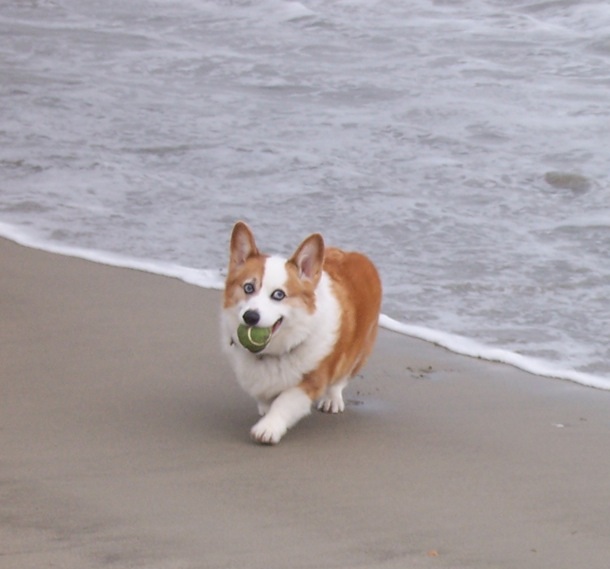 The only thing Romeo likes more than fetch is fetch on the beach!

“The acupuncture was performed by Dr. Woods, and was used to combat any nausea from the chemotherapy, as well as alleviate his back and hip problems. It worked amazingly well. Romeo never suffered any nausea, and his back and hip issues have gotten better, even with the extra pressure from only having one rear leg.

“Me and the leash holder, out for a stroll.” 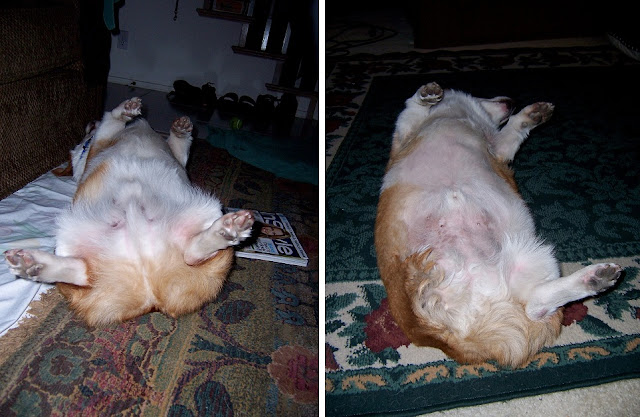 “In May of 2011, the oncologist at VCA pronounced Romeo to be cancer-free. No more X-rays, no more ultrasounds!” 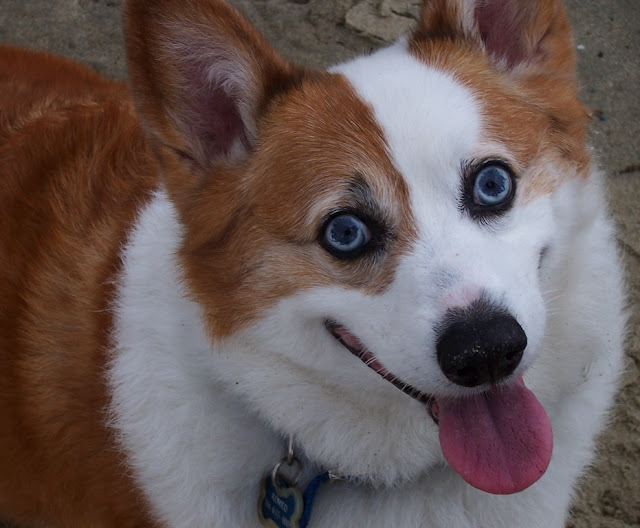 “Just Romeo, a happy, fun-loving dog who wants nothing more than a game of fetch, belly rubs and the occasional piece of Sea Jerky.”
*  *  *  *  *
Romeo, you’ve sure got a special family!  What a lucky fella.  Welcome to The Daily Corgi!

Ten year old Frankie stakes out his favorite spot on the couch. Flooftastic.   Jasper still looks a lot like a puppy, but he ... END_OF_DOCUMENT_TOKEN_TO_BE_REPLACED