“They call me… Rooster. 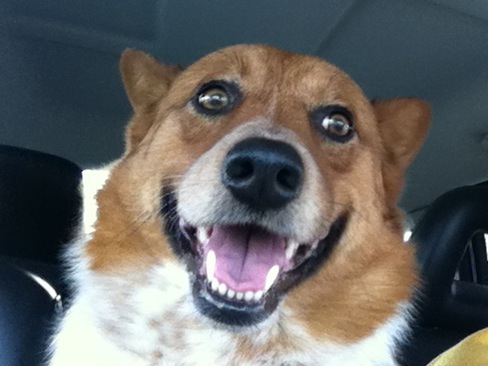 Sometimes it’s Wooster or Brewster depending on whatever flies out of Jeanette’s mouth! I got my name because I’m colored like a Rhode Island Red Rooster and I have this funny tail. Dallas H., a volunteer with Corgi Connection of Kansas is the one who pointed out my “rooster tail.” I hope I get to meet her sometime, she helps a lot.

In late January I wandered on to some people’s property in Nebraska and they couldn’t find my owner, so after a few weeks Corgi Connection offered to take me and find me a new home.That’s why I’m here today. I’m taking applications for a new home. Right now I’m staying with Corgi Connection founder Jeanette DeMars, her husband Marte and their four Corgis: Wally, Alice, Gordon and Ramsey.

I get along with all of them really well and can get each of them to play with me, except Wally who is going to be 12. It took me a while to get Gordon to play, but I finally did it! Me and Ramsey, who is four, play the most. We like to race through the house, wrestle, play tug of war and chase each other. 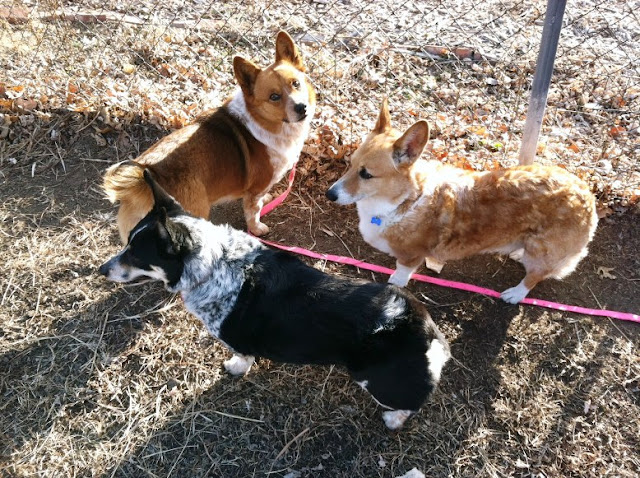 They tell me I’m not all Corgi but a red heeler-Corgi. Alice, is a blue heeler-Corgi so I think that makes us extra special and extra smart. I’m kind of a big boy; about 33 pounds and taller than most corgis. I have red-ticking on my paws and around my fairy saddle. My coat is soft as fleece and I’m getting used to it being brushed. A few days ago I got my nails trimmed and Jeanette said I did real well! 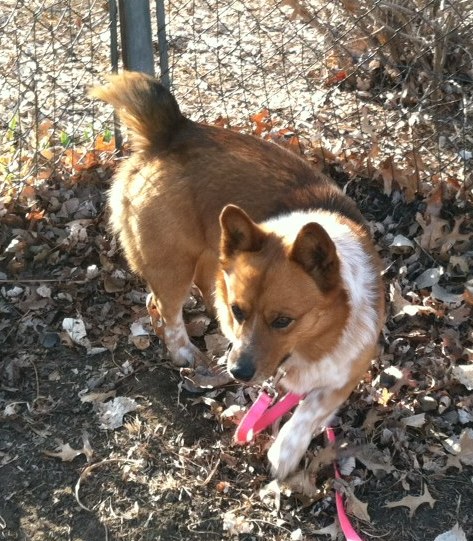 I don’t really know how old I am, but I act pretty young because I like to play so much. They think I might be 18-24 months. When I first came to Corgi Connection of Kansas I had to go right to the doctor. They gave me shots and then I took a nap.  I don’t know what happened but when I woke up I had stitches and something was missing! They told me I didn’t have heartworms (whatever those are) but no other kinds of worms. I haven’t gone fishin’ so I don’t know why I would have worms. I also have a tag that has a microchip number on it in case I get lost.
A few days after I got to Jeanette’s house I had a real bad day with reverse sneezing. Jeanette thought I was allergic to her office because she had taken me to work that day! But then it turned in to a bad cough, so back to the doctor I went. This time I didn’t go to sleep so they wouldn’t take anything. I didn’t like having my temperature taken or having my throat looked at, but after getting some special treats for several days I’m not coughing any more and only occasionally doing that reverse sneezing thing. 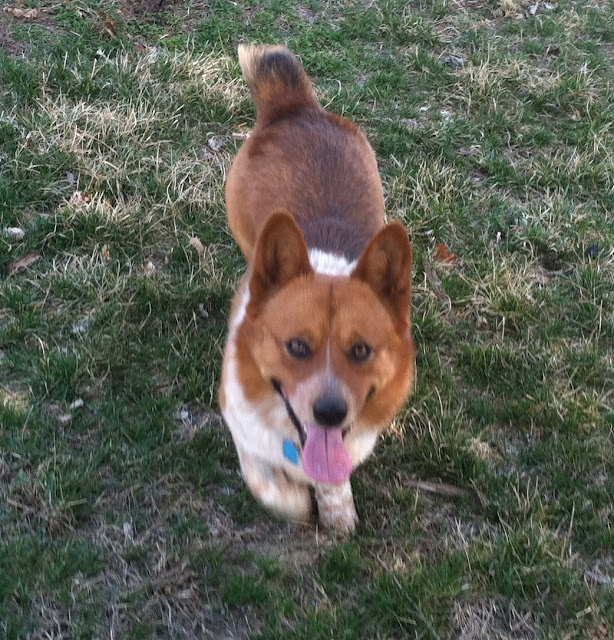 Jeanette says I’m about 100% house trained but will take some time to adjust to any new surroundings. I’ve heard her tell people I take correction very well. I really like people and just love to be cuddled and petted. I’m just about the cutest ever when I lay with my “piggy legs” spread out behind me. It’s about my favorite way to lay. 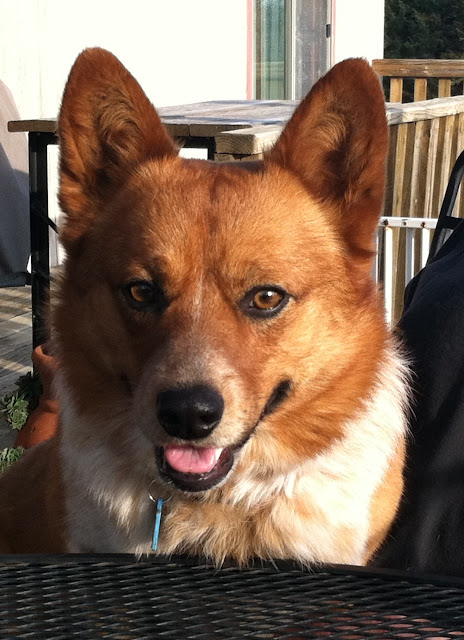 I love to go for walks but can get a little over zealous when I see another dog. After all, I can’t let the other Corgis think I’m a wuss. I’m trying to do better though. I do well in the yard off leash and don’t wander off. I may chase an occasional rabbit but I come back with the other dogs.
We went to a dog park last week and I ran and ran and ran. After a while several big dogs arrived, including a Bull Mastiff-Great Dane mix. Guess I got a bit too aggressive when they wouldn’t listen to me and one of them ran right over me! We didn’t fight, but I WAS kind of miffed. I slept the rest of the day. 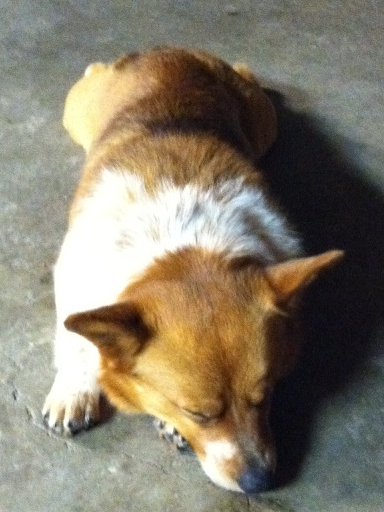 I really like my home right now, but Jeanette says it’s just a stop-over before going on to a better home! Wow, a better place than I have now — that’s going to be awesome!  My wish list for a new home would be one that has another dog that LOVES to play and roughhouse. One that will take me places and for walks and one where I don’t have to be crated much. I’ll do it, but I don’t like it very much. Oh, and one more thing, I’m OK with a cat, but I think if it were a very playful or active cat I might be a bit too much for it. 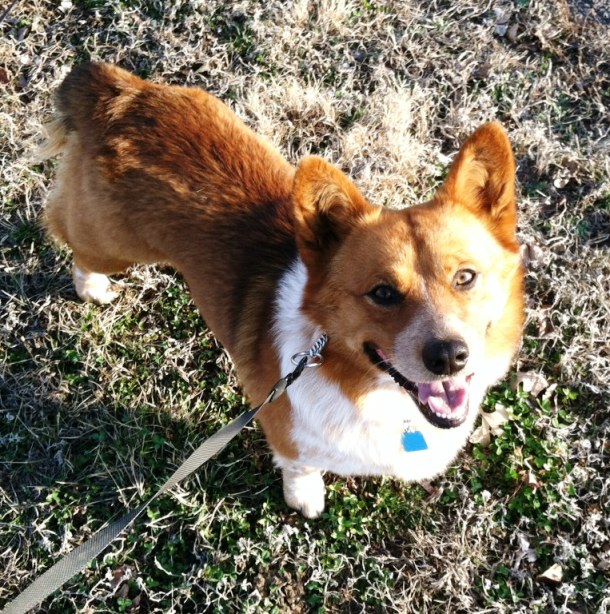 If you’d like to contact the Corgi Connection about taking me home forever, e-mail jeanette@corgiconnection.com.”
*  *  *  *  *
Good news update on Buster Brown, a Wednesday Adoptable from back in January! 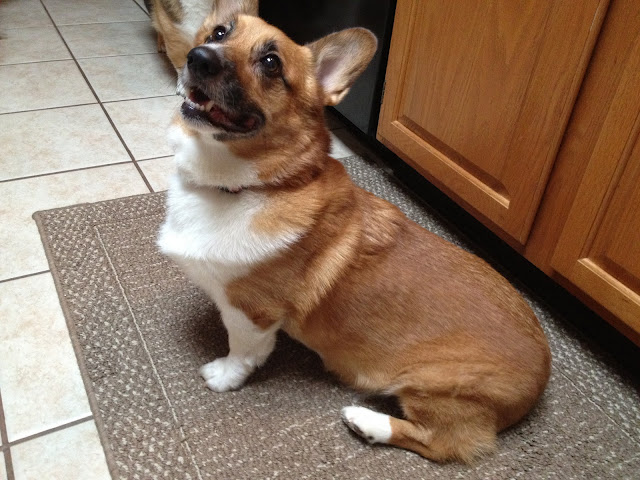 Kay of North Texas Corgi Rescue says Buster Brown has found his own woman to admire in Uptown Dallas. He is completely smitten with her and enjoys the high life in a posh apartment with dog walking services for tenants.
Way to go, Buster Brown and Kay!
*  *  *  *  * 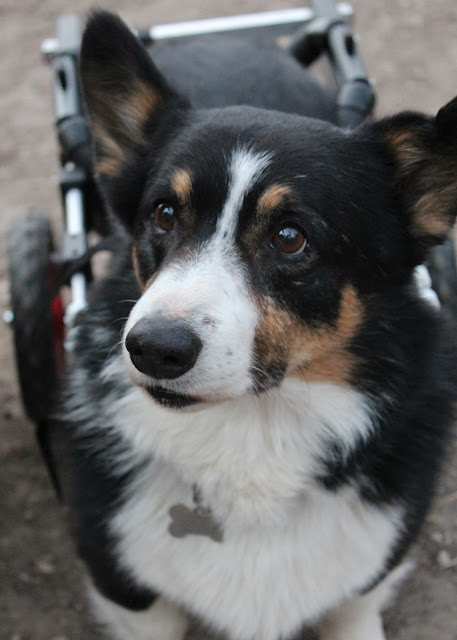 Kansas Corgi Oscar is another rescue who made his Wednesday Adoptables debut on The Daily Corgi back in January.
This absolutely gorgeous boy is still waiting for his permanent placement. In the meanwhile, the good people of Corgi Connection are working to get his health issues addressed.
Oscar does have confirmed DM (Degenerative Myelopathy) and some arthritis.  He’s on medicine for arthritis and will be receiving therapy to minimize the DM symptoms. The doctors at Oklahoma State University have found a small tumor in his spinal cord, but at this time the growth is small enough that compression isn’t a concern and the doctors don’t think surgery is necessary.  It may grow, it might be cancer … but it might not. 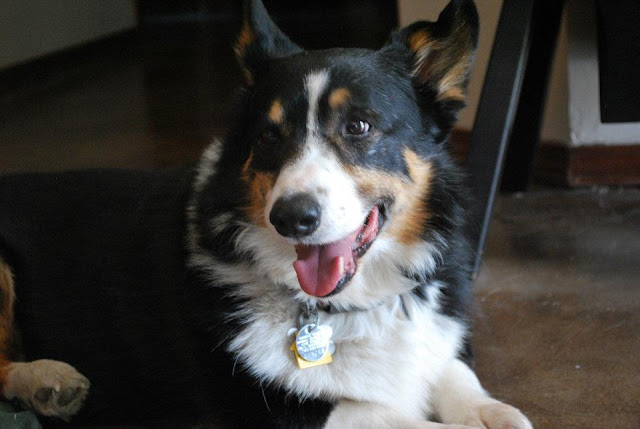 What IS certain is that Oscar is going to make the right forever family very happy when they connect.  Corgi Connection volunteer Gretchen A. says Oscar “would just be a joy of life to anyone’s home.  If someone could dig down deep and find it in their hearts to give this special needs boy a chance in their home, they would see he’s so worth it.  The joy on his face when he gets going, it would bring happy tears to your face.  He’s just a great Oscar.”
“I can hardly wait to parade him around at the Farmers Market in early April. He will be a total rock star!” 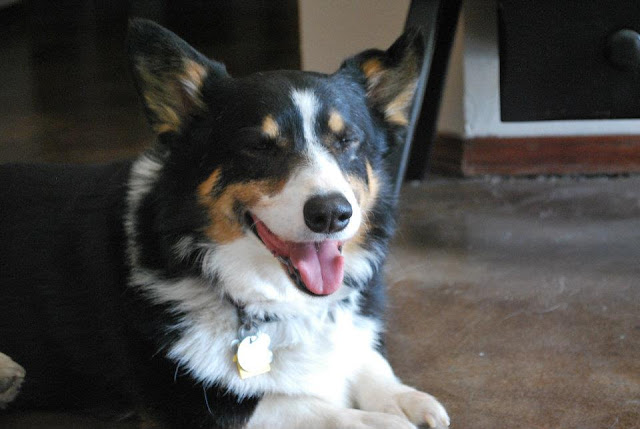 Is Oscar calling your name?  Can’t live without him?  Drop Gretchen a line today!  She’s at ganders.mail@gmail.com.

Ten year old Frankie stakes out his favorite spot on the couch. Flooftastic.   Jasper still looks a lot like a puppy, but he ... END_OF_DOCUMENT_TOKEN_TO_BE_REPLACED