So here I am, The Barney Dog. A little bit about me … Eleven years ago I was born an orphan, of poor but humble parents, in a little log cabin that I built with my own paws. 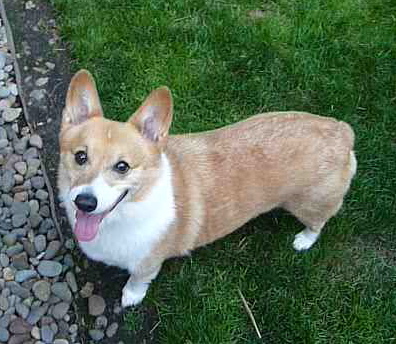 Hah — I jest! Truth be told, I actually DO have very humble beginnings, all trappings to the contrary. My parents found me at a pet store in Scottsdale, Arizona. They later discovered I came from one of the largest and worst puppy mill middleman companies in the country. From Missouri, they ship thousands of puppies each year from mills and kennels. My parents knew they aren’t supposed to buy from pet stores but they couldn’t resist my cuteness. 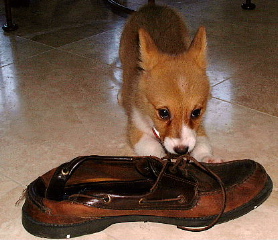 I was born on May 25, 2001. I’m sure I was taken from my canine mom too early because that’s what puppy mills tend to do. I was smaller than my Dad’s shoe when my parents brought me home at seven pounds, and I had a runny right eye.  A few months later, the veterinarian said I had to have surgery to make a minor repair to it.  The pet store gave a health guarantee, but when my Mom asked about possibly picking up some of the cost for the surgery, they said, “Just put the dog to sleep and we’ll get you another one.” Can you imagine? Who would put a 4-month old puppy to sleep just because they needed MINOR surgery? Needless to say I had the surgery and my eye is fine. 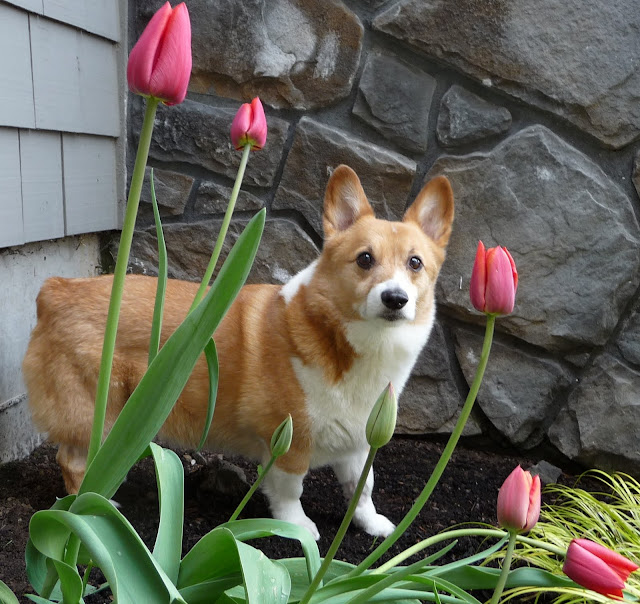 I do, however, have canine lymphoma. I was diagnosed on March 13, 2011 and while I was in remission for 15 months, they found an abnormal mode so I’m currently going through my second round of chemotherapy.  The truly sad thing is that this lymphoma is genetic. It could be environmental, but the lawn chemical that’s been linked to canine lymphoma has been banned. Many (most?) of the Corgis from this breeder will develop lymphoma.
Seems to me they could easily eliminate this problem if they just stopped breeding these particular Corgis, but that’s not about to happen. You see, the alleged breeder is also listed as the vice president of their big corporation.  Sad but true. 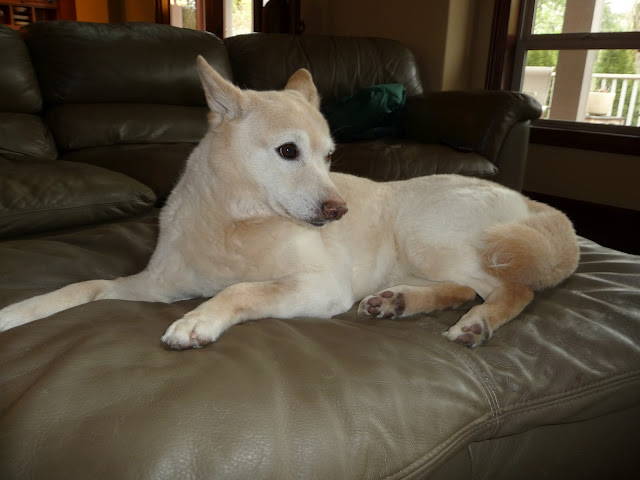 I have an older sister named Tomodachi, or Tomo for short. Tomo is a rescue dog from Arizona. She was left in an apartment when her former owners moved out, where she barked for three days. When the apartment manager finally showed up, they found Tomo and some dead plants. She was still a puppy and wasn’t even tall enough to drink out of the toilet. Some people are just mean!  (Ed. note: and stupid too).

They named her Tomodachi because it means “friend” in Japanese and Tomo surely needed a friend after the way she was treated. Less than a year after I found my new home, my parents found another Corgi.  His name is Fred. He’s a tri-color with large round front paws and small oval back paws, like most Corgis. He came from a reputable breeder in Arizona and he has no apparent health issues. A bit odd but no health issues. 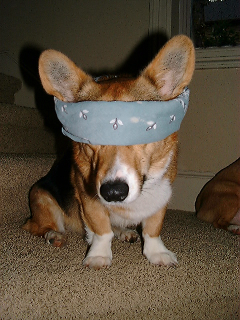 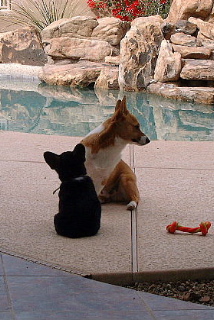 When Fred was a young lad, I tried to warn him about the pool. He never listened. 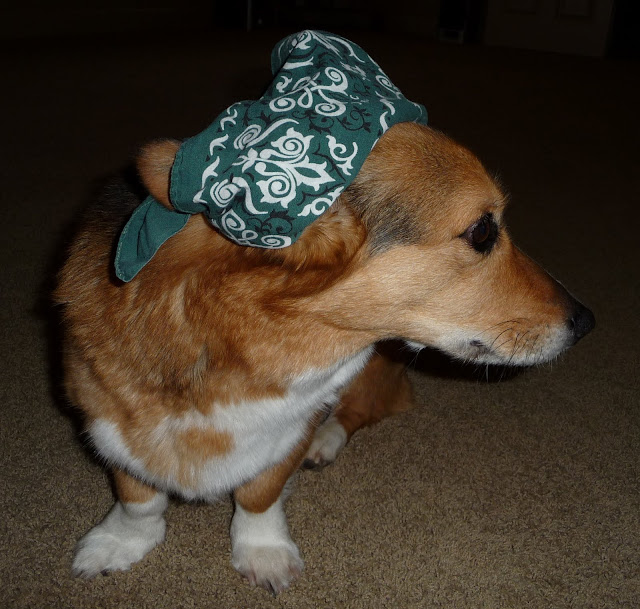 When I started my chemo, Fred tried to make me feel better by demonstrating the proper way to wear a bandana, should my hair start to fall out.  I TOLD him it doesn’t happen to dogs but sometimes Fred just doesn’t listen.  Or maybe he just likes to be a clown.  I know he’s my brother and humans have this “sibling rivalry” thing sometimes, but Fred’s just such a goofball.  We all humor him. 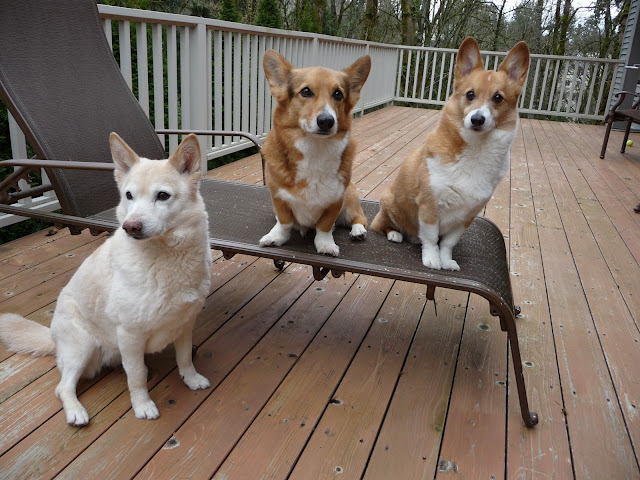 Me, Fred and Tomodachi
Yuki is my other sister, also a rescue. She was found in a front yard in Yakima, Washington, on a chain that weighed more than she did. She’s supposedly part Corgi but I don’t see it. You tell me. 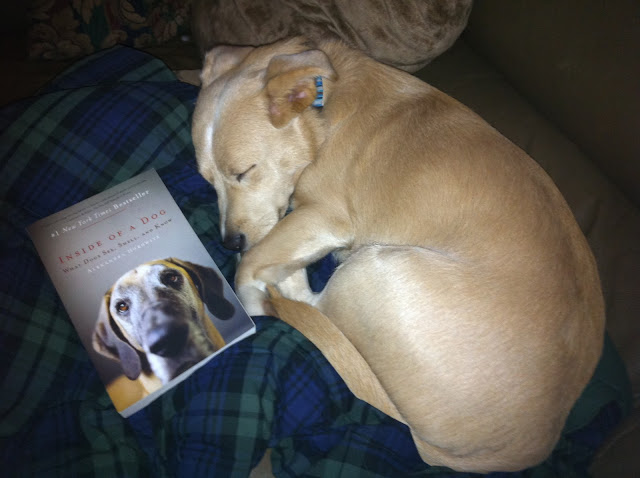 Yuki is a handful and we tolerate her. She just doesn’t understand that 10, 11, and 12-year old dogs might not necessarily feel like going full bore all day, every day. Yuki, who’s still trying to be a puppy, believes one day she will convince Douglas Macaw-thur to play with her. With my elderly wisdom, I try to teach Yuki manners, but she just doesn’t retreat and the word “surrender” is simply not in her vocabulary. 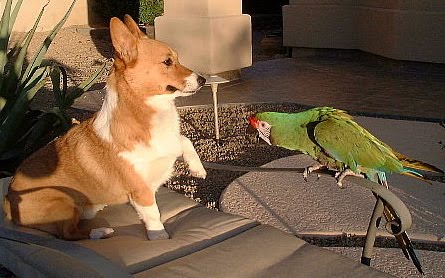 Douglas Macaw-thur is our feathered sibling. Although we get along swimmingly, my other siblings are rather wary of her, since she could take a sizable chunk out of their snouts without even trying. 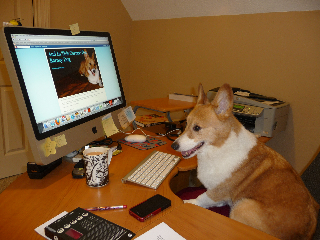 We’ll be moving from Portland, Oregon to Sanford, Florida at the end of August. I’d love to touch base with fellow Corgis and/or fellow cancer survivors to chat, share a treat or two, or just make sure that all the lesser breeds are kept in line at dog parks. You know how they can be. Find me on-line at my blog or e-mail me at the.barney.dog@gmail.com.

The blog is just a way for those of us surviving with (as opposed to dying from) lymphoma to share stories, treatments, recipes for good food when we get a tad nauseous, and sometimes to just lend a sympathetic ear. As you know, we have substantial ears. 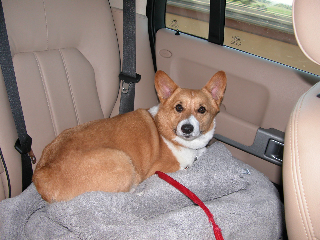 I believe I’ve found a veterinary oncologist in Florida who is familiar with my chemo protocol. She’s located an hour away from our house but I LOVE a car ride! 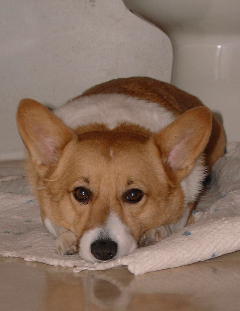 Soooo that’s my life story so far in a nutshell. I feel fabulous and we’re all hopeful that this round of chemo will once again work its magic. It sometimes takes its toll — I feel tired and am not always my usual upbeat self — but how would you feel if someone dry-shaved YOUR legs and shot nasty chemicals into you? The green bandages are attractive, though. 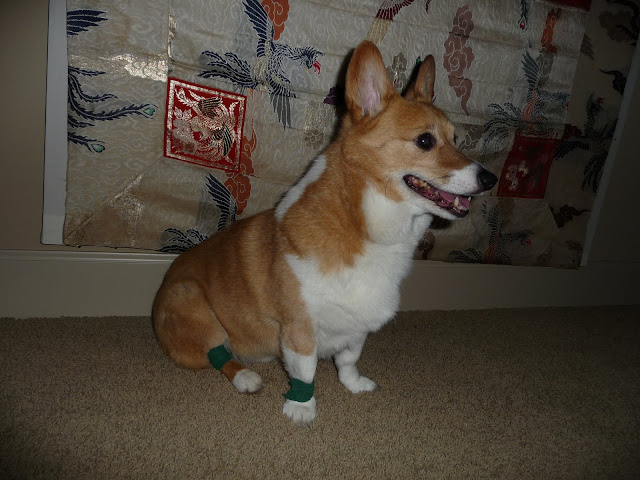 Thanks for reading. I hope that someone else going through what I’m going through sees this and is glad to know they’re not alone.

Ten year old Frankie stakes out his favorite spot on the couch. Flooftastic.   Jasper still looks a lot like a puppy, but he ... END_OF_DOCUMENT_TOKEN_TO_BE_REPLACED