Good
afternoon everyone, and welcome to my fourth weekly guest spot on The
Daily Corgi! I am your host Paige Davis, founder of CorgiPals. As you know, every week I’ll be doing a guest post to keep you up to snuff with the goings-on in the CorgiPals world. This week’s theme: Corgi Math!

First, an update on The Barney Boots Memorial Fund. As of right now, we have raised $2,046 in Barney’s name! As promised, we will be splitting this between CorgiPals and CorgiAid monthly. Each organization currently receives $1,023!

Now let’s talk more numbers! Our second auction for CorgiPals came to a close on Saturday, September 29 and I’m very excited to announce that we were able to raise $4,723.50!!! This amount will be split evenly between the 9 Corgis who were clients when the auction was running: Albus, Cricket, Ginny, Kate, Maggie, Ozzie, Richard, Roxie, and Willow. If everyone pays for the items they won, each of these nine Corgis will receive $524!!

Pretty little Zhoie is nine years old, but that doesn’t slow her down! She still likes to frap and play with the best of them. One day back in August, though, she frapped a little too hard with one of her housemates and ended up with herniated discs in her back. She had surgery last month, and is doing much better now, but her vet bill is too much for her loving parents to keep up with.

Iggy is a senior rescue girl who was in bad shape when her new parents adopted her. Aside from bacterial infections, fleas, cataracts, and glaucoma, she also had a bullet in her hip. CorgiPals is working to pay bill from her treatments as well as the cost of transporting Iggy from Tennessee to her forever home in Florida.

Princess is a repeat client for CorgiPals. In mid-September we raised $300 to help pay for surgery to repair her broken leg. Recently, the cast wrapping caused irritation and an infection on her thigh and belly. This small $232 bill is for treatment of that infection, and we’ve raised $170 so far. Only $62 more will help Princess reach her goal!

Since the theme of this week’s post is Corgi Math, I guess we need the “equals” part of our equation, huh? The burning question is this: just how much does each Corgi get and where do we stand as a whole? Here’s a breakdown! 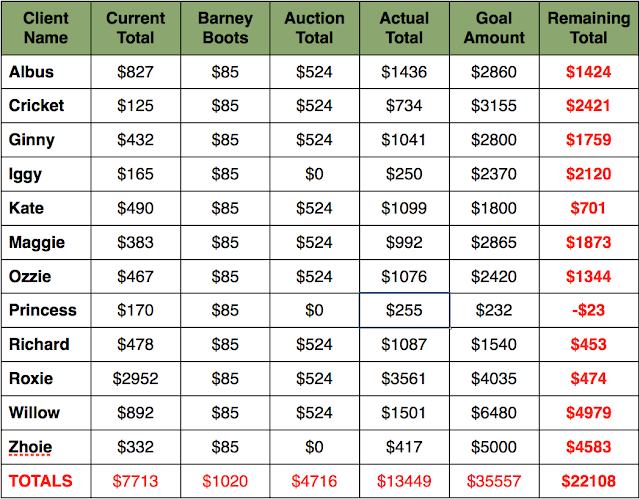 We’ve still got a ways to go, but I know we can do it! Please spread the word and donate if you can. Even $1 will help!

Until next week … Corgi On!!

Ten year old Frankie stakes out his favorite spot on the couch. Flooftastic.   Jasper still looks a lot like a puppy, but he ... END_OF_DOCUMENT_TOKEN_TO_BE_REPLACED