In celebration of National Multiple Pet Ownership Day, I thought it would be fun to round up some stories about how adding another dog (or cat) can improve the life of a formerly solo pet.  Thanks to everybody who shared their tales of the tail (or no tail, as the case may be).

Tip of the nose to the folks at Pets Add Life (PAL) and the American Pet Products Association (APPA) for shining the spotlight on the joys of multiple pets! Not sure about adding another pet to your household? Check out PAL’s page on multiple pet ownership. Oh, and check out their hilarious video compilation of finalists in their “Pets Need A Pal to Talk To” contest. The cat judges are priceless! 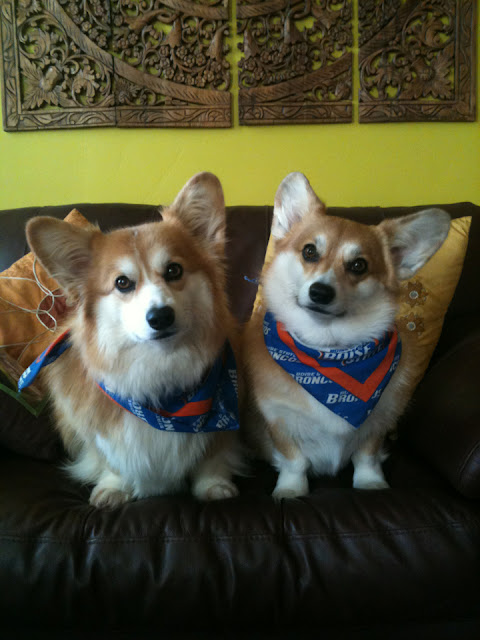 “My
husband and I got Zoe as a puppy a couple weeks after we were married. A
year later, my husband passed away at home. Zoe had stayed by his side
until I arrived home to find him. Zoe and I both grieved deeply and
tried to make it through each day. Within two months of his passing I had
gone back to work and moved. Not only was Zoe still grieving but
she was was having a hard time being alone in a new house. Zoe’s breeder offered Teya, Zoe’s sister, to spend some time with
us at the new house and that was it! Teya never left, became part of the
family and helped us all heal. Zoe and Teya definitely act like sisters
but they are quite the pair and love each other. I am thankful every
day that Teya has joined our pack and made our lives better.”

“I started out
with one Corgi and then I added a Jack Russell. Wow! Did I have a
crazy bunch of fur people, but they are best buds, never have arguments
and love playing with each other. They keep each other company when I’m
gone. It’s the best thing I’ve ever done.”

“Thought
my hubby was crazy when he wanted to get second Cardigan Welsh Corgi but Gilda
really helped Stoney be more outgoing. They are just like siblings —
playing, fighting, loving. It was a great idea to get a companion for
Stoney!” 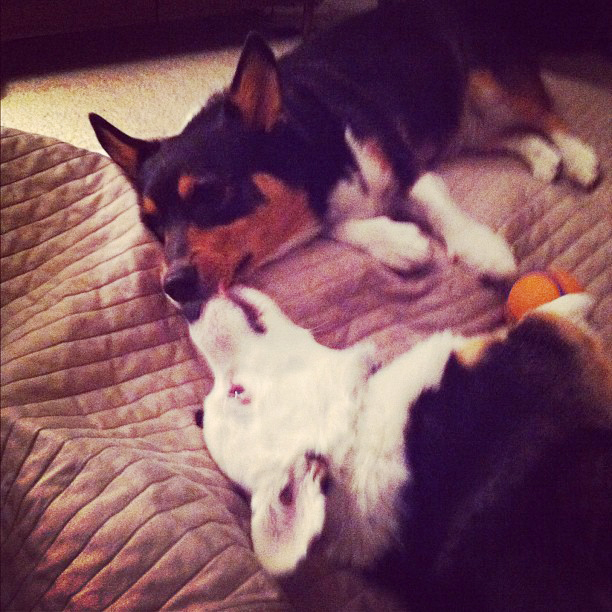 “When we
got Elmer for Pixel, she was angry, confused and wouldn’t even come near us for the first week. No cuddling, no fetch. If he came up
to us, she’d walk away. Now they are besties and make out all the
time!”

“I
have always had two dogs, one older than the other. No human can train
a puppy like an older dog can. My dogs have always got along and
seem to appreciate each other’s company. Now what my Corgi really wants
is a cat, but the Basenji says no.”
— Peggy M.

“Soon after two of our Corgis passed on, Fergus came to live with us and was quite content as an only dog. Then One Day (all good stories have those words in
them) a Jack Russell Terrier named Levee started coming to work with his Mom at our farm. Fergus and Levee started playing like the little wild men that
they are … 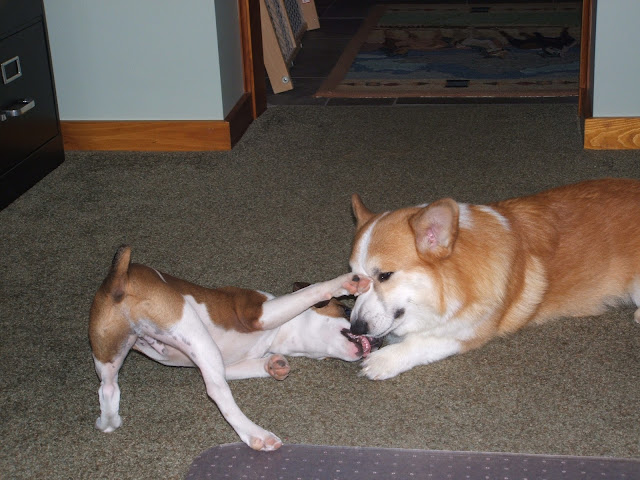 … Of course, Levee ran right into the house and jumped on the
window sills and did all kinds of crazy things that Corgis would never
do! Fergus was quite amazed. They ran together and wrestled, legs
waggling in the air, butts flying around … and then came the awful day
that his mom headed out west for a short time and Levee went to stay
with his grand-parents. Fergus became quite depressed. He did not return
to the content little Corgi he was prior to the arrival of his new friend Levee. So although we were content being a one dog household with
visiting dogs coming in, we decided Fergus really wanted another
full-time friend … 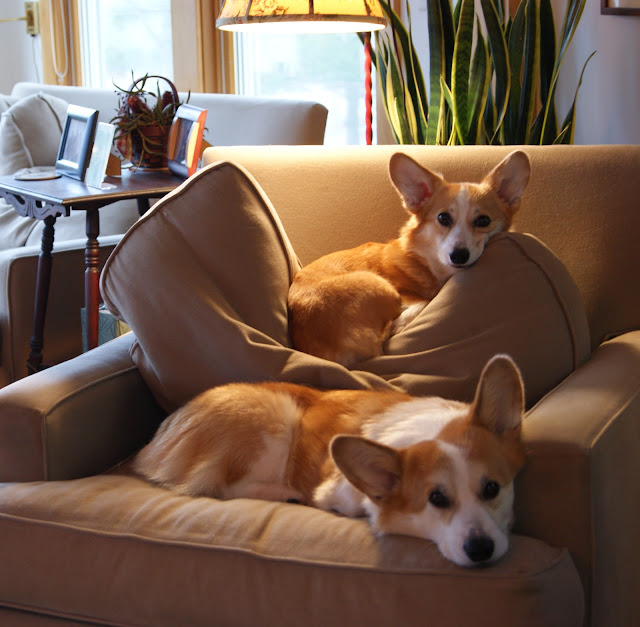 … So along came Lilly. Both of these darlings were past puppyhood (but not full grown) and had been living with other Corgis. Fergus was doing some showing. They were used to other dogs. Lilly came home and settled right in with Fergus no problem. I would definitely recommend a second pooch. Corgis seem to really like a companion. Use good sense when introducing a new dog. Read the books, etc. Be sure the dog coming in is free of disease and parasites and have a great time.”

“Our eleven year-old Fancy has been raised with Oscar the cat (also 11). They take care of each
other. Fancy herds Oscar if he gets outside by accident. Love them so
much!”

“Got a Corgi to keep our Rottweiler company during the day. They adore each other and constantly play and snuggle and hang out.When
my wife moved with the Corgi a couple months before the Rottweiler and I
joined her, both dogs became constantly restless and hyper
(albeit quite a bit more playful and affectionate). I didn’t realize
what a difference it made to them until we had to separate them for a
bit.We also have two rabbits that both dogs adore and get along with swimmingly.”


“Indy
used to spend his days bored, chewing up furniture. Then he got a
little sister in his niece Chiana Adog (aka “The Cheese”) to watch out for.” — Michael D.

“When we adopted Astro, we were told
about Starla, who was being fostered and would be ready for adoption
soon. She had healed from her injury and had just been fixed. We
never thought two dogs would be an option, but once we met Starla we
knew she had to be part of our family. Astro and Starla have been
inseparable since. They are the meaning of true love and have taught
my husband and I what it means to be soul mates. We can’t imagine
our lives without them.”
— Joleen V. 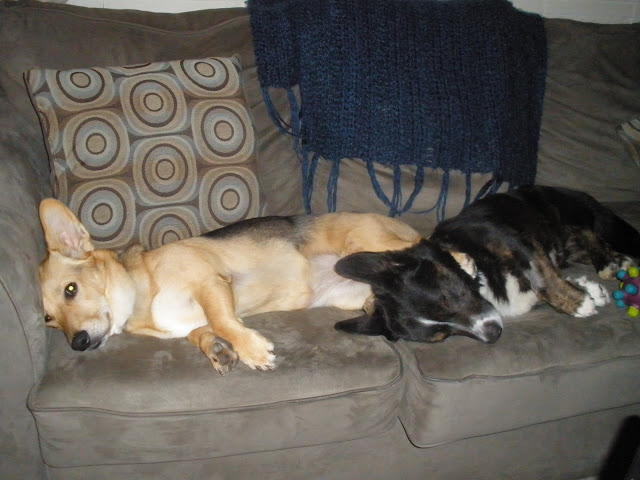 “Mom got Winston to keep me company! It took him a bit to
settle into the lap of Corgi luxury but now he’s my partner in crime!”

“Charlie
and Judie are best of friends. They go everywhere together, sleep in
the same bed and eat from the same bowl. The only problem is they are
twice as noisy and twice as naughty.”

“I
brought In my Corgi to save her from the pound or shelter and to keep
my Rottweiler/Aussie mix company. That was four and-a-half months ago and
we are so
joyful and blessed with her. My big guy, a 119 pound shelter dog, has
arthritis and epilepsy, but our Corgi has had a major
effect on him. He does some romping with her, he’s happier, and they
snuggle together. When one goes outside, so does the other, so he is
more active. (She’s always active!) We have always wanted a Corgi and
are so very lucky. She is our entertainment — how can one be anything
but
happy around a Corgi? Her smile is contagious, and she is dearly
loved. We are proud members of Corgi Nation!” 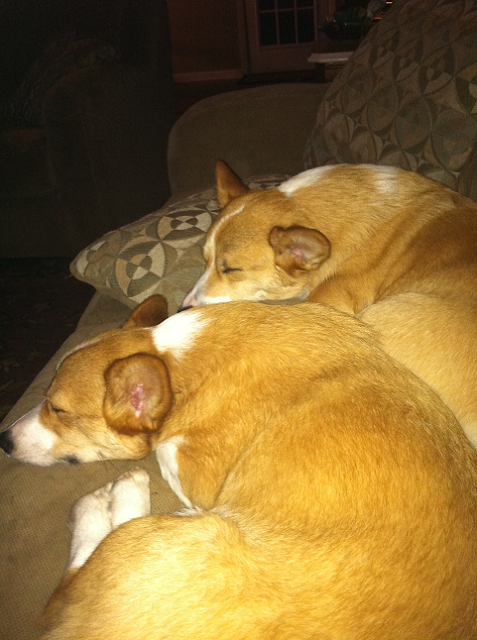 had single Corgis twice in my life. Both times I thought they could
have used a companion, but always felt like it would hurt their
feelings
if another dog came into their lives after being my one and only for so
long. This time around I got sister Corgis and I’m so glad I did. Sammie and Tallie have been friends
since birth and never alone. Never knew I could love two so much at the
same time. Two different, lovable personalities! They love each other too.” 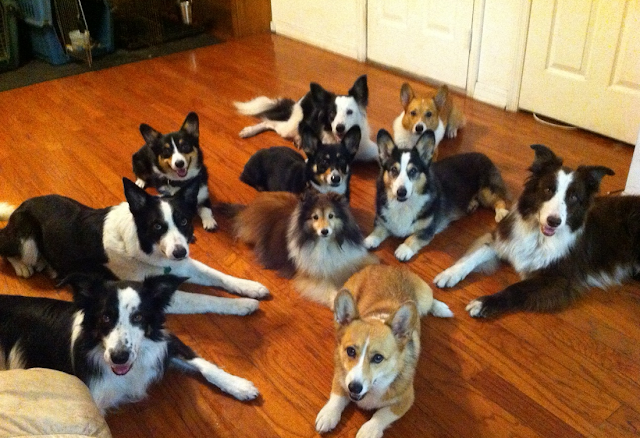 Note: Sponsors PAL and APPA are compensating me for this post. I am happy to spread the word and share the love!

Ten year old Frankie stakes out his favorite spot on the couch. Flooftastic.   Jasper still looks a lot like a puppy, but he ... END_OF_DOCUMENT_TOKEN_TO_BE_REPLACED