One of my absolute favorite things about doing The Daily Corgi is connecting with some genuinely fantastic people. There are so many big hearts, dreamers and do-ers in this group I’ve been blessed enough to connect with. People like the inspiring Geri Sterling of San Diego. 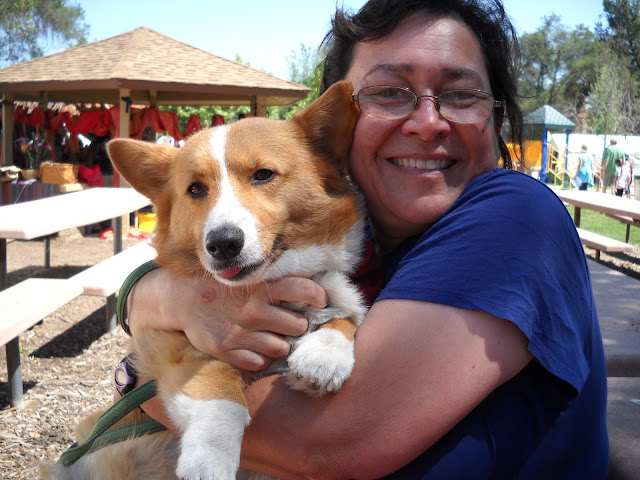 Geri and Sidney
I tease Geri all the time that her red and white Pembroke Sidney is “mine”. Even though I’ve never met him. Sidney has his own space in my heart, and he can occupy it any time he likes. Sid my darling, are you listening? 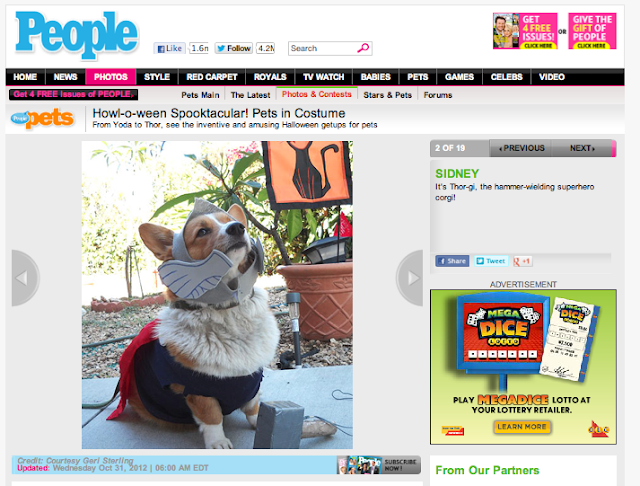 “Our” Sidney won second place in People Magazine’s 2012 Howl-O-Ween Spooktacular Pets for his Thor-gi get-up”. That and his irresistible mug, of course.
Since his Daily Corgi debut in 2010, he and Geri have made annual blog visits with updates on their ongoing fundraising efforts for animals in need. This weekend, they are walking again with other members of the San Diego Corgi Meetup with Team Low Rider at Paws in the Park for the Escondido Humane Society, to benefit programs for rescue, rehabilitation, and adoption. Check out Geri’s fundraiser page here. 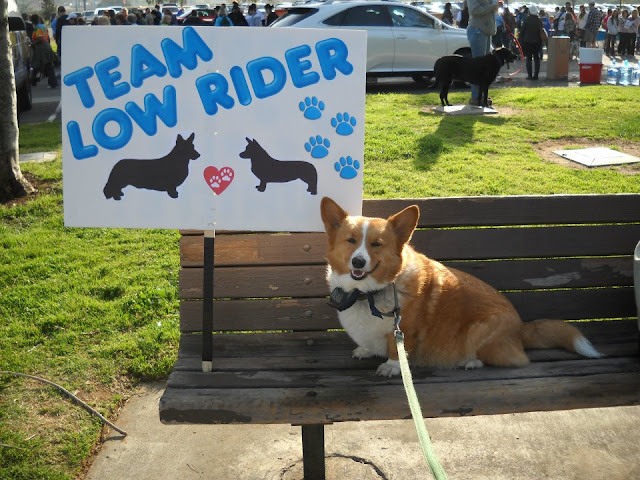 For five years, Team Low Rider has been vying for first place with the competing cat ladies, a group armed with seemingly supernatural powers of fundraising. Those feline-o-philes don’t just win by a whisker; this year they are edging out Team Low Rider by thousands. Well done, cat fans, but never underestimate the big dogs on the short legs. You’ve been warned. 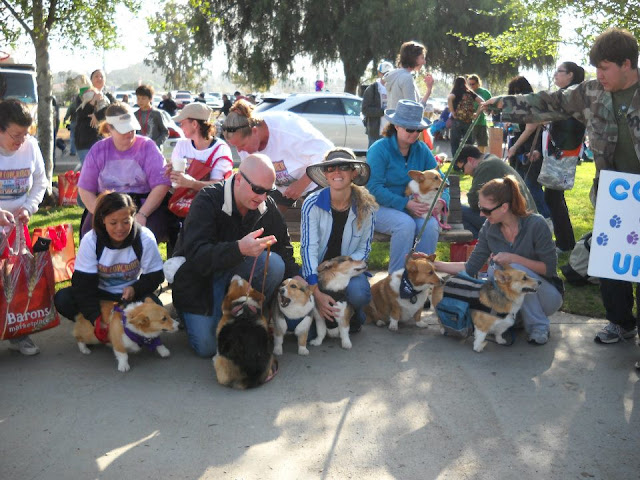 I don’t know who these people are, but I already like them. A lot.
“In a nutshell, what inspires me with the fundraising is the chance to
honor my mother. Mom and I never really saw eye to eye on most things. We drove each other crazy, but we always agreed on our
love for animals. I grew up with an abundance of pets and Mom never
said no to another dog or kitty. We always rescued. When I was a
teenager, I volunteered as a dog walker. A few
years ago, before she got a regular job, my daughter Rebeca volunteered
there as a cat cuddler.”
(Wait, there’s such a volunteer position? I must have it!)

“Three years ago, Mom passed away from
cancer. Because I miss her
and being able to “talk dog” with her, I decided to step up my efforts
and really try to make a difference as a way of remembering her.
Previously, I had walked in the
fundraiser but didn’t really do more than show up.” 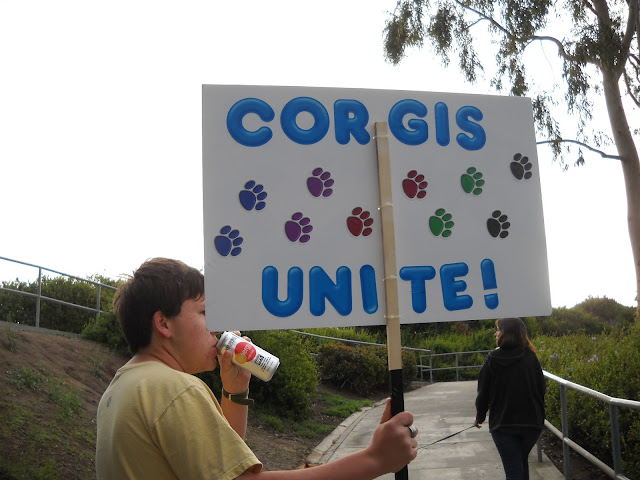 “As you and I
both know, Corgi people are great! Our group loves to gather for fun and
fellowship. Some are like I was; they just show up for the event.
Others are more driven and really try to get the money in for the
shelter, and I am especially thankful for those folks. Many on Team Low
Rider are shelter volunteers and their hearts are really in it.” 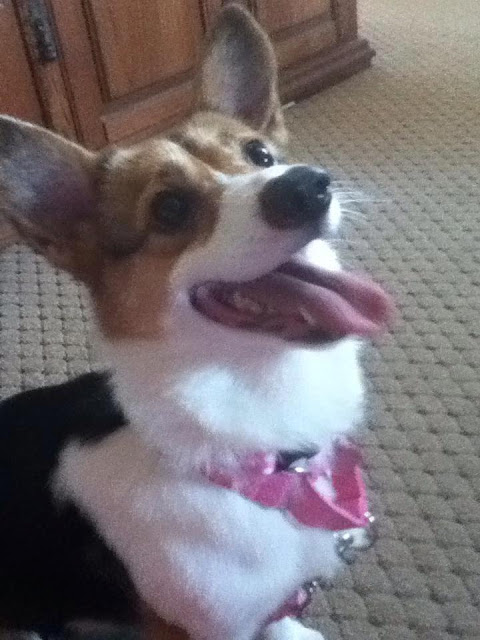 This year, there’s one more member of the gang along for the
FUNdraising. Adopted Connie is the newest member of Geri’s family. “We
got her recently from the Humane Society we’re
fundraising for. She’s a bundle of energy who loves to fetch!” 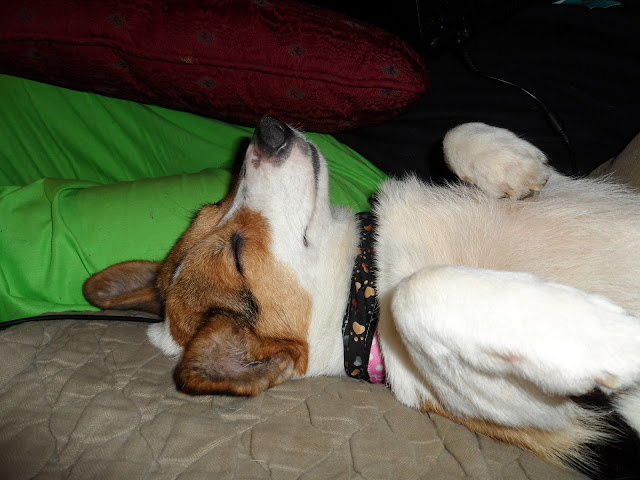 “Sidney and Connie get alone fine. They aren’t joined
at the hip or anything, but the squabbles have been few and far between.
Sidney likes to be close but not too close to his people, and Connie likes to be right in our laps. Good thing she’s small! I think Mom would have REALLY loved
Connie and her cuddly ways.” 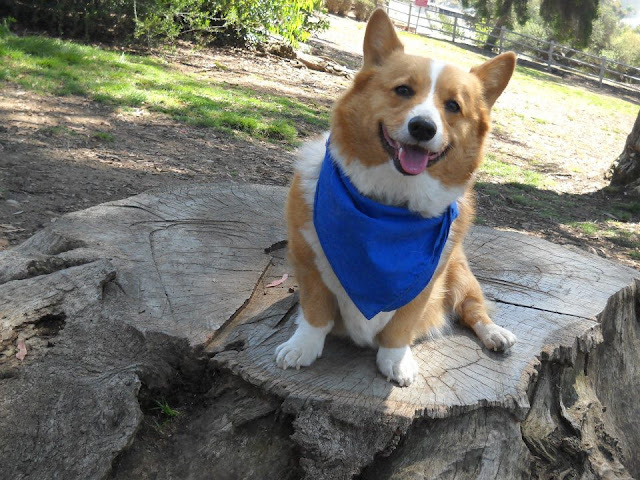 “Sidney has been doing photo shoots for his trainer’s latest book. I’ll
let you know when it’s published, but from what I hear the publisher
LOVES the Corgis. Sid’s lady friend Maggie is also going to be in the
book, so they will be well represented. Several full page pics!”

“That’s right. Your Sidney is a: Canine Good Citizen, Therapy dog, Rally-O dog, Calendar pin-up, a published model and fundraiser extraordinaire!” See? I can pick ’em. It’s not all about the good looks, though clearly my Sidney is no slouch in that department.

Ten year old Frankie stakes out his favorite spot on the couch. Flooftastic.   Jasper still looks a lot like a puppy, but he ... END_OF_DOCUMENT_TOKEN_TO_BE_REPLACED