Hiya, folks! Toby here. Have you heard about my big adventure yet? It’s been all over the funny pages Daily Corgi on facebook for a couple of weeks now. You might have seen it mentioned here on the Thanksgiving Day blog post.

Let me tell you … it’s been quite a ride. 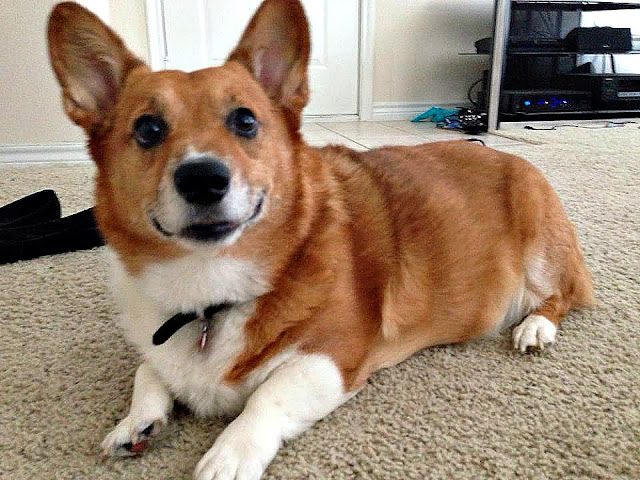 It all began back on November 22nd, when I was patrolling my backyard. Minding my own business — and everybody else’s too, including my little brother Tucker. 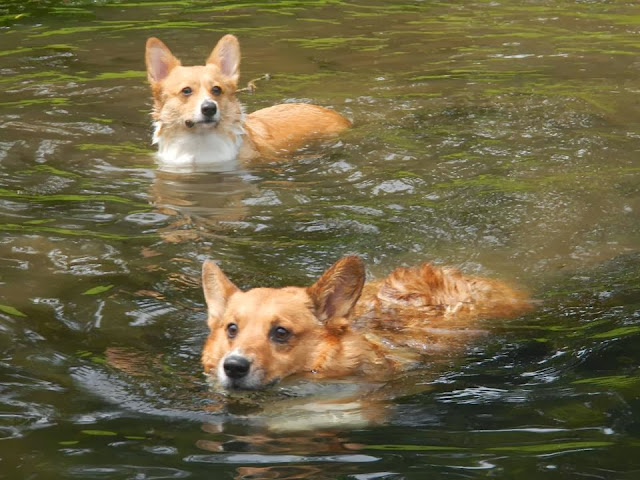 That’s him there with me in the picture. Small but mighty.

So like I say, I was in my own backyard. A fenced backyard at that. (Keeping the territory enclosed, always a good idea. Makes it easier for a dog to manage his business). Anyway, long story short, right there in my own backyard I made the sudden acquaintance of the very un-neighborly dogs next door. We got into some serious fisticuffs when they made their way through the fence (uninvited, mind you!) and clearly mistook me and Tucker for some kind of  pushovers. 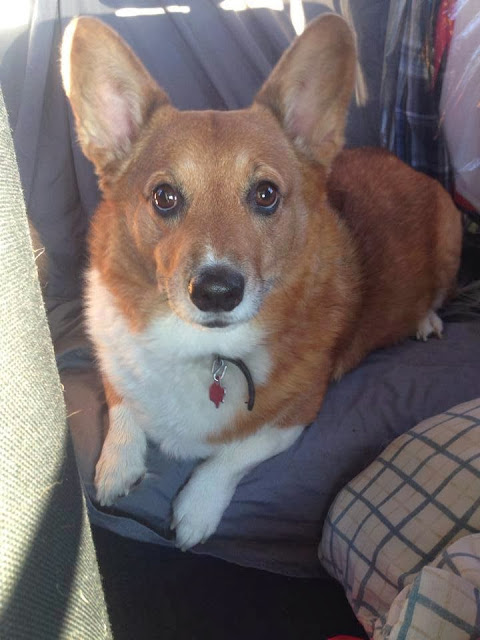 Who are we kidding, here? Hold the gravy, it was ON. A guy’s gotta do what a guy’s gotta do. Did we brawl? You bet your sweet bippy we did! Oh sure, they got their licks in. Three on one, I will concede that advantage. I took my knocks: lots of puncture wounds, a tear in my trachea, trauma to my chest and one of my back legs (which I nearly lost. It would have made a good war story). 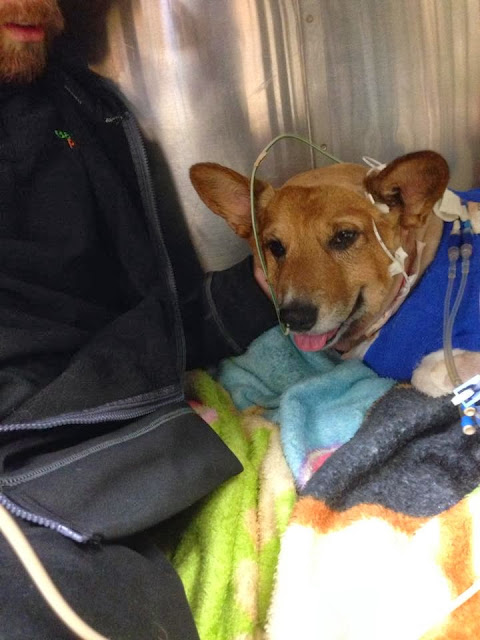 Landed me in the hospital, those hooligans did! Luckily, my handsome face was not affected. Helloooo ladies.Waste no time in declaring your intentions for a fella, do you? Girls, if you could bat your eyelashes in another direction for a bit, I’d appreciate it. All that twinkling action from pretty dames is enough to distract a guy from his Important Story. 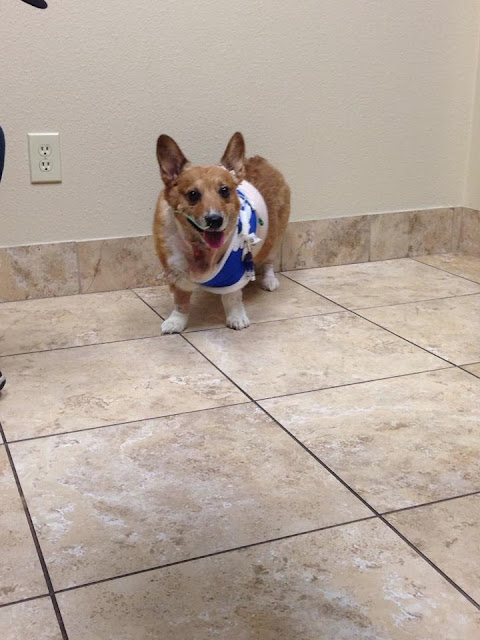 Anyway, so this VCA Metroplex Animal Hospital down in Irving, Texas, was a fairly swanky joint. As far as places where they poke you with needles, shave your butt and wrap you in bandages go, that is. 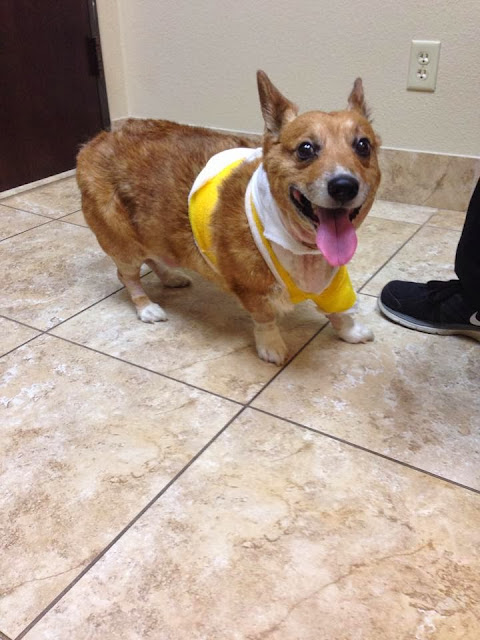 I got plenty of attention, not all of it awful. Some of it pretty special. Entre nous, I do believe I made an impression there. Left my mark, so to speak. As a Corgi will. 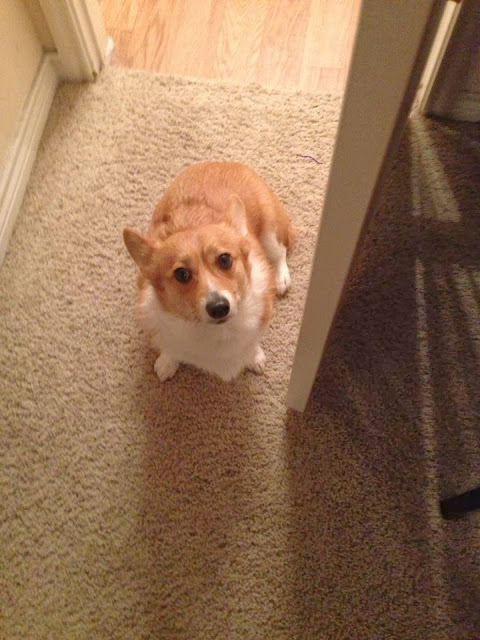 Tucker waiting for me. He’s a good kid.

While I was laid up, word of my valor was leaked on The Daily Corgi. Yep, Mom spilled the beans. I could have played tough guy all the way, but it made it easier on her and Dad for other people to know about what happened to me and Tucker. Humans can be emotional. When we’re not there to take care of them, they need reinforcements. So thanks, friends. You done GOOD. 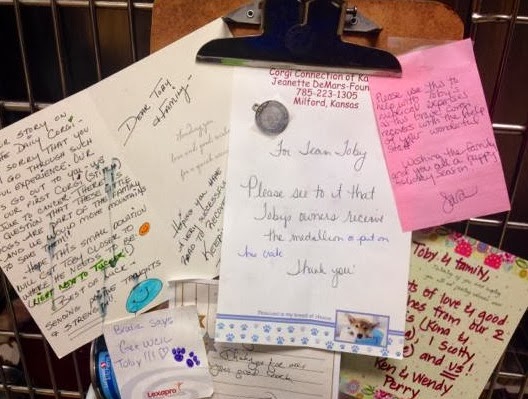 Just a few of the many notes and cards I got at the hospital.

I love my family like crazycakes!  Mom, Dad, Paw Paw Raymond, my grandmother … and Tucker. Well that goes without saying. Kid brothers can be pesky, but he held the home front down pretty well! Big job for a little brother, but (stating the obvious) he is a Corgi. Need I say more? That says it all. Whatever “it” is, a Corgi says it best. Repeatedly. Loudly. Because we are helpful like that! Any time. Day or night. Night or day. 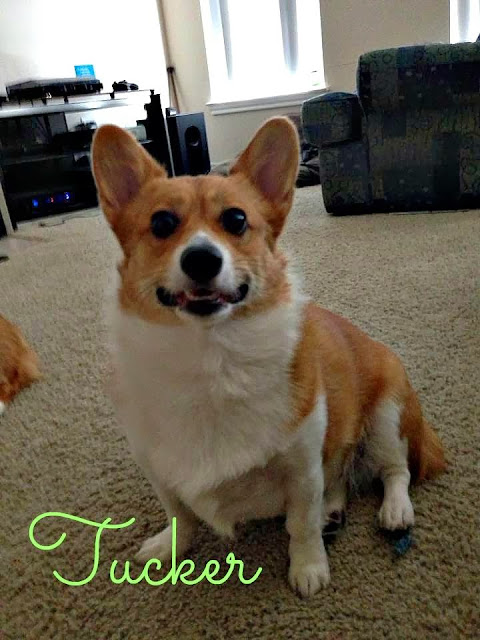 Tucker did a stand up job of keeping everybody updated as Co-Captain of the Team Toby facebook page.

Although I masterfully showed everybody I could walk the day following surgery, (video proof HERE), that convinced nobody I was ready to go home. Whining when my folks visited didn’t help either. Tic toc, tic toc, where’s the discharge papers, doc?! If I had cards, I’d have played solitaire. Gin rummy for one? Let me at it! The waiting was followed by more waiting. These doctors and their opinions. Their tests. Their relentless science. (Shudder). Once I was eating food from home again, that was proof enough for me that I was needed back there. My attempt at a break for the car on the first post-surgery outdoor potty run was a thing of great beauty. 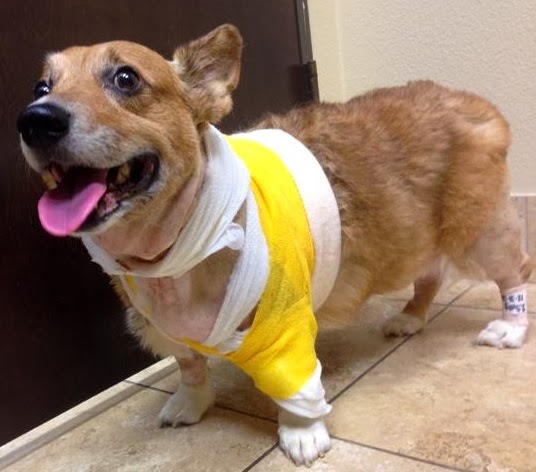 You should have been there. It was a staggering piece of work, a near epic Hail Mary pass. Foiled, but this close. Thhhiiissssss close.

I finally got officially sprung from the prison hospital on December 5th. Not a moment too soon, pass the peas with extra gravy please. Butter up those biscuits, brother — I was headed home, home, home, where the wild Corgis roam! 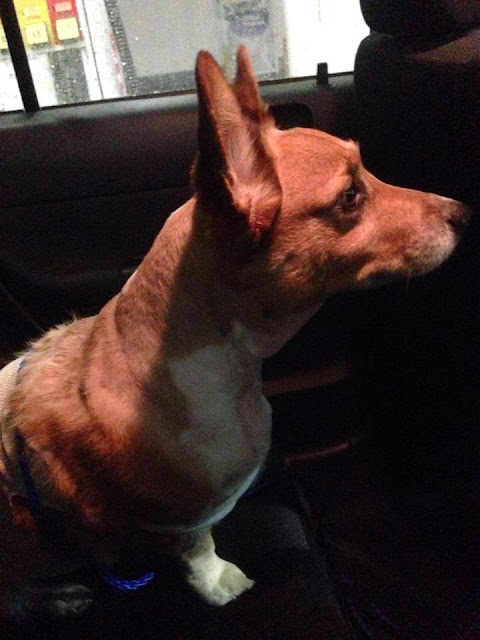 An ice storm (yes, in Texas) made the trip slow going, but we made it. HOME. On arrival, Tucker laid some serious sniff-whiffery on me to get a clue on where I’d been so long, and I made a beeline for the new toy. Business as usual. 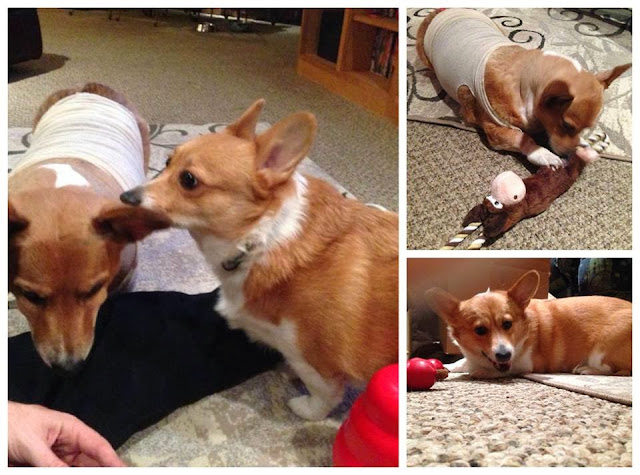 So that’s my story, and I’m stickin’ to it. I never saw any of it coming, but that’s how life is sometimes. It hits you in the eye like a big pepperoni pizza pie! I am on the mend. Not fast enough for me, but a little better every day. This ridiculous T-shirt I have to wear so I don’t lick at my stitches isn’t exactly fancy duds, but my admirers seem not to mind. (Hello again, ladies!) The furniture here is far more comfortable than the hospital bed, and much too inviting to ignore. You put a Corgi next to a sofa and ask him not to jump on it. What kind of fancy shows you been watchin’?! 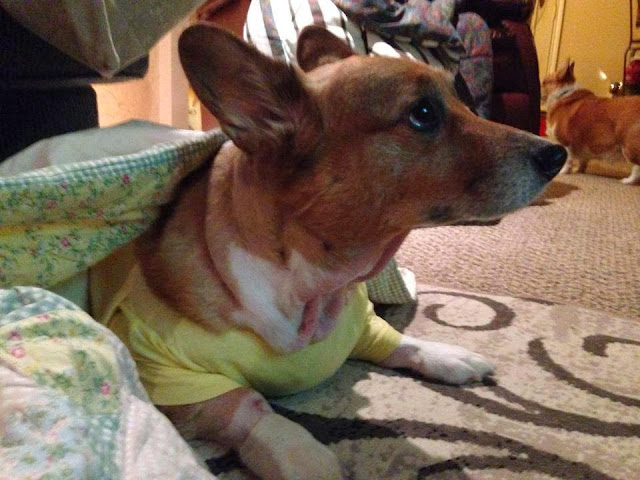 Oh, and one more thing. That fight was no bark in the park. We all know I gave those guys a serious showdown. And although I know next to nothing about money (other than it buys food, toys and gas for the car — who said RIDE?!?!), I figure it must have taken a lot of it to keep me in that hospital for so long. Even though they had no TV there — not even basic cable — the doctors and staff did what they needed to do to. I figure they must have their own dogs and cats (a pity) at home to take care of, and their piggy banks need pennies too, right?

Like I say, I’m not a finance guy, but I saw Mom and Dad looking really happy when they talked about how much money people gave them to save my life, and that was ACES. Five hundred people donated $17,000 in just 48 hours to the Go Team Toby Campaign fundraiser, organized by the (apparently Corgi-obsessed) lady who runs this blog (and is taking my bark-tation for the story). Not only that, dozens more called in payments or sent checks to the hospital too. None of them to buy biscuits (though Tucker did suggest it. Firmly).

There were more than a few zeros on that final bill. A whole lot of people they don’t know and might never meet sent them money for my bills. TRUE STORY! A Corgi knows when his people are happy, though the happy tears thing did throw me off some. It was some kind of Thanksgiving all-around wonderfulness, even though I wasn’t at home to help finish off the turkey.

There will be double portions next year, naturally. 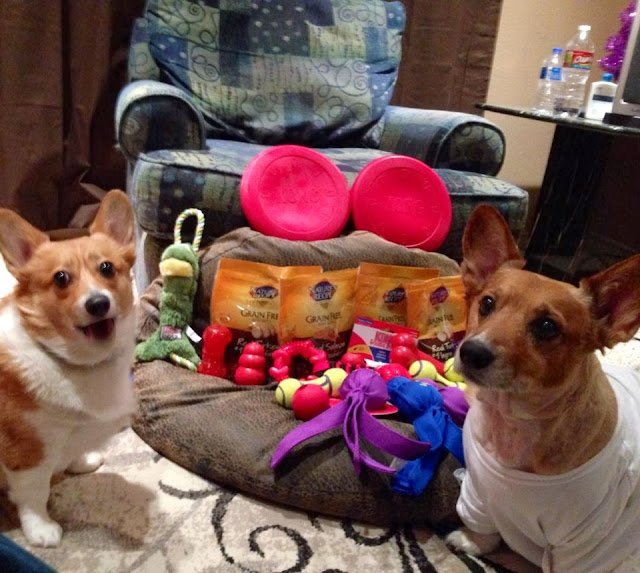 The Daily Corgi also donated profits from sales of customized Daily Corgi sweatshirts and blankets to raise money for a box of toys and treats for Tucky, and on top of that some people sent money for his “TLC box”. That package from Petco was the stuff of a dog’s dreams, and as brothers, of course we’ll share it. (Can you see the “Christmas morning” look in our eyes?) I hear a comfy ortho bed for me and some dog blankets are on their way soon too. Sounds swell!

If you’d like to spread more smiles and help celebrate what some are calling my “hero story” (though I just did what any stand up guy would do for his brother), you can send my folks and the people at the hospital holiday cards. Find out how at the Holiday Card Drive facebook page HERE.

So many of you put smiles on their faces, which puts a smile on MY face. And we all know there isn’t much better than a Corgi smile. That’s just a fact. Look it up. There is plenty of proof. Right on this here blog, in fact.

Yours with love and buttered biscuits,

Toby the Brave of Texas

Ten year old Frankie stakes out his favorite spot on the couch. Flooftastic.   Jasper still looks a lot like a puppy, but he ... END_OF_DOCUMENT_TOKEN_TO_BE_REPLACED