In her work as President and Rescue Coordinator of Florida’s Sunshine Corgi Rescue, Sam Bates works tirelessly at the “front lines” on behalf of Corgis in need.  Today she shares the story of three special Cardigan Welsh Corgis who found better lives through the efforts of Sunshine Corgi Rescue, in the hope of opening peoples’ minds to the rewards of foster and adoption opportunities.

Sam and the entire Sunshine team have my grateful admiration for the work they do every day, and I’m glad to have the chance to share with you what they do!  Please support the good people of rescue in the life-giving work they do for neglected and abused dogs. 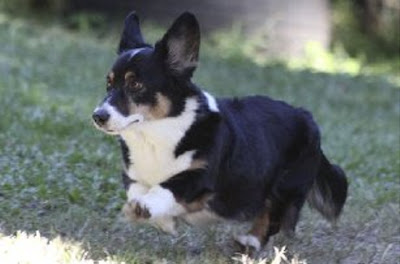 “Sunshine Corgi Rescue got a call from a person who had picked up four Cardigans from what appeared to be the beginnings of a kennel breeder.  One was aged and adored by the rescuer and the other three were young but absolutely terrified of almost everything.  The first picture I received was of three Cardigans huddled in the corner of a bathroom where they were being kept until they found a bit of a comfort level in their new surroundings. This was a single rescuer who didn’t have room for all four dogs and asked for our assistance.”
“We managed to work out a transport to get the three young dogs to west central Florida, where I would foster one of them and two of my foster homes would take the others. All of us have experience in working with frightened dogs and knew we had our work cut out for us.  The rescuer assured us that the dogs had shown no fear aggression.”
“We traveled to the foster who helped with the transport and picked up our new little pals.  There were three females.  Two were litter sisters and four years old.  The most frightened one was two years and absolutely terrified. Though they found some comfort in each other, they really needed to be with confident dogs able to help them accept a new environment.  I’ve found that good, solid dogs with nice temperments are such a help with frightened dogs.” 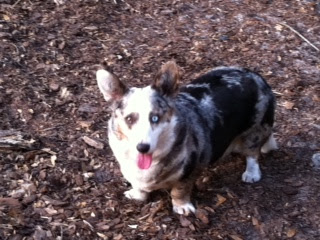 “As with all new fosters, we crated them in a common area of the home so all the dogs could become familiar without danger.  One of the litter stayed at the back of her crate when I came near. For several days she wouldn’t eat. I started taking her outside with one or two other dogs and she seemed a bit more comfortable in their company.  I finally introduced her to all the dogs and allowed her regular house time.”
“It soon became obvious to me that the dog I took home wasn’t even remotely familiar with typical noises a person makes.  She would stiffen and bark if I sneezed, coughed or even blew my nose. Many household noises were concerning to her. She stayed very close to the dogs and wasn’t very interested in making friends with me. I started with the food that she now wanted and made her come to me before she would eat.  She would duck when I pet her, so I tried to pet her under the chin. That seemed a better way to approach this girl. She would take a pet or two and be off with the other dogs, and only approached me when the other dogs did.” 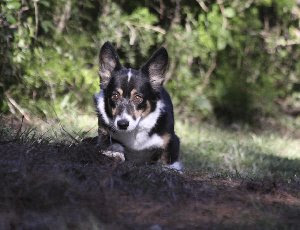 “I wasn’t sure I would ever get her to be a solid enough dog to place for adoption.  It was at least six months before she would even look me in the eye.  She did allow me to groom her, bathe her and take her for walks.  At times she would stop on lead, so I always brought another dog along to help her have confidence.  She never tried to walk in front and always lagged behind the other dogs, but she did keep on walking.  Not long after, she began to show signs of playing with my youngest Corgi. I actually saw her tail wag and engage in games of chase and was so happy for her, knowing she was becoming a real dog!”
“Finally, at meal prep time she joined us in the kitchen waiting for the meal to be readied and served. She actually started looking me in the eye and actually licked my leg. She also began after-meal celebrations where she would run around the house barking happily and trying to engage in play.”
“By this time, I’d had this girl with me for nearly a year.  I knew she had found happiness and comfort here and really didn’t want to make her get used to a new place once more.  She gets along with all the other dogs, is up for meeting new people and seems comfortable to go most anywhere, as long as one of my other dogs is with her.” 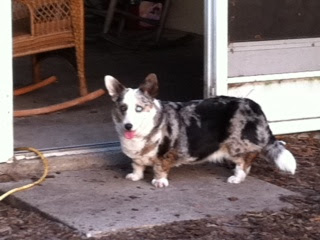 “Now I can use the blow dryer, blow my nose and cough — all without a problem. The printer still will evoke a little woof from time to time.  She gets very upset if I scold one of the other dogs and shows a very definite negative behavior of stiffening and barking and coming toward me.  I think it may be a defensive move from her past. I always put my hand down for her and she relaxes immediately. She’ll always have some little quirks but I have learned to adore them. She is a vocal girl with quite the high pitched bark; we are still working on that and a few other behaviors, but she is always near and trusts me, probably more than she has ever trusted before.  She still stiffens when I pick her up, but joins us on the bed for weekend Corgi nap time.”
“I’ve stayed in touch with the other foster homes.  One decided to keep her girl for the same reasons I did. The youngest and most fearful got lucky this past February and met a lady she was immediately attracted to. A trial adoption was arranged and within two weeks she was sleeping in bed with her new Mom.”
“We were so blessed that these dogs landed where they did.  Most rescues may have been neglected but very few abused.  I do believe that these girls were abused and took a very long time to trust.  I think they’ll be somewhat on guard at all times, but those reactions are happening further and further apart.  Two of the girls have been in their new homes for fourteen months and have lives so much better than they did before.  I think all will live good, long and loving lives now.  Sad that ten dogs had been left in the ownership of the person who relinquished these dogs, but saving the four helped them greatly.” 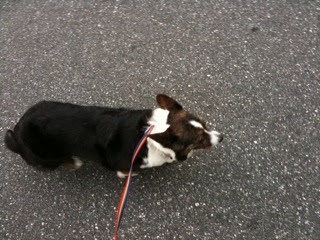 “The dogs seem to know we want to help. My girl generally lays where she can see me at all times. Yep, I flunked out in fostering 101 once again, but I do know that I made a difference in this dog’s life.  I hear about the others from time to time and they are doing well, too.  It is amazing what some time, love and patience can do.”
Note: This post first appeared on The Daily Corgi in June of 2012.

Ten year old Frankie stakes out his favorite spot on the couch. Flooftastic.   Jasper still looks a lot like a puppy, but he ... END_OF_DOCUMENT_TOKEN_TO_BE_REPLACED