Some faces launch a thousand ships. This one lunches on door mouldings and sofa pillows. 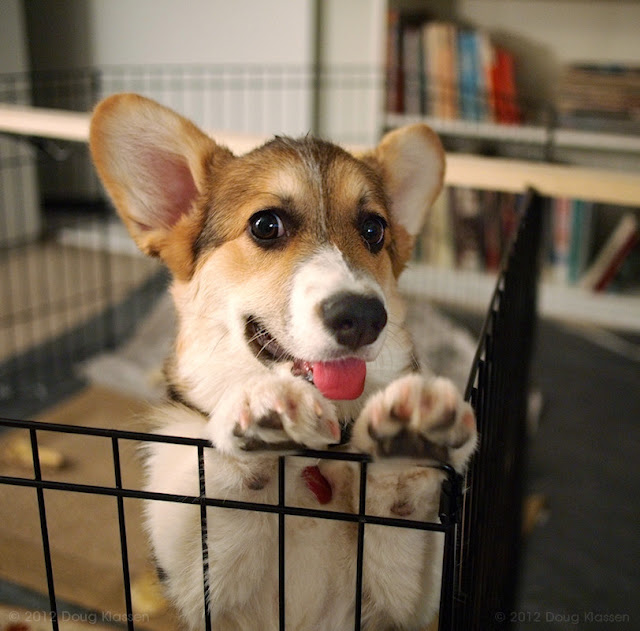 “A pup’s gotta chew what a pup’s gotta chew!”
Sparkle the adorable house wrecker really (aka Bramanor’s Black Diamond) is from a long line of champ-eeee-yon Corgis, and has so far distinguished herself as a fierce enemy of carpets and tireless playmate to her uncle Gromit, the other Pembroke Welsh Corgi in lucky Doug K.’s life. 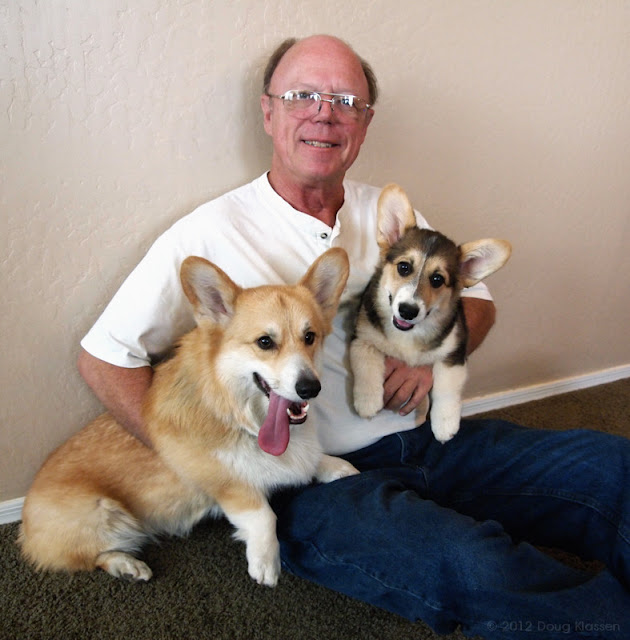 Two men and a baby:  Doug, Gromit and Sparkle
“Sparkle is a wonderful, funny puppy, with more life and personality than Gromit and I put together” says Doug.”I’ve always loved having two Corgis, but life conspired against me and I wound up with just Gromit.  After spending his first two years with a wiener dog pal, he was quite sad to be the only dog in the house, so I purposed to get a second Corgi and get back to having two bunny butts in the house.  It took a full year and some false starts, but it worked out at the last minute in April that Sparkle, then about four months old, could come home with Gromit and me.” 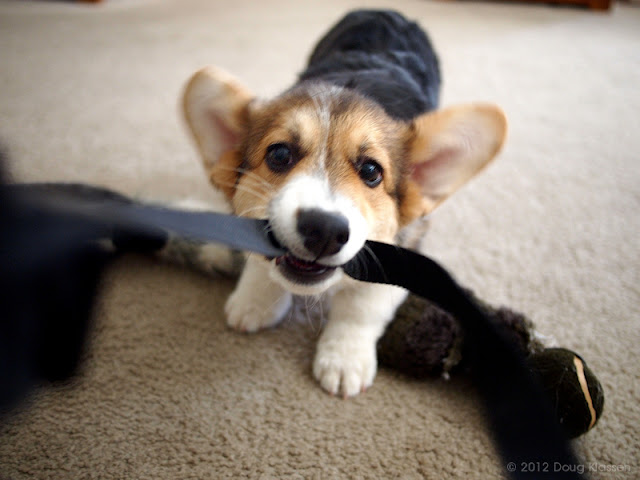 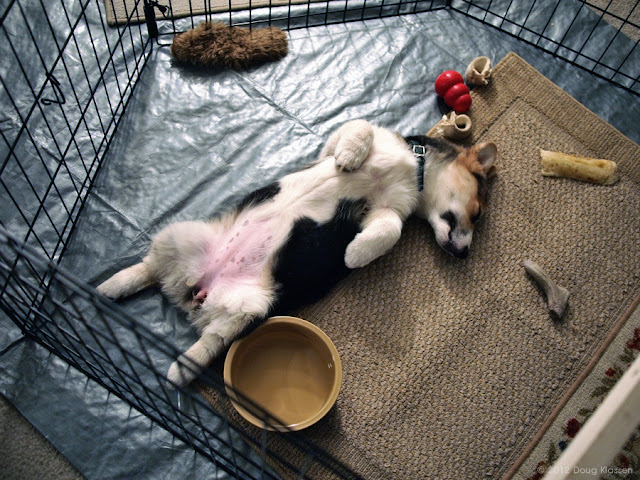 “I have FLOPPED!”
“Her name is a small homage to my beloved heart dog Tinsel, so named because she was born in a Christmas litter.  When I got Tinsel at two, I wanted to change her name.  A single guy with a Corgi named Tinsel might be viewed a little differently in some ways, and I only wished to attract ladies.  Anyway, Tinsel defied being renamed. In fact, her personality and eyes were as bright and sparkling as tinsel on a Christmas tree.  So Tinsel she remained until her last day.  I was man enough to deal with it.”
“My new pal Sparkle is actually Tinsel’s great-grand niece, And that’s why Sparkle is named Sparkle.  To be honest, half the time I call her Sparky and also Spark-a-dog, but she comes to Sparkle just fine and her eyes and smile are as bright and happy as her great-aunt Tinsel.” 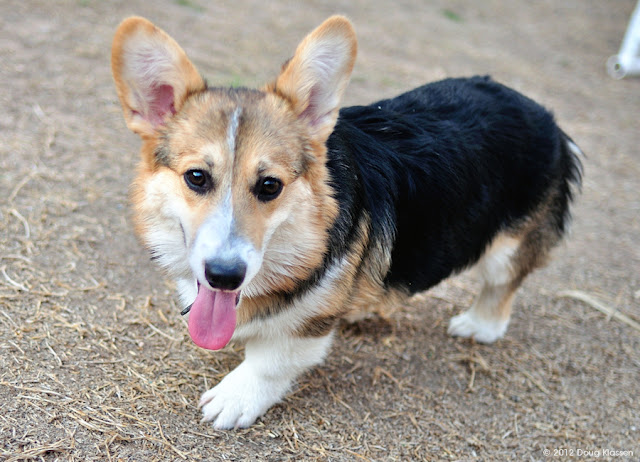 Like Sparkle, Gromit (a Daily Corgi alum) is also related to Tinsel and Watson, the other of my first two Corgis.  It’s fun thing to know that all my Corgis are ‘family’.”
“He is genuinely thrilled to have a fur buddy again. With Sparkle in the house, Gromit has returned to his  naturally happy, frapping self.  Almost from the first night she arrived, they’ve been playing awesome games of chase and tug.  What Sparkle lacks in size compared to Gromit, she makes up for with a whole lot of Corgi spunk.  She figured out early on that he was a safe playmate, and they haven’t let up since.”
“Sparkle is a climber who loves to get up on things. Things like the sofa, a patio chair, or the bed. Unfortunately, her first time on my bed was so fun and exciting that she peed.  Not a happy moment for me. When I told her she was a “puppy brain” she just smiled.” 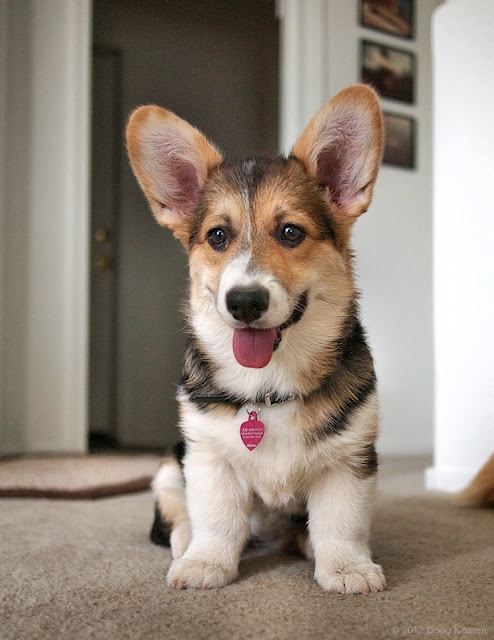 “In typical Corgi fashion, her sweet face belies a mischievous side. She’s stolen my tennis shoe three times, and so far I’ve caught her before any damage.” 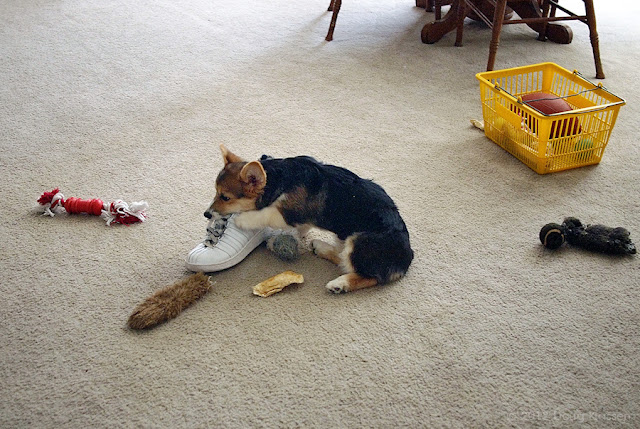 “Sparkle loves exploring Gromit’s Corgi sized agility course, especially the tunnel and dog walk, but I don’t let her jump or do anything like run the course yet, not until she’s past a year old.  She was chasing along with Gromit one day and as he ran up the teeter totter she charged around it to meet him on the other end but ran under the descending end and got quite a smack on the head.  Fortunately, 600 years of being kicked in the head by cattle has left Corgis with nice, thick, skulls.  Since that episode Sparkle has avoided the end of the teeter totter when Gromit is on it.” 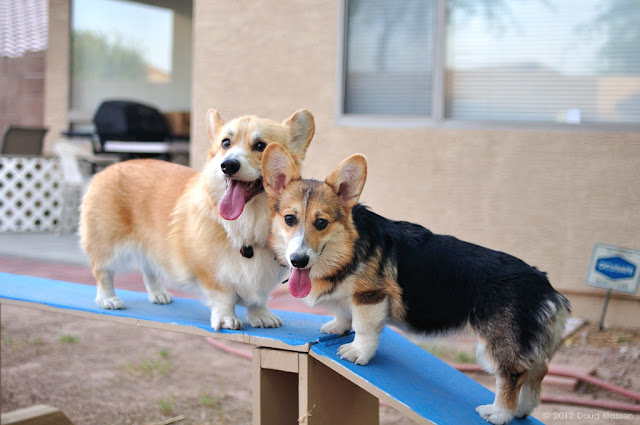 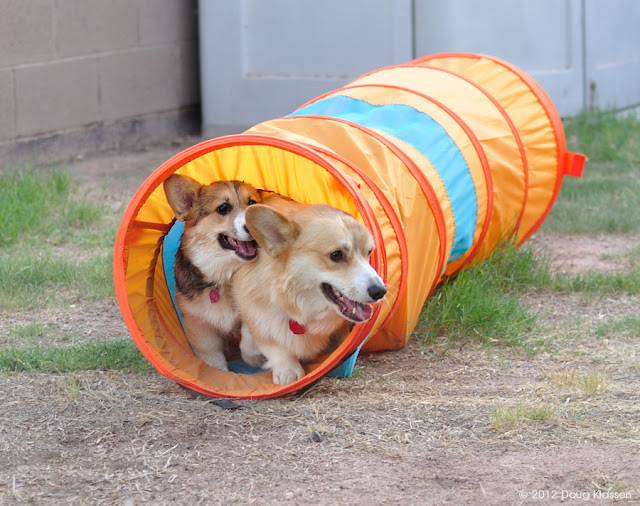 “At the moment, housebreaking is going a bit slow with Sparkle. She loathes our miserable Arizona summer, so going outside on her own (we have a doggie door) isn’t something she does willingly in the heat of the day. I can’t blame her; when it’s 108° outside I wouldn’t want to go out there in a black fur coat either! She’ll eventually get there with the housebreaking and all will be well.  I was going to get new carpet this winter anyway … “ 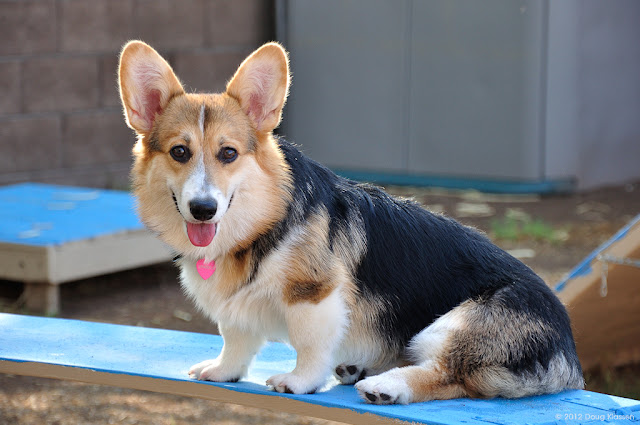 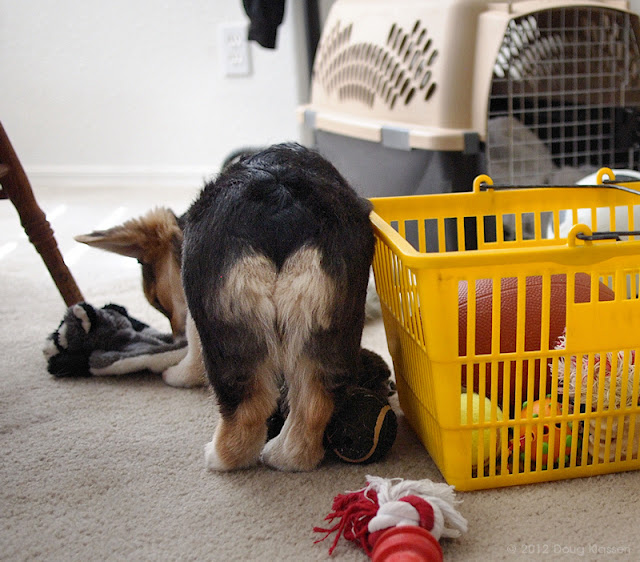 “We are all anxiously looking forward to Fall weather, the annual Arizona Cactus Corgi Rescue Picnic, and all manner of good Corgi fun together!” 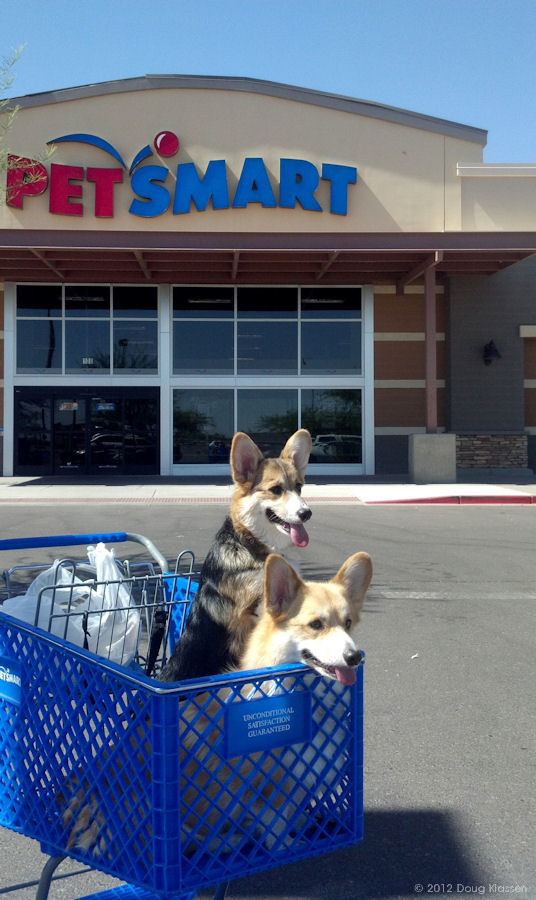 I’ll take two to go!
Note: This post was originally published in August of 2012.

Ten year old Frankie stakes out his favorite spot on the couch. Flooftastic.   Jasper still looks a lot like a puppy, but he ... END_OF_DOCUMENT_TOKEN_TO_BE_REPLACED