For months after she and husband John lost their Schipperke mix Bear, Ann Weber had been sneaking furtive peeks at dogs on Petfinder. Dumped on their street as a puppy 16 years earlier, Bear had turned Ann from a cat-only lover to a confirmed “bi-petual” with room in her heart for dogs. With their adored companion gone, a dogless existence was not to be borne.

Still, after such a painful loss they were hesitant to jump back in. They would wait a few months, maybe foster … ease back into it. Until the day last Summer Ann spied Gracie’s face peering out at her from the computer screen. 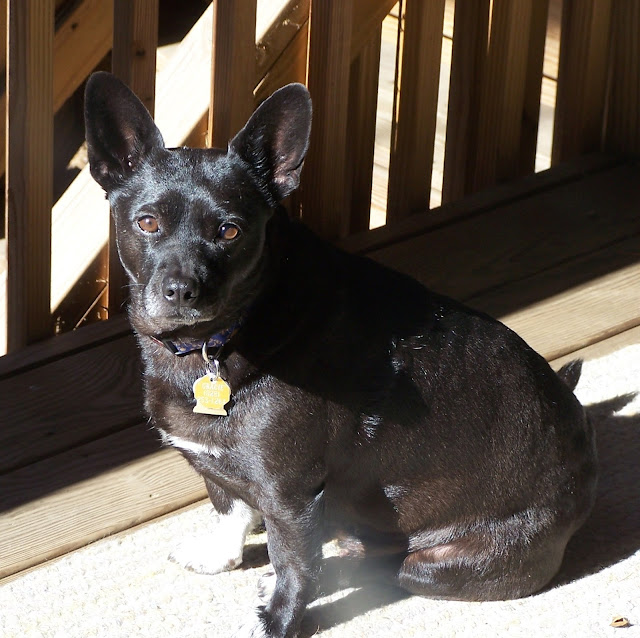 “Honey,” she called out. “Please come and take a look, just at this one dog.” John rolled his eyes, but hung up the dish towel and joined her at computer. There at the top of the Petfinder page was a thumbnail image of a little black dog with a solemn expression. He did a double-take.  It was Bear’s face on a Corgi body. “Oh,” he said. “Oh!”

And that, in the Summer of 2012, was their first look at Gracie.

“She was just 60 miles away from our home in Asheville, North Carolina. ‘Email them’ John urged, ‘call them!’ According to staff at Greenville County (SC) Animal Care, the nameless little black Cardigan with the white front sock had been turned in with an age (8 years) but no name, and was still waiting after almost two months. ‘No one wants an older dog,’ they explained.”

“And she gets nervous around little kids,” the staffer continued.

“What time do you open tomorrow?”

It was only a one-hour drive. We got there early the next day.

“On arrival at Animal Care, we were treated like royalty. ‘Are you the couple from Asheville? Hey, these are the people from Asheville!’ The staff were incredulous. ‘I told her about’ you said one staffer. ‘I’ll go get her.’ We waited like nervous interviewees.” 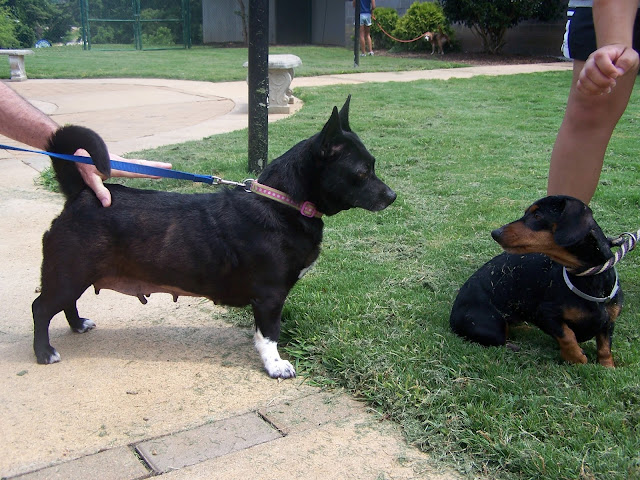 “Amid the bustle of fluffy puppies in young families’arms, at last came the older black dog, trotting along — then seeming to freeze and gaze right at us. I heard a chorus of angels. (Don’t laugh. The angels don’t like it). She raced up and embraced us, leaning up in that 3-inched way of Corgis. We were to learn a lot, and very soon, about Corgis. She responded right away to the name Gracie. It was hers, and she was ours!” 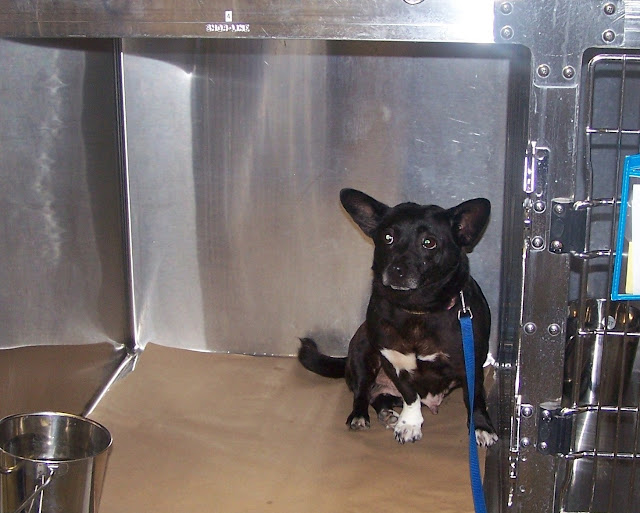 “One last question before we left for home. “May we see her old cage?” Though already on her new leash, Gracie suddenly hopped back into her old shelter cell, sighed and looked downcast. We realized with dismay this must have happened many times before. She’d been “tried out,” walked around, and returned. “Hey, you, get out of there,” we said. “You’re coming home with us!” 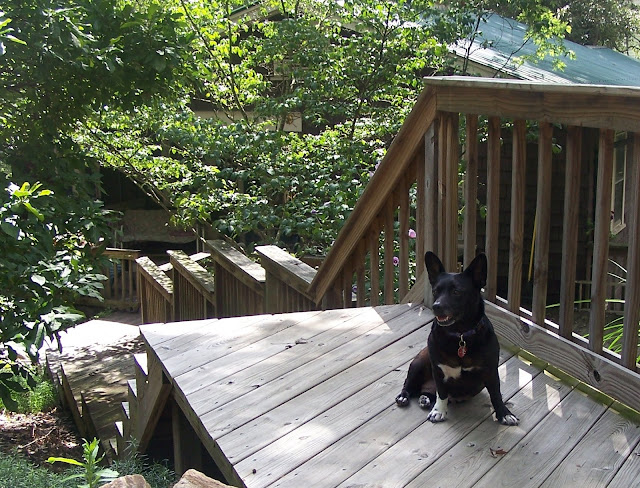 “On the ride home, when she finally tired of her vigilant gazing at the passing mountains, I felt Gracie slump in my arms and fall asleep. When she woke, it was to a world with her own yard, gardens, and a couple of cats ready to smack her into shape. Her innate Cardigan noblesse would serve her well against the likes of Mina and Ilse.” 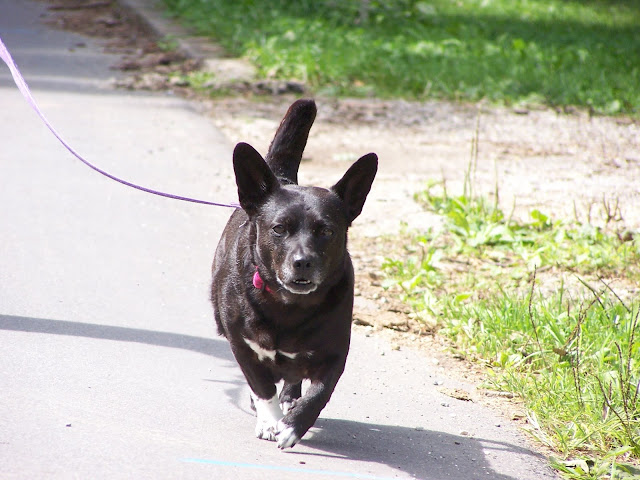 “Gracie has brought nothing less than vibrancy, vision and genuine comedy to every moment of our lives here: jaunting along neighborhood streets, choosing among the inventory at the veterinarian’s office, and entertaining the staff at the local pharmacy.” 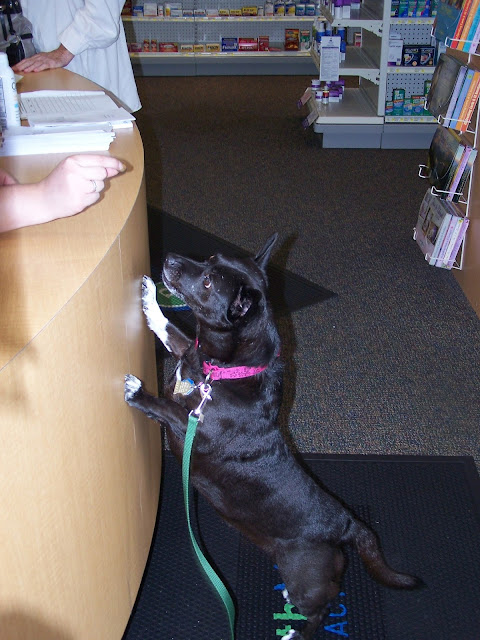 “They were the first establishment to welcome Gracie indoors – possibly as a pharmacist’s assistant trainee! She’s much loved by the staff there.” 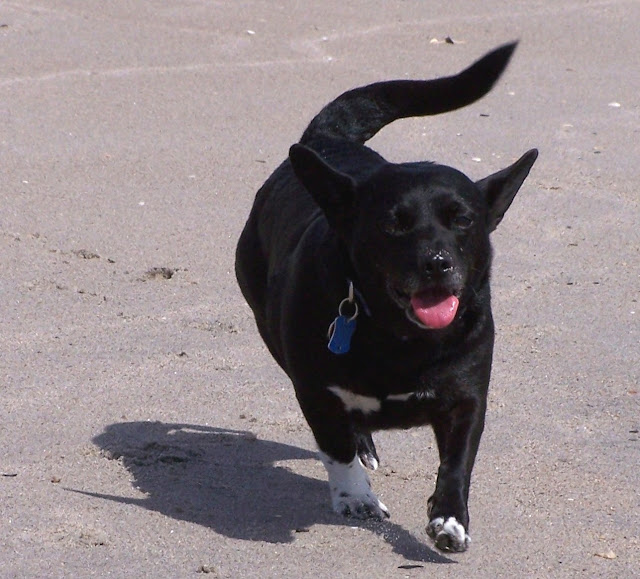 “She’s rejoiced in what we think were her first ever beach visits, dancing and delighting in sand and surf.” 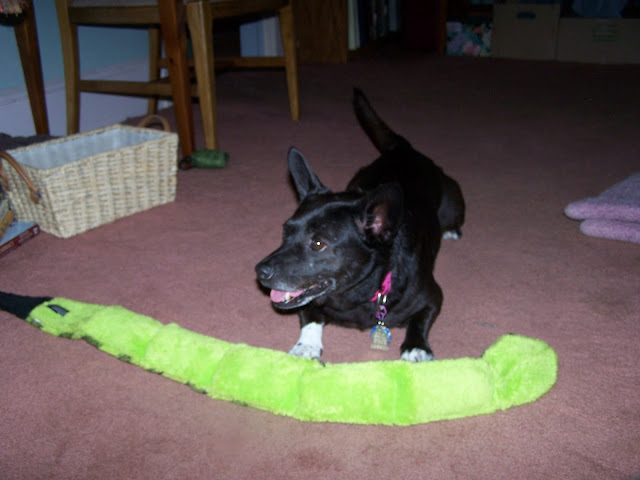 “When she’s not playing with every toy and puzzle in her basket, valiant Gracie protects us from those sneaky squeaky snakes.” 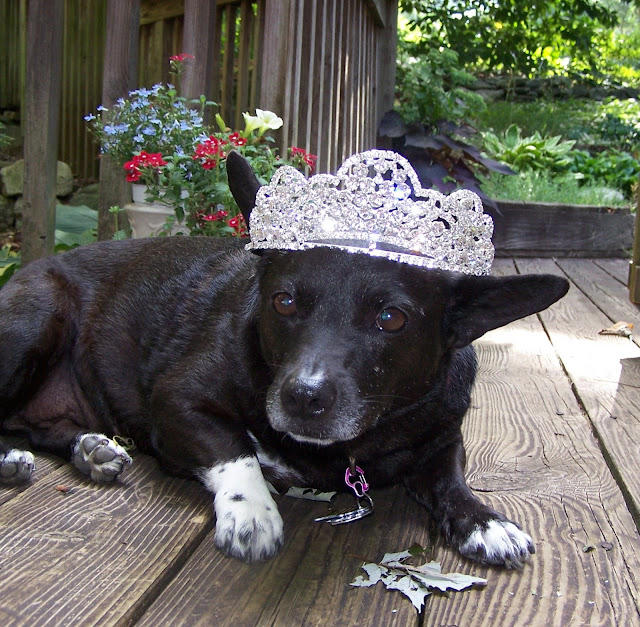 “As royalty (in our hearts), Gracie likes to sleep late. Once up for the day, she cavorts and explores. She is certainly the most affectionate companion animal we’ve ever loved. Her late Aunt Bear, whom she “brings back” in so many ways, would be pleased. Or at least bemused. And of course, who can resist that wagging Cardi tail?” 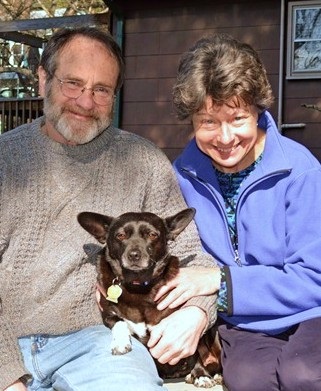 “We’re crazy about Gracie; no doubt the feeling is mutual. As a fortunate family, we hope everyone who can do so will consider adopting an older shelter pet to complete their own clan and discover for themselves the kind of love, happiness and seasoned good humor that have brightened our days.”

This post originally appeared on The Daily Corgi on 8/7/13.

Ten year old Frankie stakes out his favorite spot on the couch. Flooftastic.   Jasper still looks a lot like a puppy, but he ... END_OF_DOCUMENT_TOKEN_TO_BE_REPLACED