Beautiful Cardigan Paula made her Daily Corgi debut back in February of 2012 and followed up with a second, winning appearance in September. Something about that glorious face — and the utterly heartwarming love of her “girl” Sophie — grabbed me and wouldn’t let go. (As if it’s some big secret that I love kid + Corgi photos and stories!) 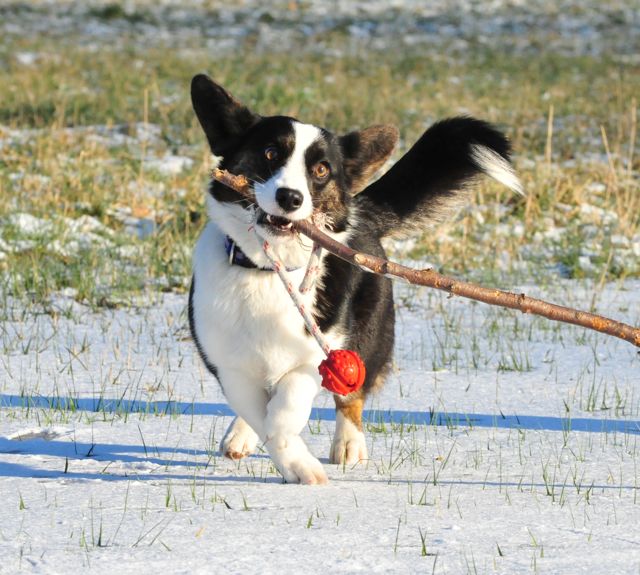 Anyhow, Paula and her family participate in shows, and among the friends they’ve made there are Mandy and her awesome sauce’um Cardi duo Hazel and Froop. Mandy is too shy to brag about them, but Sophie’s Mom Susanne isn’t … and she’s got some phenomenal photos to boot. Paula has made fast friends with Hazel and Froop, and today I’m excited to have their International Corgipants on the blog … Corgi Nation truly is worldwide.

Take it away, Susanne! 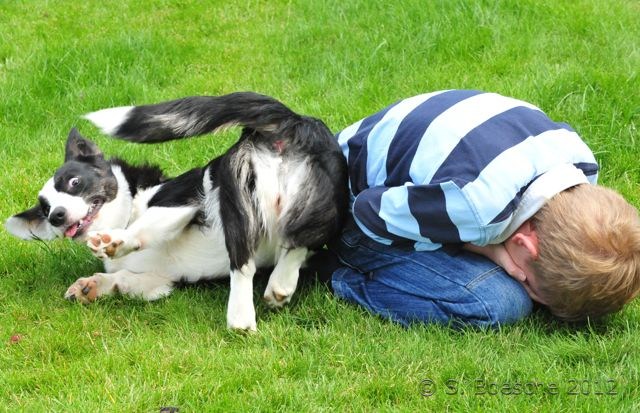 “May I introduce you my Paula’s two best friends, Hazel
and Froop. Because their Mom Mandy is so shy, it is my pleasure to tell you something about this trio.” 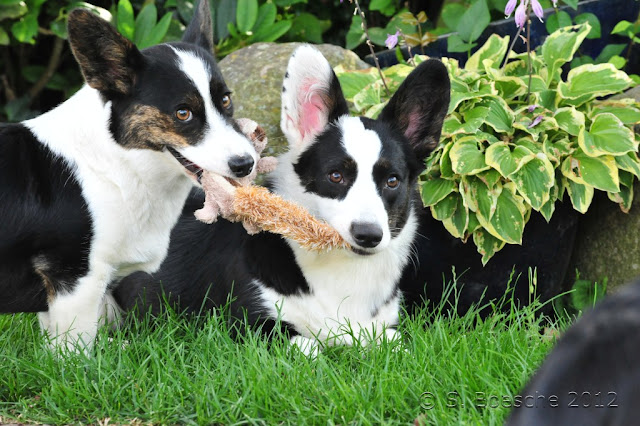 “I met Mandy and Hazel
at a show. It was Paula’s first appearance in the ring and I
was completely nervous. Mandy had a very nice
Corgi named Hazel, and we struck up a conversation. When the show finished I forgot to ask her for her
telephone number, but eventually tracked down her e-mail. Since then we’ve become quite close, simply because we both love Corgis.” 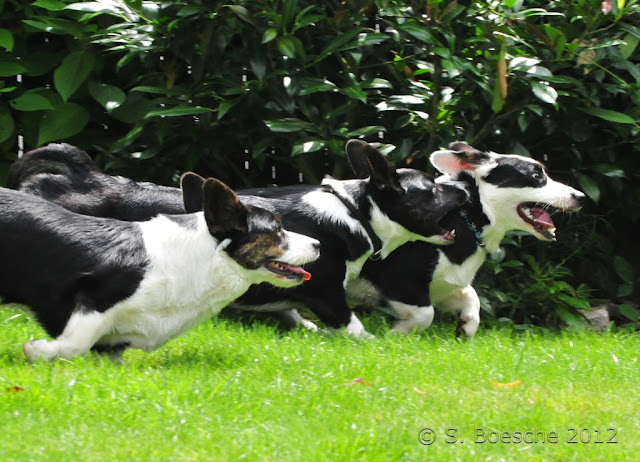 “We
meet just for fun while we talk about this and that (mainly
about Corgis), as the three Corgis play their special games, and go to
shows together, supporting one another.” 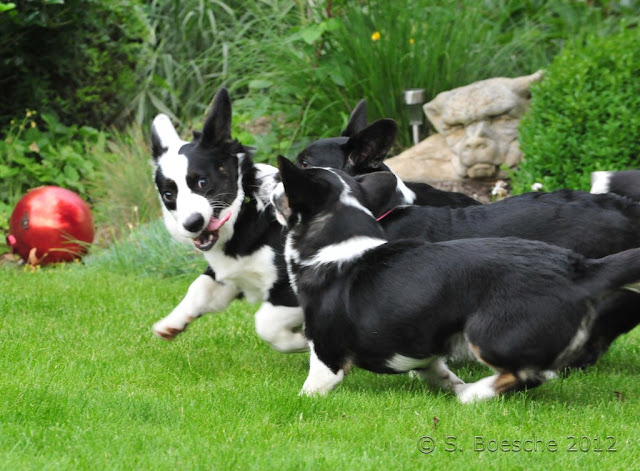 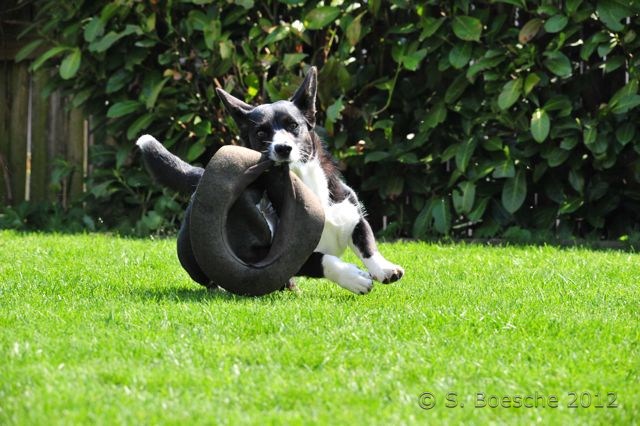 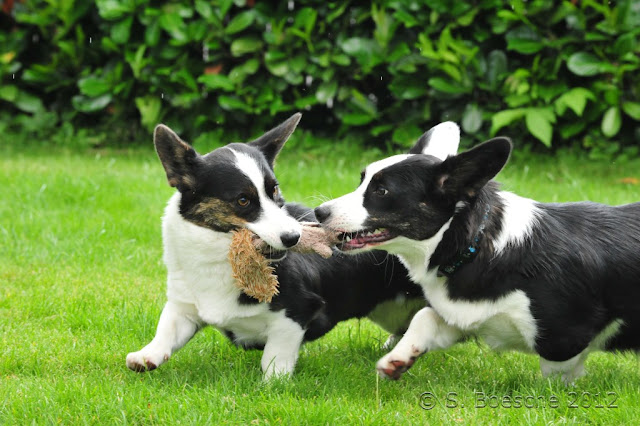 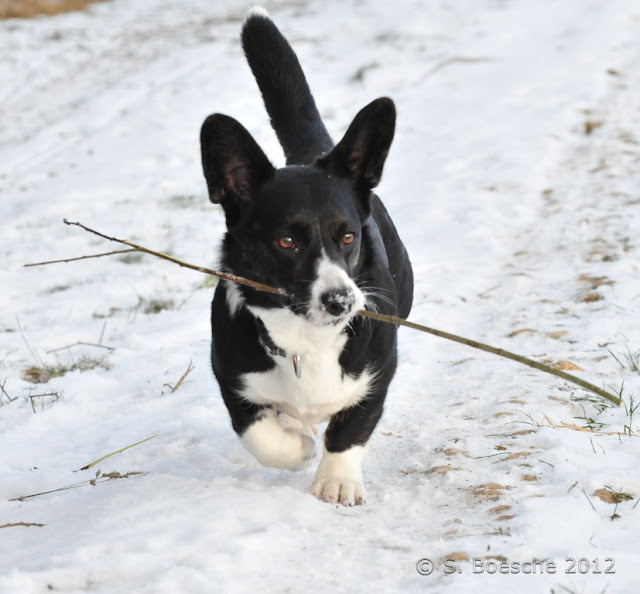 “Enough about the human beings, I wanted to tell you something about the Corgis! Hazel
was born in Germany in September, 2010. She seems to be a quite
serious character. Do you know Fraulein Rottenmeier from the world
bestseller “Heidi“ by Johanna Spry? Fraulein Rottenmeier is
the epitome of a strict teacher. Hazel is sometimes like this, especially if Paula and Froop, the younger ones, chase each other. If Paula could speak she would say Hazel
is a kind of a swot. She easily learned a lot of tricks and does
everything to please her Mom Mandy.  Now and then she has her five
minutes and fools around with Mandy or her little sister Froop.” 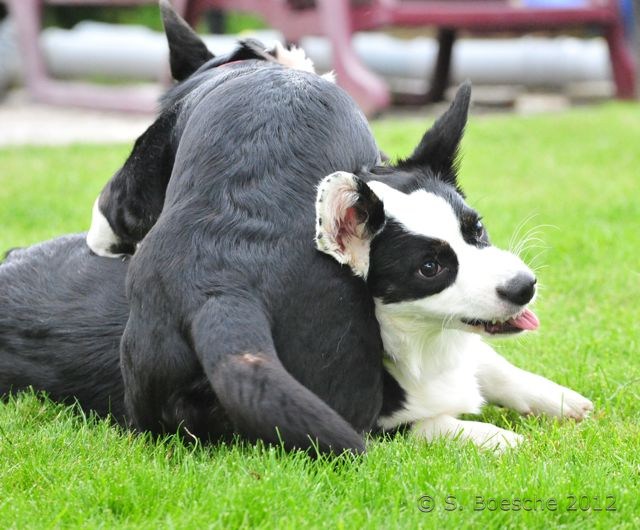 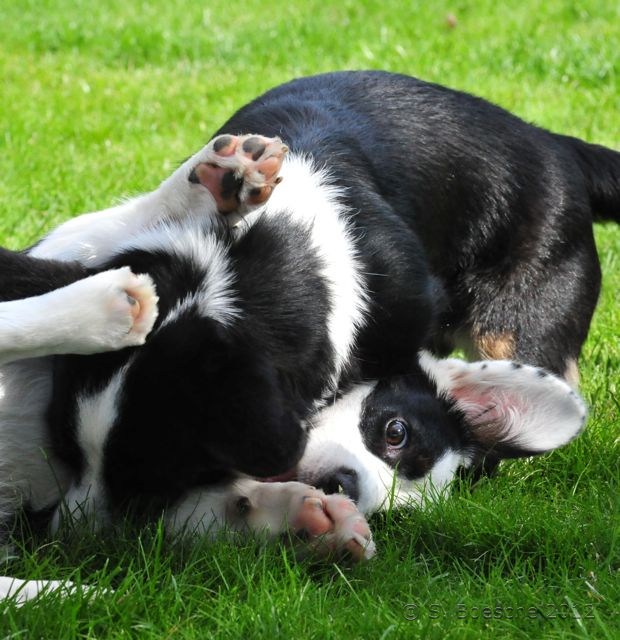 “Froop
is the complete opposite. Born in the Netherlands in November, 2011,
she came to Mandy‘s place in January. She is a typical little sister
(I know what I‘m taking about) and a clown. While Hazel
got this beautiful name, Froop was named after a yogurt. One day Mandy was pondering on names for her second Corgi in the company of friend who was eating a
yogurt. “Why not name her Froop?” she asked. The rest is history.” 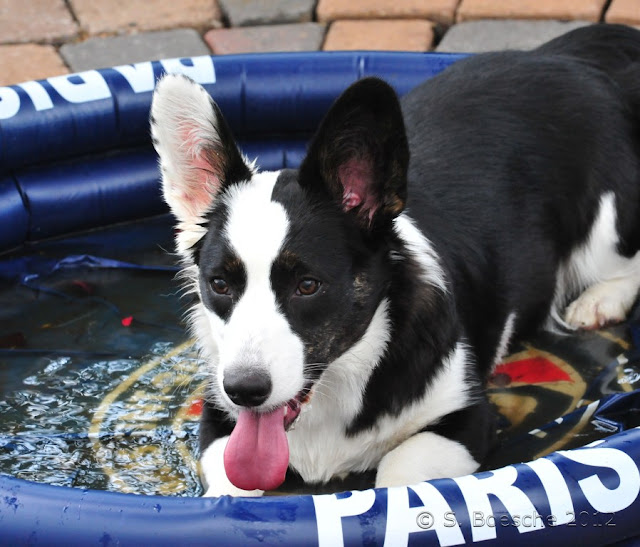 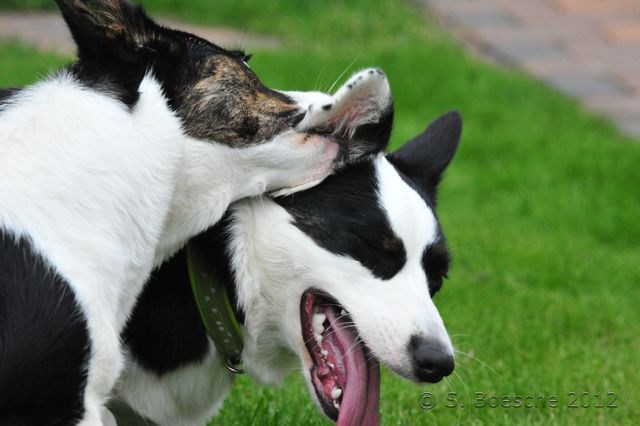 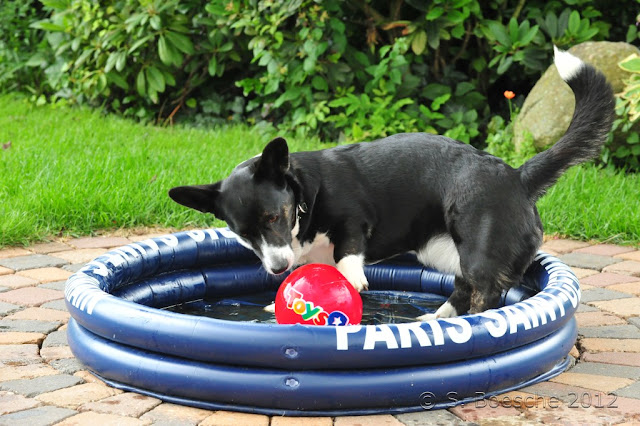 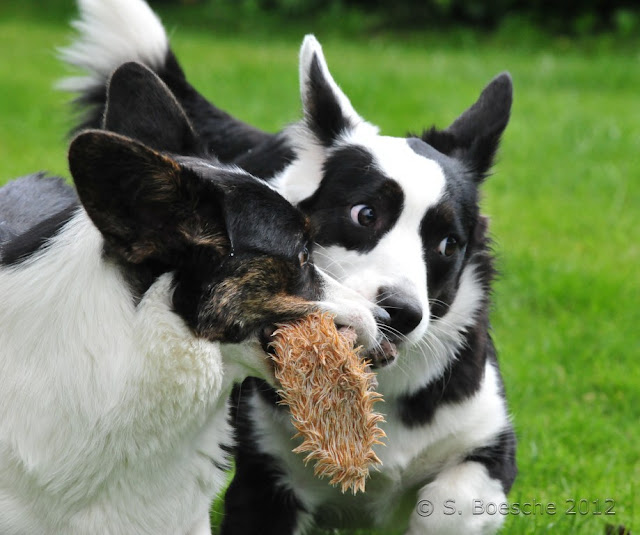 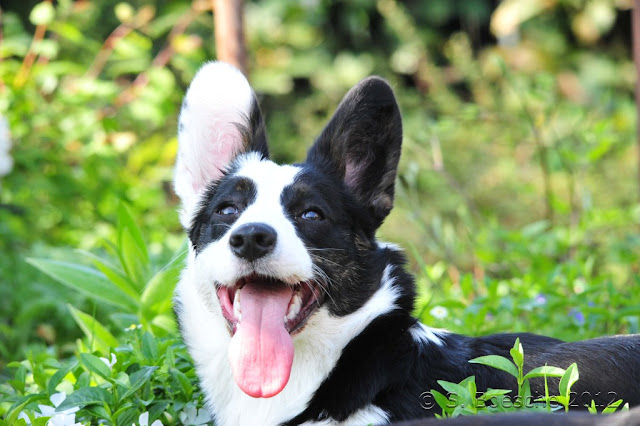 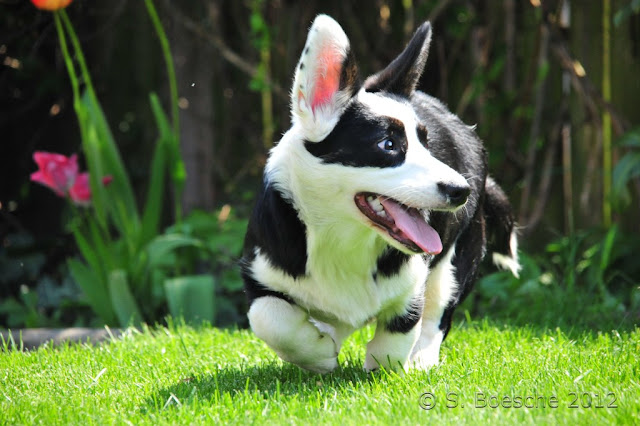 “This
little girl has not only a funny name but also a funny character. She
loves being chased, especially by other Corgis. Froop has a white ear we call her Mandy ear”. It’s the ear that listens especially for Mandy.” 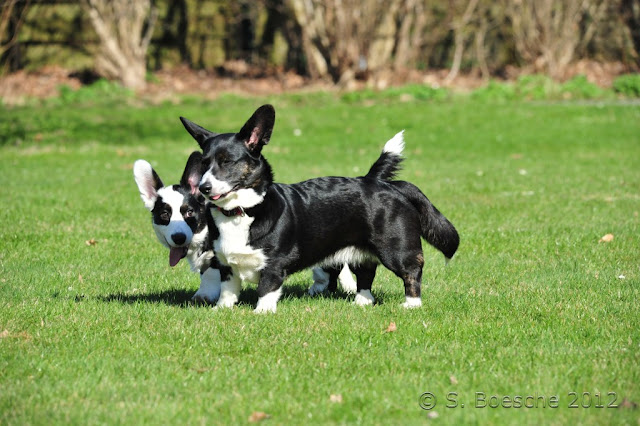 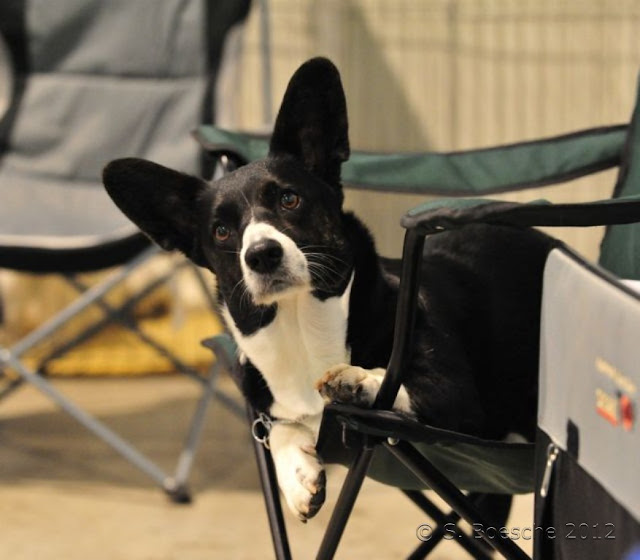 “Luckily Paula, Hazel
and Froop are a harmonic trio. When we wanted to honeymoon at
Euro Disney in April, we didn’t know what to do with Paula. In the end
we were so lucky because she stayed with Hazel
and Froop for the week. This was the first time without our low rider!
Strange feeling, but it was a perfect arrangement. We enjoyed
Euro Disney a lot, it is magical and fantastic, but reuniting with our
beloved Corgi was outstanding, too.” 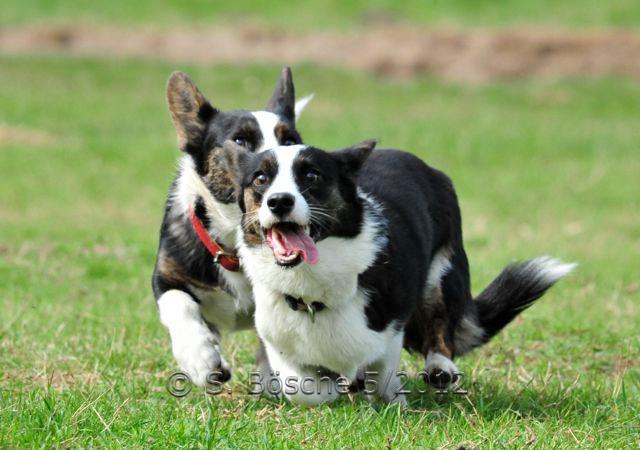 “Life without Corgis is possible but not useful. Its the same with friends, two and four legged!”

Ten year old Frankie stakes out his favorite spot on the couch. Flooftastic.   Jasper still looks a lot like a puppy, but he ... END_OF_DOCUMENT_TOKEN_TO_BE_REPLACED