Lisa S. had been waging a campaign since before last Christmas to convince her husband that they needed a Corgi, in spite of their resident German Shepherd, cat, two horses and a flock of backyard chickens and ducks. “I had become enamored of the breed (thank you Pinterest and YouTube) and decided our farm and family would not be complete until we had a Corgi.” 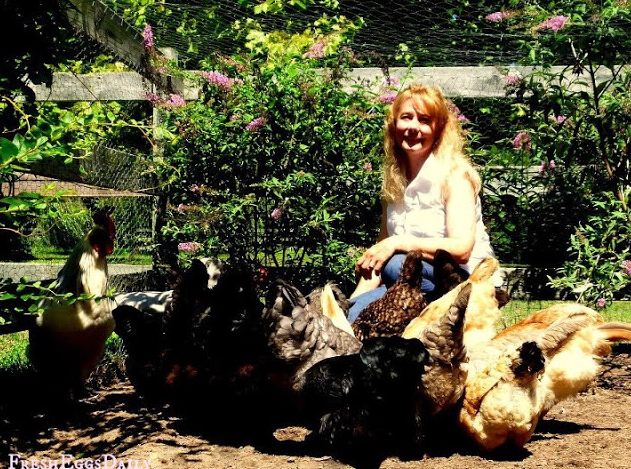 For a peek at how busy and interesting Lisa’s Virginia farm is, visit her delightful Fresh Eggs Daily blog.
“Although I had found a fairly local breeder who might have puppies later in the Spring, my attempts to persuade my husband came no closer to convincing him: treats and an empty basket lined with a soft blanket beneath our Christmas tree, choosing a name (Winston) for our as yet undiscovered Corgi, and sending him scads of cute Corgi pics (is there any other kind?)” 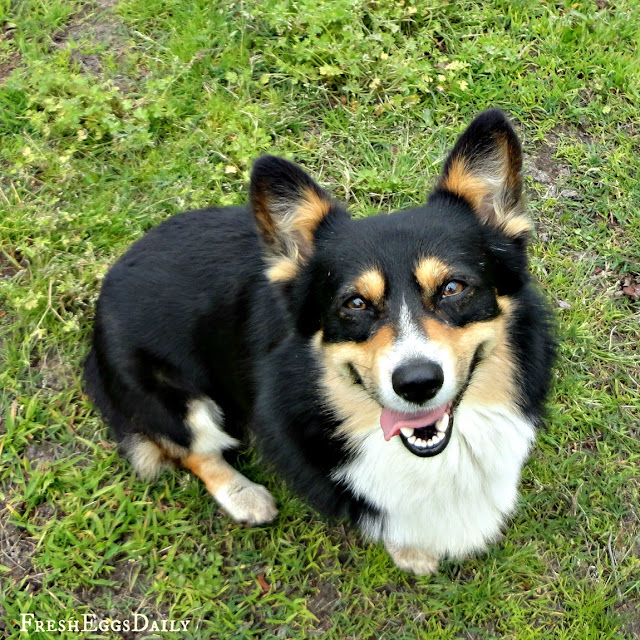 “Then one day fate intervened. A friend who knew about “Campaign Corgi” shared a photo on Facebook of a tri-color Corgi at a rescue organization not an hour away from us. Food Network star and fellow Corgi lover Alton Brown had been tweeting his fans trying to find the Corgi a home. Because I knew the dog was meant to be ours, I filled out the adoption application and returned it right away.” 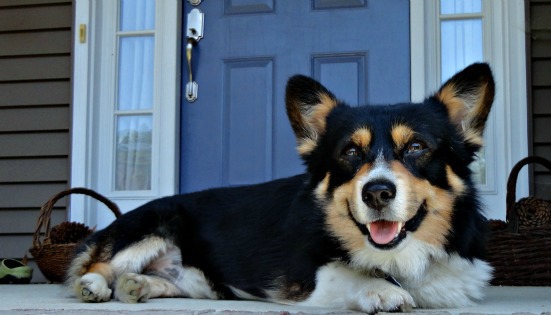 “Not long afterwards I got a phone call. We’d been chosen to adopt this Corgi! Gulp! I realized I had forgotten to ask my husband, but because he was sick with the flu, it was easy to wear him down and get him to agree to the adoption.”
“Winston (formerly Dale) became one of our family. Our vet thinks he’s just over two years old. We know nothing about his background, no idea how or why he ended up being picked up as a stray. We’re just grateful he ended up in our lives.” 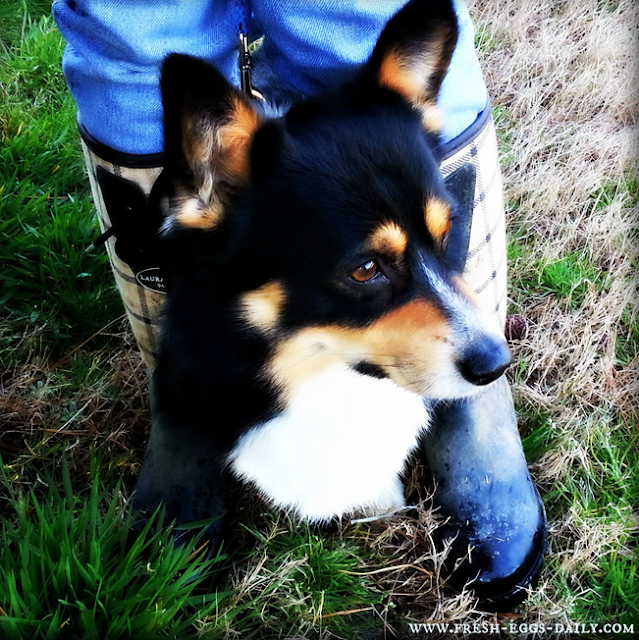 “Despite having sworn up and down that we were “not getting a dog with no legs and no tail”, my husband has fallen head over heels for the little guy. Winston has won us all over.” 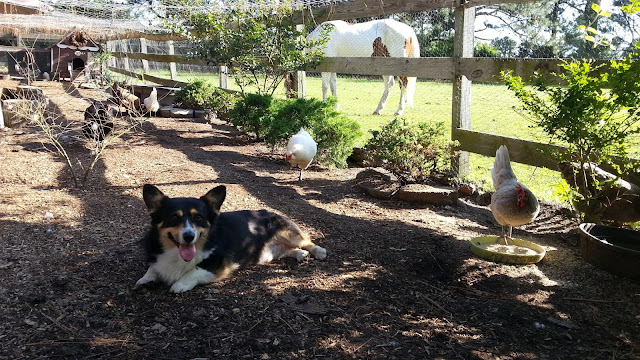 “We’ve only had him since April but he’s come such a long way. Winston was a rescue but acts like he’s been here forever. Always smiling, he wants to be with us doing whatever we are doing. It took a spot of training early on to teach him that chickens and ducks are not to be chased or chewed on and a bit longer for him to realize that our German Shepherd Bella wasn’t a rival for our affection, and there was enough love to go around for both of them. With each passing day, Winston feels more sure of his place in our family.” 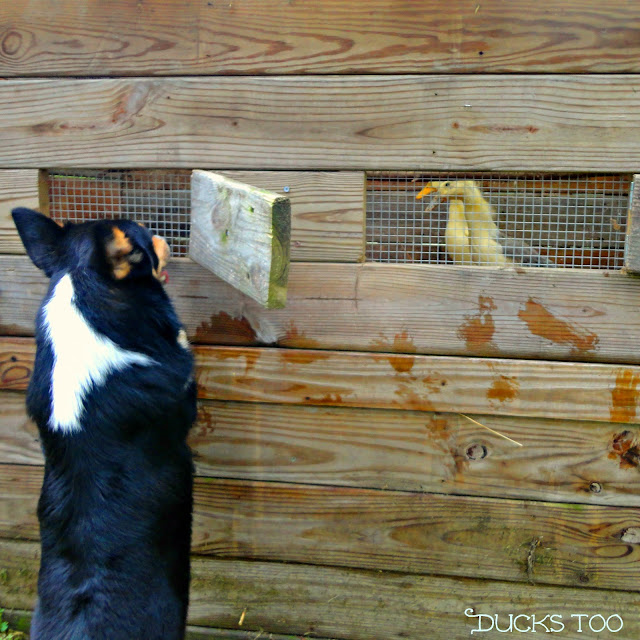 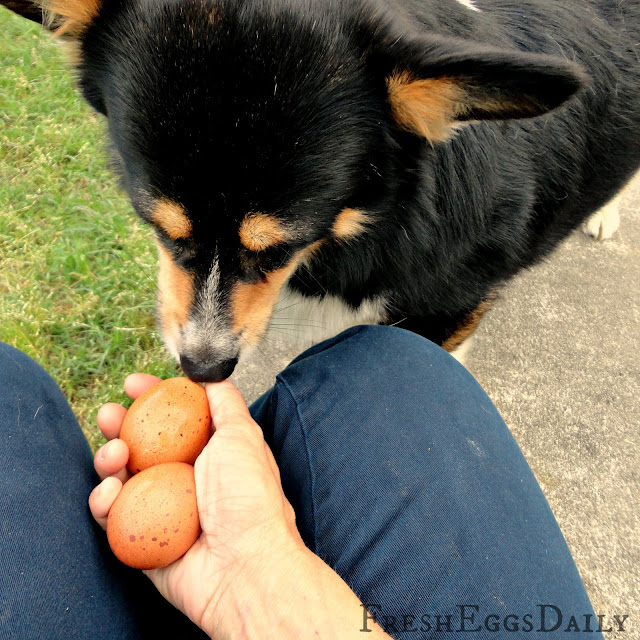 “He gets along great with the chickens and ducks, showing natural curiosity about what they’re doing, and exhibits absolutely no fear around our horses.” 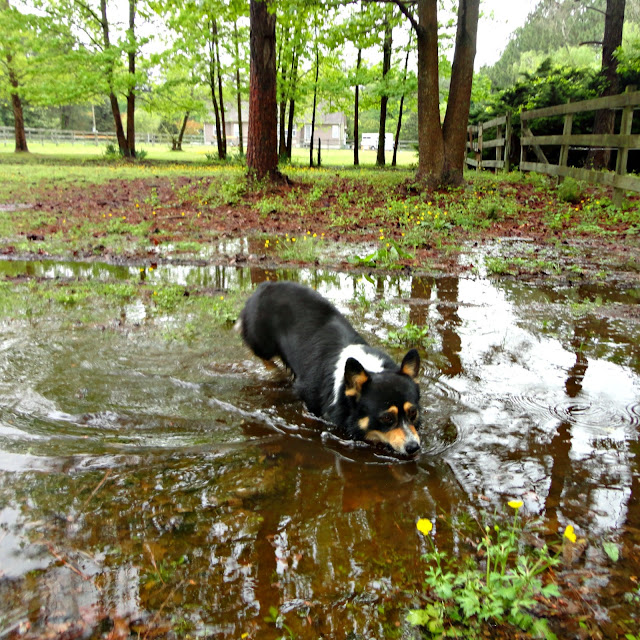 “Brimming with boundless energy, he loves to play with anything and everything. Winston’s favorite game is catch and he always brings the ball back to us. He likes to run around the pasture and chase Bella, then tease her until she chases him. He’s a connoisseur of chewing sticks.” 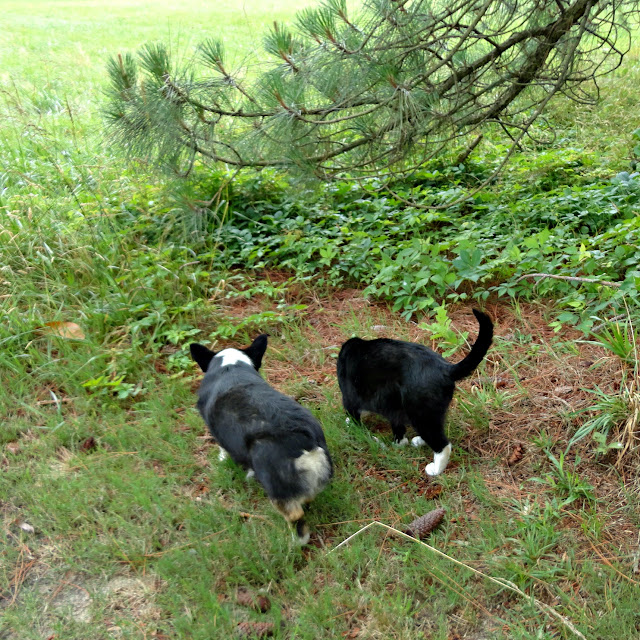 “Winston was clearly was used to cats because he loved ours from the start.”
“He’s not a picky eater and likes his dry dog food just fine, but he relishes fresh scrambled eggs on top and has even learned to carry his own egg back to the house for me to cook for breakfast! For dinner he usually enjoys some cut up steak and rice or chopped meat and vegetables along with his dry food.”
“His favorite treat is sweet potato wrapped in dehydrated duck (sssh, don’t tell our ducks!), but he will eat anything (including packing peanuts and dryer lint) and has never been known to turn down a treat of any kind — including a lick or two of my ice cream at the Dairy Queen drive-thru. His favorite Summer treat is crunchy pears from our tree, where he will until someone picks a pear for him. Winston was surprised a week or so ago with a box of homemade treats and tennis balls from Alton Brown’s two Corgis, Daisy and Sparky. That was exciting for him and Bella, who decided they wanted to donate the tennis balls to the rescue organization that arranged Winston’s release from the animal shelter.” 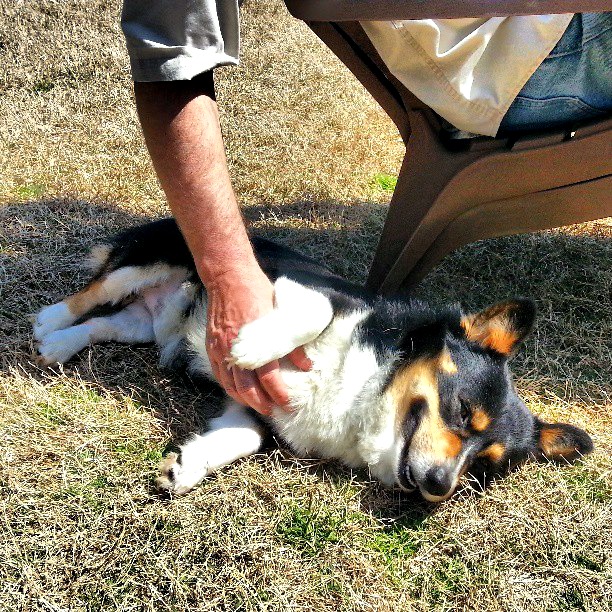 “Although Winston has a nice crate of his own, decked out with a soft quilt and filled with stuffed toys, somehow he has managed to circumvent my husband’s long-standing “no dogs in the bed” rule and sleeps in our bed, cuddling his favorite stuffed hedgehog toy.”
“Winston has a little kiddie pool for the Summer. He enjoys helping me fill it with the hose, but as soon as it’s full, he hops out and just uses it as a giant water bowl. He adores water and one of his favorite pastimes is helping with barn chores, where he delights in being sprayed with the hose while we’re filling water buckets.” 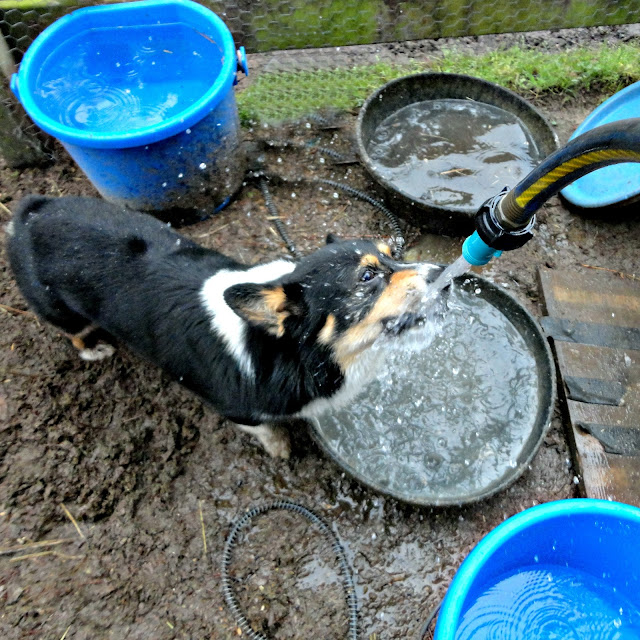 “Winston has turned into quite the farm dog; ours truly was a match made in heaven. The rescue organization later told me they chose us out of nearly 150 applicants because “we lived on a farm — and Corgis belong on farms.”

Well, Winston sure does!

Ten year old Frankie stakes out his favorite spot on the couch. Flooftastic.   Jasper still looks a lot like a puppy, but he ... END_OF_DOCUMENT_TOKEN_TO_BE_REPLACED