From the minute she saw him, Megan K. knew that Jasper was hers. How could she know then that he was destined to be her soul dog? (Because he was). 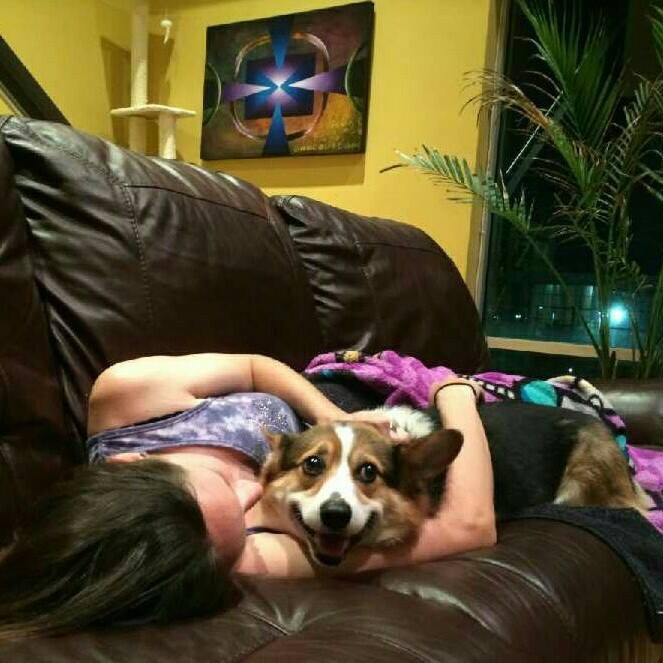 “This much cuteness should be illegal.” (Indeed). 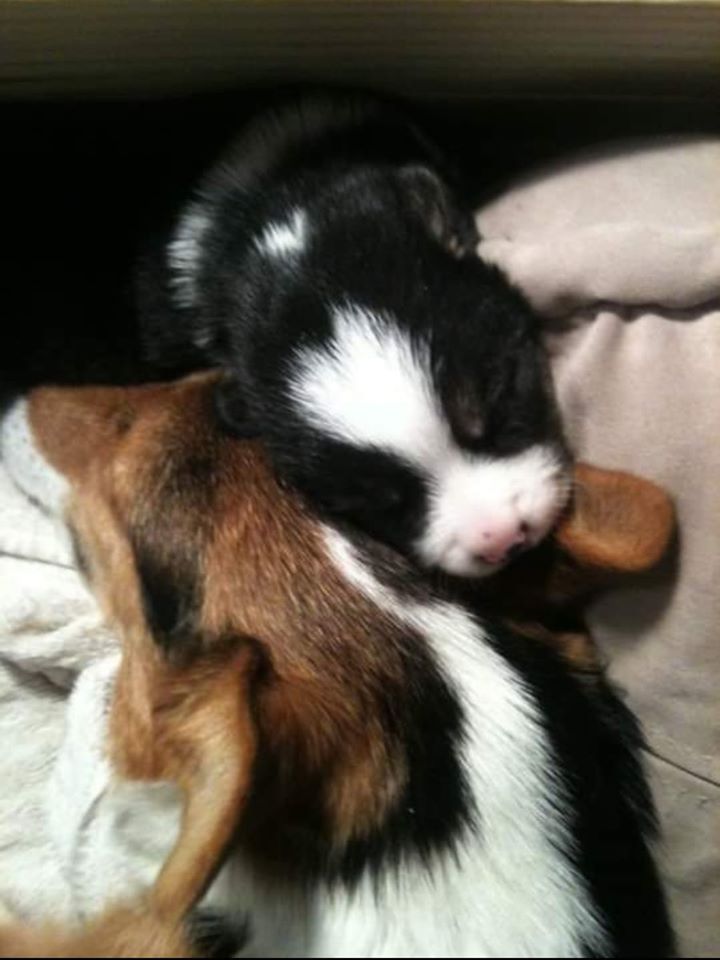 “I loved him from that very first moment as just a tiny little thing.” 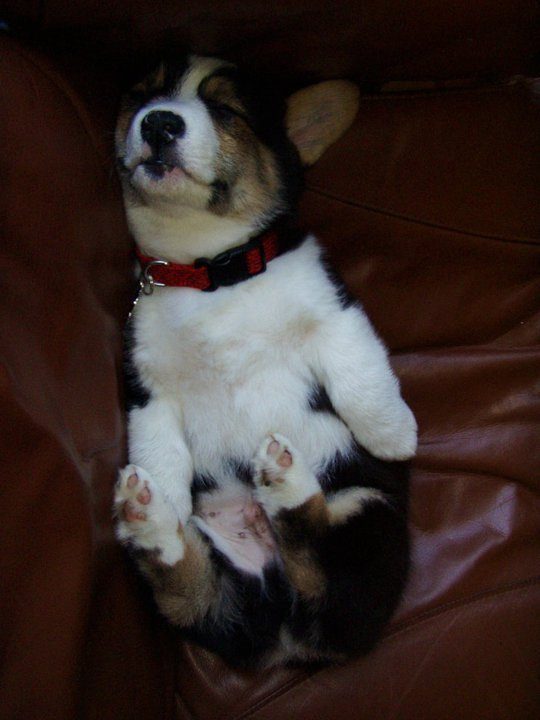 Jasper was an early master of the derp face. You might even say he was a natural. (Bonus BABY TOE BEANS!) 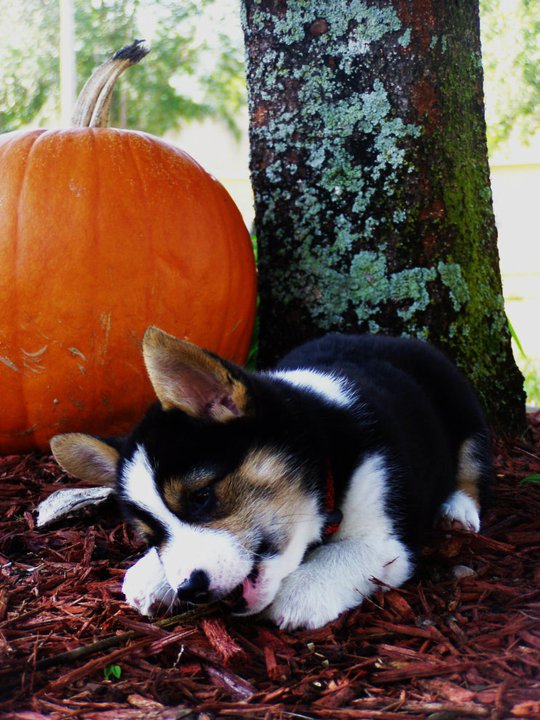 From early days, this scamp was her shadow.

“Even when I broke the vacuum out (2 – 3 times a week) he was still right beside me, making sure that vacuum would not turn and attack me.” 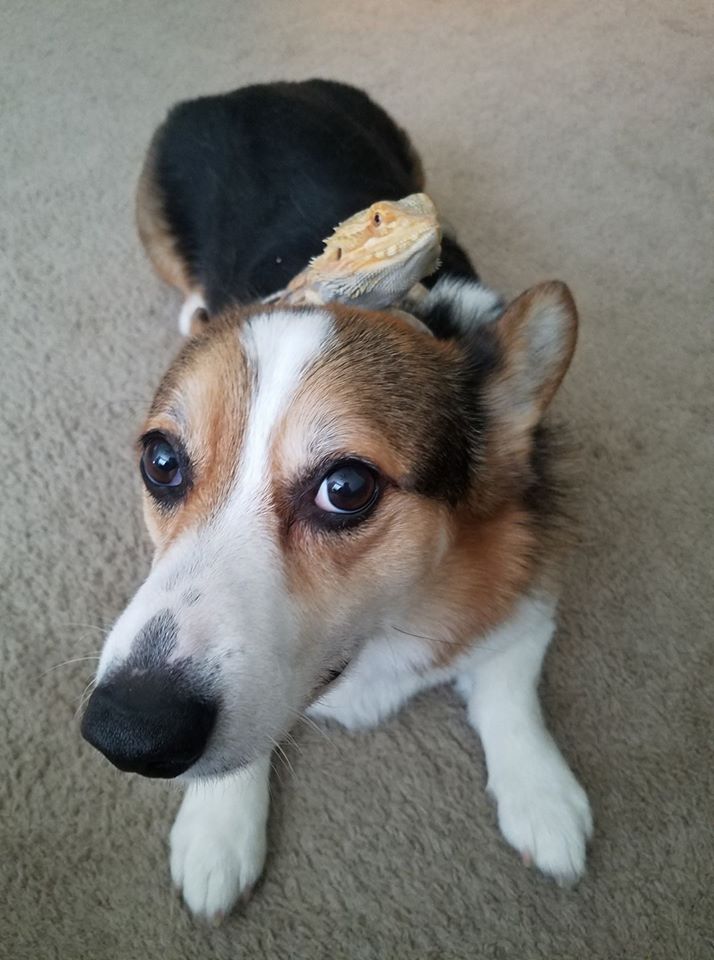 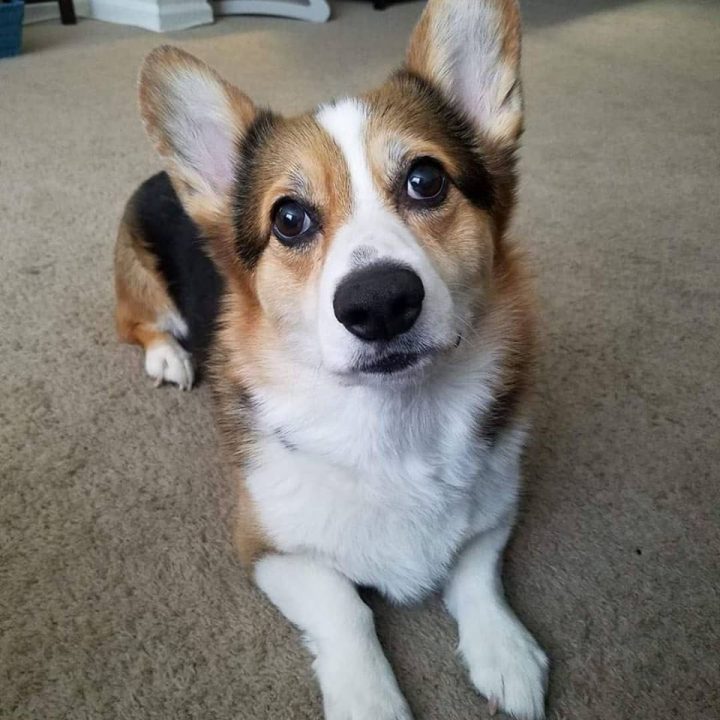 “Jasper loved to “get the kitty”. When my parents cats would start to get into a growling match, he would look at me with those lovely eyes patiently waiting for the words. Pleading for them. At the signal, he would run into the middle barking and telling them to knock it off.” 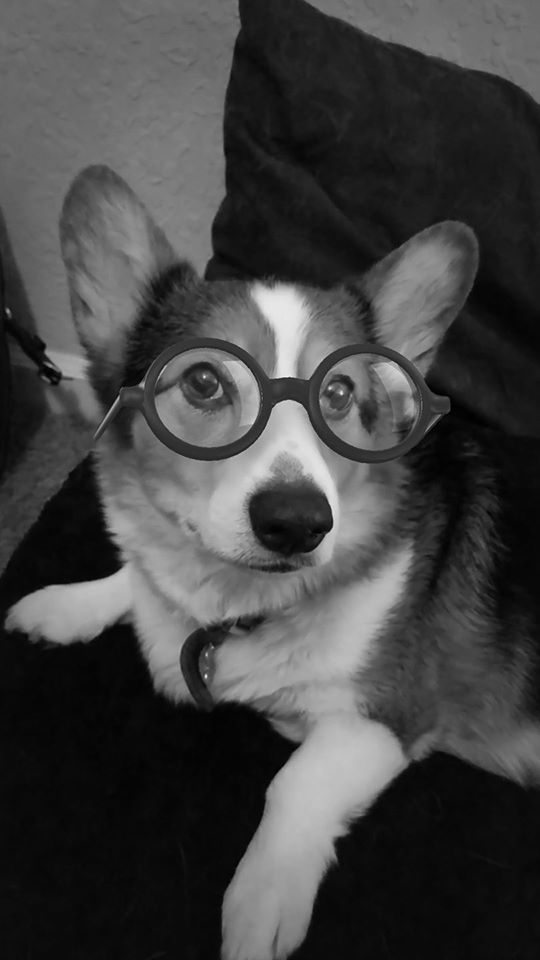 “He thought everyone was his friend except other dogs. Jasper did not trust their motives.” 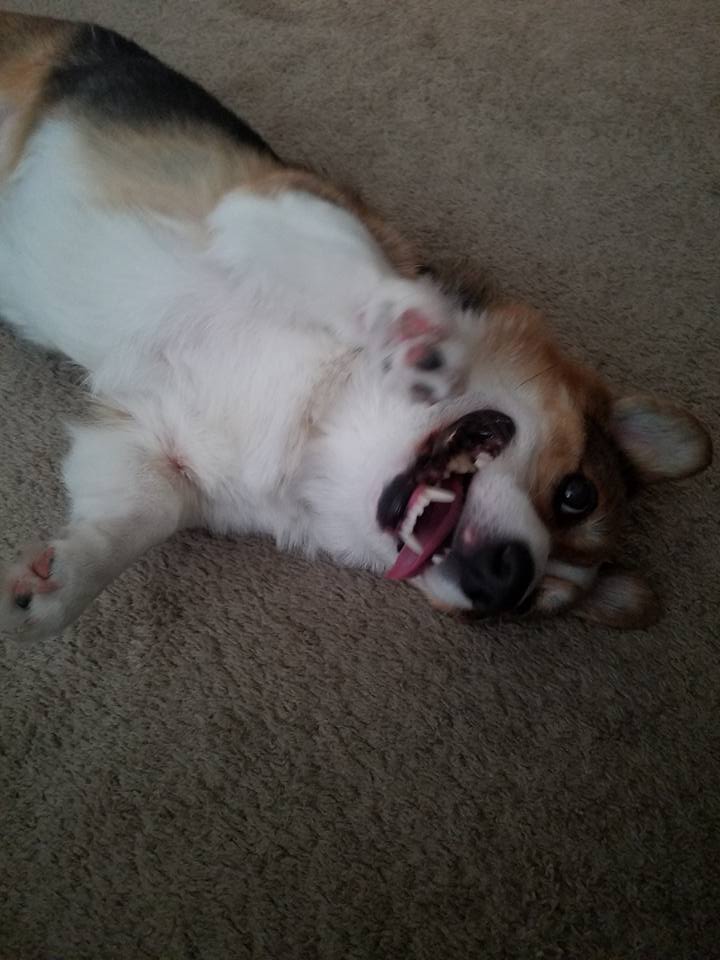 “He loved to play fetch. I would go and go until he couldn’t anymore. I knew he was done when it would lay down. We’d do one last throw and call it a night.” 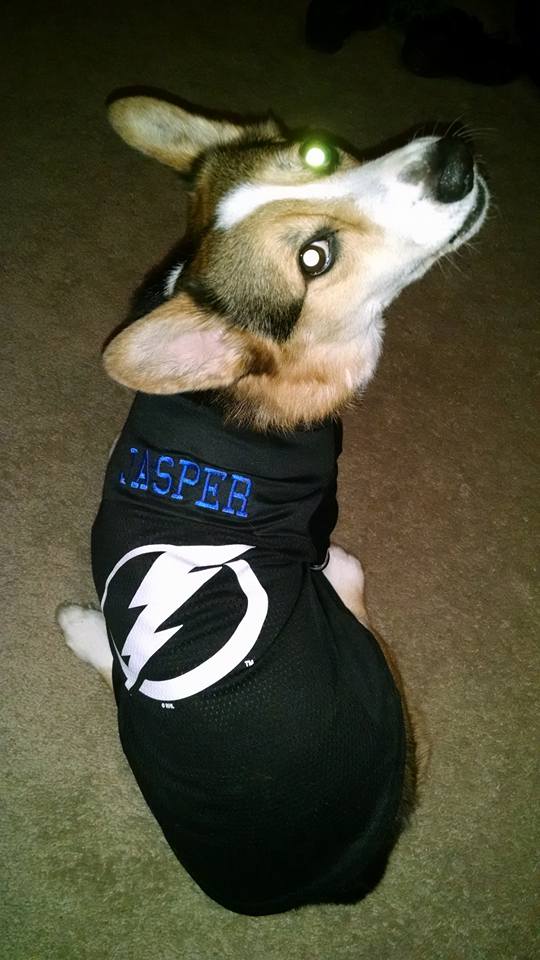 “Everyone loved Jasper and thought he was the most handsome and sweetest boy around.” (Go Tampa Bay!)

Although he earned his wings in July of this year, this bundle of love, good looks and occasional Corgitude left a lifetime impression on his family’s heart. And thankfully, he KNEW when the camera was on him.” 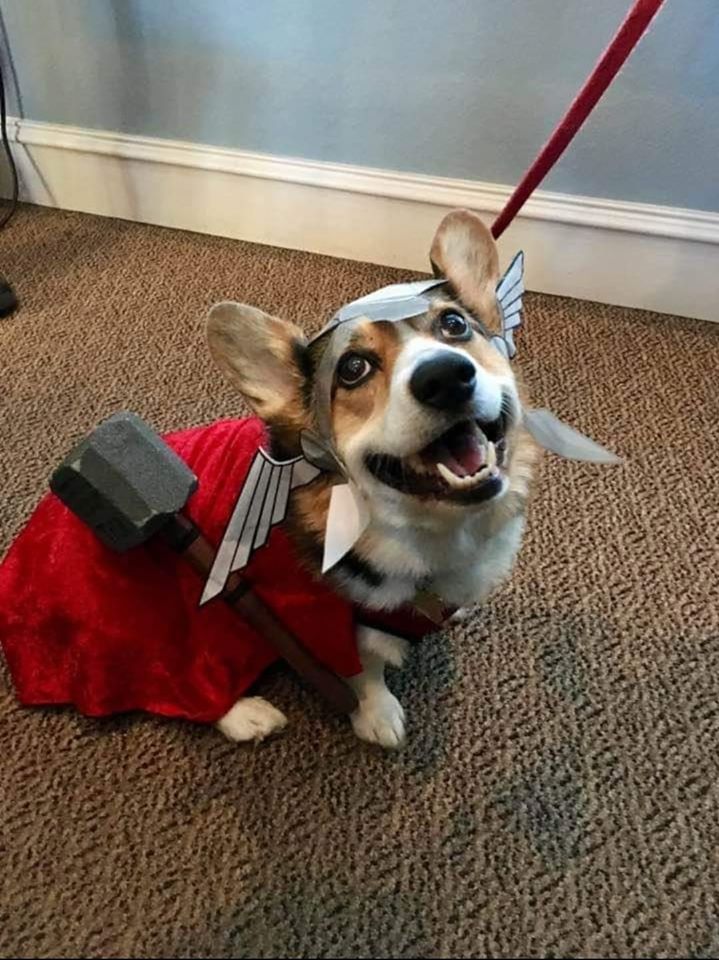 “At a Halloween costume contest, he came in second place (judge’s choice) and beat out 60 other dogs. I made his Thor hammer and cape. The hammer remains on display.” 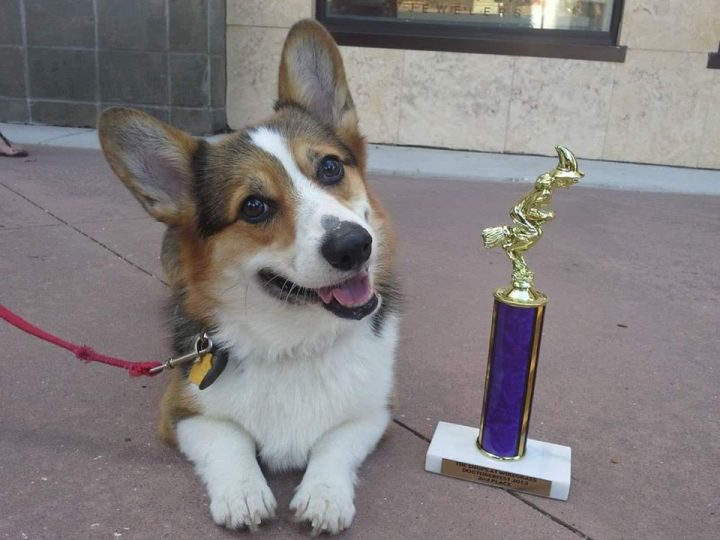 Like all Corgis, Jasper had his own quirks and eccentricities. “He loved to chew antlers to the nub and would kill a squeaker in 30 seconds. He had many beloved toys, but his favorite was an orange kong ball. If it was raining or too hot (every summer day in Florida) we would play fetch inside. He liked to roll the ball into a place he couldn’t get to, under the couch or under a table. He just wanted me to get it and be on his level.

“He didn’t like his toes touched by anyone except me. I always said he got that part from me because I have a serious foot phobia!”

“Jasper was a protector. He didn’t like to sleep with me because it was too hot for him, but he always slept under the bed below me so he was still as close. Even though he had two beds of his own. If I put him on my bed, he lasted for maybe 10 minutes before leaving.” 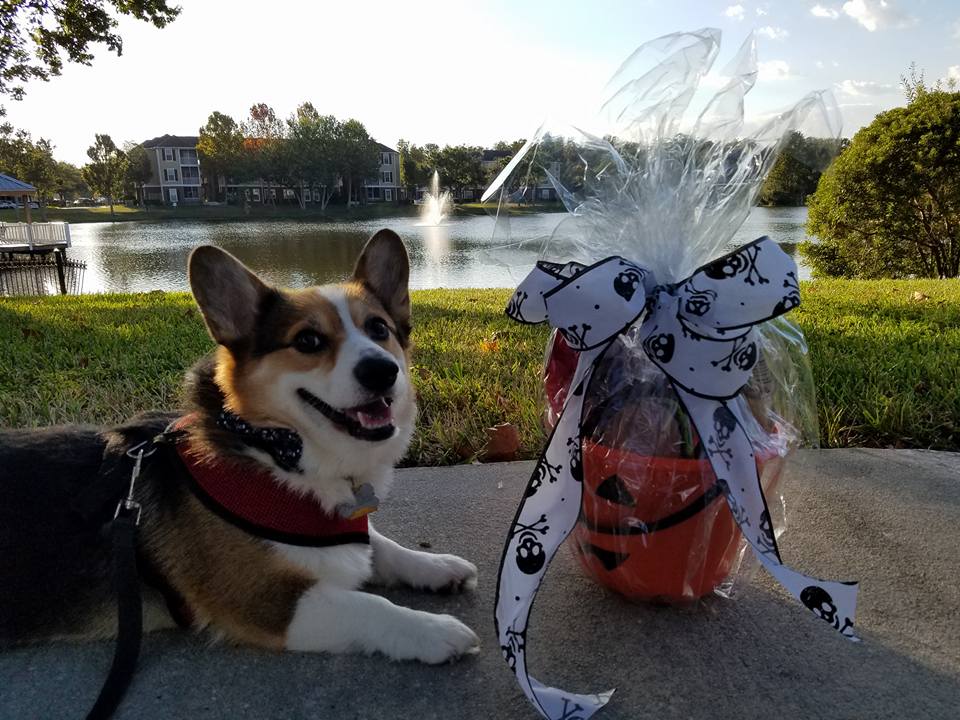 “He enjoyed car rides to his grandparents house where he would spend the night. It was an agreement when I moved out. They loved Jasper so much and his passing still hurts them just as much.”

“I know nothing will ever compare to him, but I am open to the day when I decide the time has come to welcome a new little one.”

Until you meet again.

Ten year old Frankie stakes out his favorite spot on the couch. Flooftastic.   Jasper still looks a lot like a puppy, but he ... END_OF_DOCUMENT_TOKEN_TO_BE_REPLACED