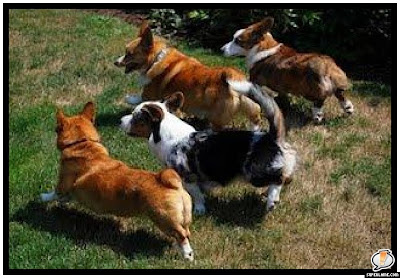 In descending order of age …
Six year-old Piper is a rescue. Although she came from a working cattle ranch in Montana, this girl’s idea of herding a cow is a patty with special sauce. She’s for the chompin’, not the rompin’. 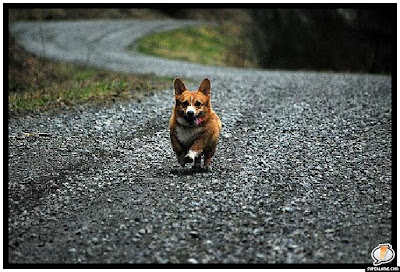 Piper’s got a thing for barking at falling leaves and squirrels, both of whom ignore her. She adores little girls and pretty clothes and kissin’ and huggin’ and is always ready for a dress-up, making her the ideal salesgirl for the doggie clothing in her folks’ pet supply store. She’s also an enthusiastic frapper. 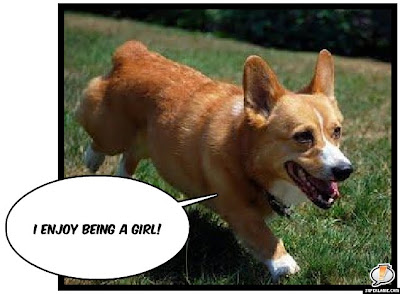 Four year-old Riley was a puppy mill rescue. With heaping helpings of TLC and patience, he has matured from an ill-tempered, biting young’un to a true Southern gentleman, though he retains a dry and sometimes curmudgeonly sense of humor. He has a real dislike of mud, rain and dirt and lives for his baths and brushings. This candy-craving Pem loves to work and is Mom’s best shop hand, “patient and tolerant with children, dogs and huggy people who want to pick him up and cuddle him.” Riley hopes to work the register someday, and since he’s a Corgi … who knows? I, for one, put nothing past them. 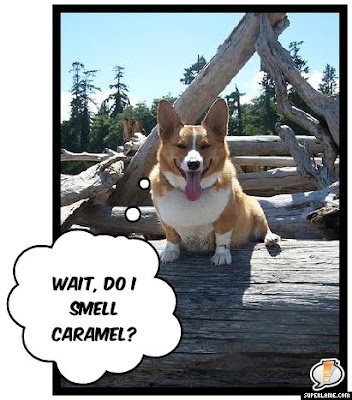 At play with Simon and the Wubba: 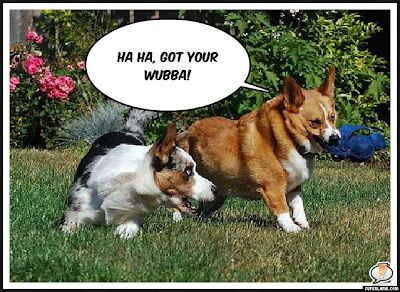 Exuberant and social Simon is a one year-old Blue Merle Cardi who goes at everything with great gusto. According to Mom, he’s been “happy go lucky since he was a puppy, good natured and smiling, never has a bad or an off day and always greets the world with a grin.” Simon is all boy, loves to play ball, hike, run and leap logs, herd (chickens too!), explore the woods, get good and filthy, and swim like a duck while barking his fool head off non-stop. 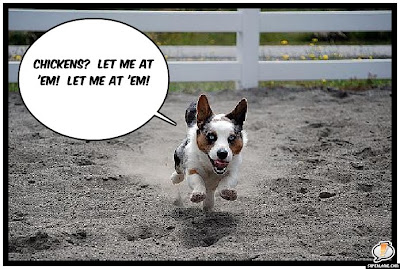 Simon adores the city and fancies himself Dog About Town on trips to nearby Seattle, where he retains an uncanny accuracy for sniffing out Starbucks. As if on cue, he’ll pester Mom and Dad ’til they go in and buy something to share with him. He loves crowds, attention, cameras and public places. Simon’s favorite toy is his Wubba, which he “screams at until it doesn’t throw himself at him in the yard.” His best pals are Caleb and Dusty the cat. 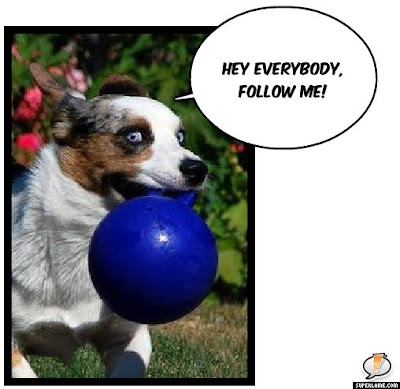 Sharing with Caleb? Not so much … 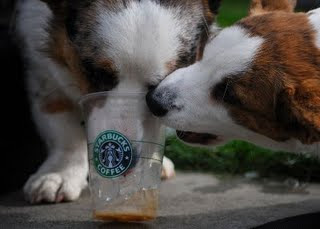 Seven month-old brindle Cardi Caleb has model looks and major attitude, “strutting his tail on the dogwalk” everyday. Behind that innocent face lurks a toothy appetite for destruction, earning him the nicknames “Sharkdog”, “The Stripey Terrorist” and “Chompy”. 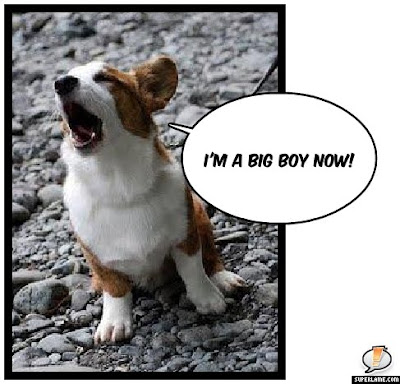 He routinely works his puppyish charm on strangers for belly rubs, none of whom believe that underneath that angelic exterior lies the heart of a pistol. Caleb loves to race headlong into the fishpond but detests the baths which follow, preferring instead to retain his hard-earned “Eau de Goldfish” allure. 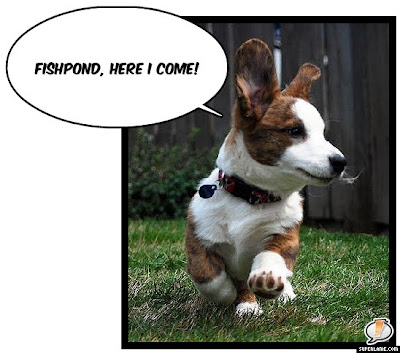 As if there weren’t proof enough already of Caleb’s intelligence, he has a healthy respect for all things feline and loves him some kitties. Dusty’s got him in a full-on headlock, here. 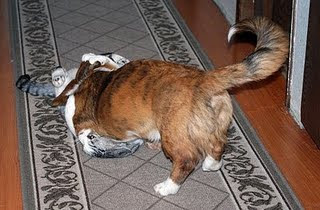 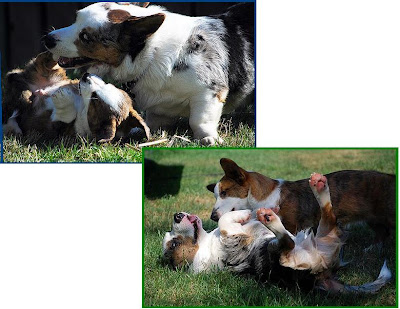 * * * *You can follow the further adventures of Piper, Riley, Simon and Caleb at their blog: www.wagginthedog.blogspot.comAnd there are plenty more beautiful pictures at Mom’s flickr page.Thanks, guys!* * * *
CORGIS SEMPER FI!

Ten year old Frankie stakes out his favorite spot on the couch. Flooftastic.   Jasper still looks a lot like a puppy, but he ... END_OF_DOCUMENT_TOKEN_TO_BE_REPLACED