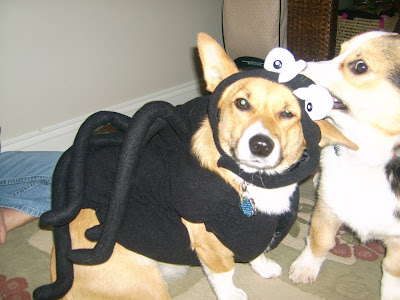 Their Mom Melissa says Gem is a family princess who enjoys dressing up to get attention. This sable girl turned a year-old on October 4th, loves visits from Grandma and Grandpa, treats of all kinds, swimming, going to the lake, long walks, snow, squirrels and sleeping in with the family on the weekends! 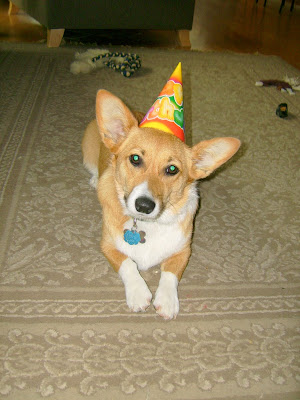 She’s as clever as she is cute, having mastered sit, dancing, laying down, shaking hands, staying, playing hide and seek, and peek-a-boo. She’s working on roll over as well! 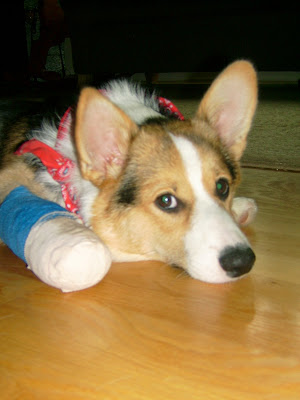 Six month-old Edward is the wild child/family clown. Unlike Gemima, he doesn’t like getting dressed up. “It was like trimming his nails!” says Melissa. He’s an 8 month old-Tri who delights in playing with Gem, competing for all the attention alongside her, visiting company — especially Grandpa and Grandma!, going to the lake, swimming, long walks, snow, squirrels, stealing socks, good rawhide chews. He’s mastered a few tricks already, including sit, shake, dance, hide and seek, peek-a-boo, pat-a-cake, and is working on stay. Edward is very in tune to his people. Here he is sporting a temporary cast and the big puppy eyes.
* * * * *

Three cheers for Gemima and Edward! Love and biskies to you guys.

Ten year old Frankie stakes out his favorite spot on the couch. Flooftastic.   Jasper still looks a lot like a puppy, but he ... END_OF_DOCUMENT_TOKEN_TO_BE_REPLACED