Holly McC. lives in rural Grandview, Texas with her four Corgis Shasta, Razor, and Smurf.  A fourth Pem, Bullitt, grew up on the farm and has since gone to a new home where he’s got an awesome sauce’um life. 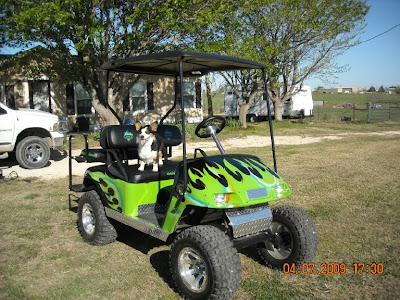 Her first Pem, Smith’s Shasta, joined the family as a pup in 2005.  In this photo, Shasta is guarding “her” golf cart and getting ready to go for a ride.  “She’s my go everywhere dog” writes Holly, “and loves to ride in the truck — the longer the trip the better! Shasta adores motorcycle rallies, where she is always the ONLY Corgi there, especially since all the people came to see her!” 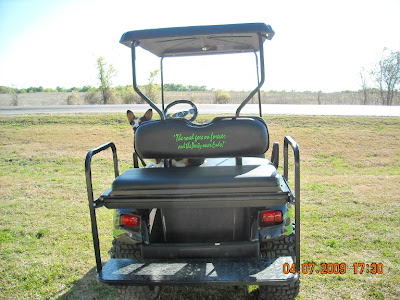 “Shasta’s favorite place to sleep — besides in the bed — is under it. She’s never met a toy she didn’t like, and in typical Corgi fashion is a beggar who’ll eat anything.  She’s quite the helper when horses are being bathed, running around them without a moment’s hesitation. Mine are all used to it but when she goes to the vet’s house to stay, she entertains everyone, especially the thoroughbred race colts who aren’t used to being bathed by a live sponge! Shasta will tear up any water hose left on the ground.”
“The other Corgis are all littermates from two separate litters out of Shasta and the same male, Blue.  The cross has cross has twice resulted in nice uniform litter of puppies.  Like Shasta, they ALL love water.”
“Razor is a male out of the first litter, and along with his brother Smurf is quite the hunter and helper. Both herd everything from cats to horses to people.” 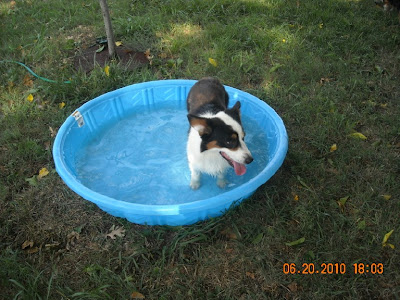 “He’ll turn two this month. Razor is probably the most happy go lucky dog I’ve ever had!  Everyone said he had too much white, but to me it’s no matter:  he is very sweet and loveable.” 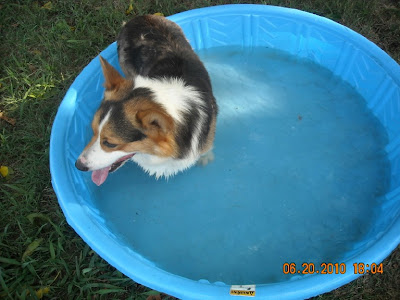 “Smurf was the cutest puppy out of the litter.  While Razor had rather be off in the pasture running around, Smurf is a lover and likes nothing better than to be in your lap.  He is my big baby.”
“When he was five months old, Smurf had a bad run-in with one of the horses.  I was home waiting for an overdue mare to foal. I always turn he and Razor out to run when I’m feeding and they make the rounds checking on the cats and horses. I was gathering feed when I heard this horrible yelp — my roan horse had pawed him in the hind leg! So off to the emergency vet we went, because I couldn’t get in touch with my regular vet. What an awful experience, listening to him cry while they were trying to X-ray him!  His left femur was broken in three places, two of which the emergency vet missed.  My regular vet found them the next day.”
“We decided to treat it the old fashioned way with plaster casts. Well let me tell you, Smurf could get it off faster than we could replace it with a new one! She finally kept him for one solid week and put the heavy cast on for six days before artfully removing it. At that point we decided to let nature do the rest. Happy to say it’s been over a year now and you’d never know Smurf ever had anything happen to him. That’s the good thing about young dogs, they heal quickly.” 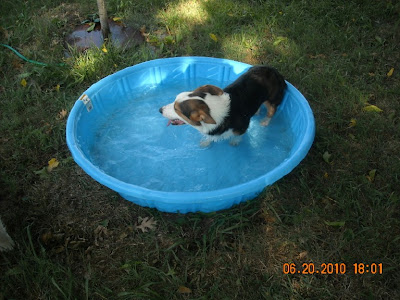 “Red-headed Bullitt is the beautiful male who became a house dog, much to Shasta’s chagrin. Before he found his forever home with a college boy who loves him dearly, he was lap dog number one.  If I was in a chair, Bullitt was in my lap! He played with all Shasta’s toys and stole her food, and she didn’t much like it! There is nothing he won’t eat, but his favorites are broccoli and carrots. Bullitt was a very special puppy who never met a stranger!” 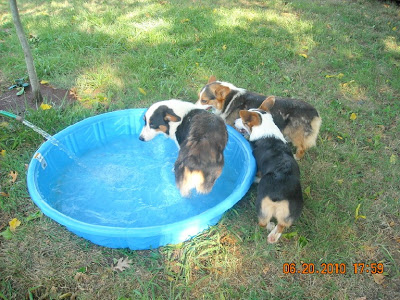 “My Corgis are special and I love them all! They are as similar as they are unique and I enjoy them more than any dogs I have ever owned. They are brave, loyal, protective and the biggest beggars in the world.  It’s hard to resist those eyes wanting a snack!”

That is some SERIOUS Corgi Power you’re working down there in Texas!

Ten year old Frankie stakes out his favorite spot on the couch. Flooftastic.   Jasper still looks a lot like a puppy, but he ... END_OF_DOCUMENT_TOKEN_TO_BE_REPLACED