Thirteen year-old Kinser was Cindy Brown’s first Corgi.  Like any senior, he’s seen a few things in his lifetime, including the arrival of two young whippersnapper Corgis in his household.
“In the Fall of 2007 Kinser had to say gooobye to his lifetime friend Maddie. He was lost without her, so I decided that he needed a friend.  Miss Fallyn came into our life that December, with a lot of puppy energy.” 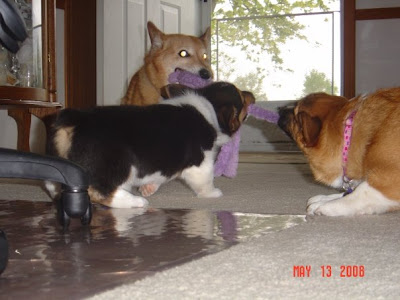 Kinser with the young ‘uns.
“Kinser would look at me like “What were you thinking?” Five months later little Tucker joined the family and we became a three Corgi household. At times Kinser still gives me that look.” 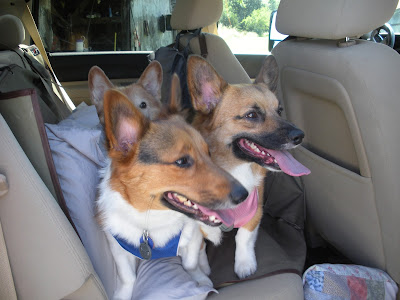 Over the river and through the woods, let’s GOOOOOO!
(Note who’s peeking out from the back seat).
“All three dogs like to go camping.” 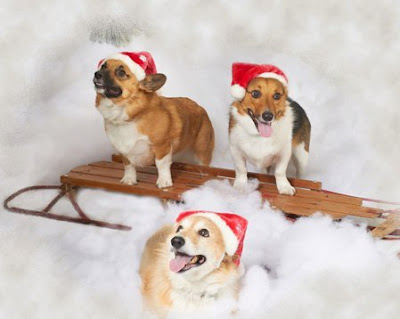 “They get dressed up in lots of costumes.” 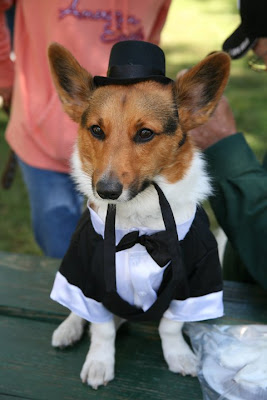 “We participate in our local humane society’s annual Mutt Strut … “ 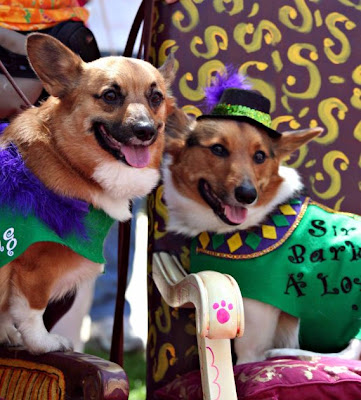 … and this year Fallyn and Tucker were crowned the King and Queen of the PAW PALS Marti Paws parade in Quincy, Illinois!  She was Queen of Everything and he was Sir Barks a Lot.  They got to ride on a float.” 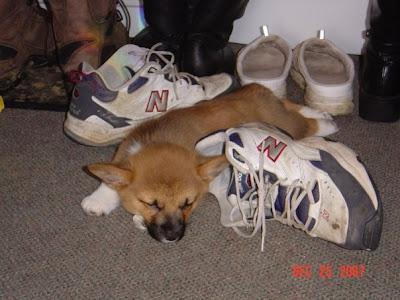 “Fallyn is all girl, we call her Princess Squishy.  She’s a real snuggler.  Fallyn puts up with the boys to a point and is very good with her big brother Kinser. He’s hard of hearing and doesn’t always hear when I call him, so Fallyn will go and run by him and bark to get his attention saying “Mom wants you.” She loves to get Tucker to chase her around the coffee table.”
“Her favorite place to lie is under my recliner. Fallyn is all about shaking her toys into submission, and her favorite is the Kong rabbit. When Tucker is chasing her she’ll run by and pick up a toy to carry with her. Fallyn is also very good at getting stuff way from her little brother. I’ve watched her bring another toy up to him to lure him away from what he had, so she can casually walk by and pick it up.” 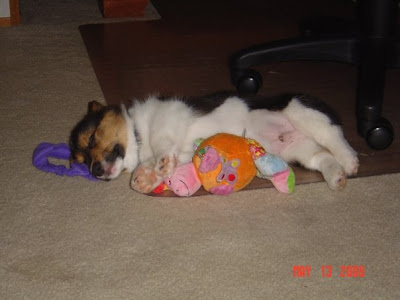 “Tucker is a people person dog all the way. He wants to be in whatever room you are in, especially if that room is the kitchen. He wishes he had longer legs so that he could get at that food on the counter. Not a bag comes into the house that he doesn’t inspect. Tucker has his CGC, loves to go to the Kennel Club for lessons with all the other dogs, and has competed at obedience trials.  At his first match he received the highest score!”
“He loves peanut butter, so much in fact that his Grandpa was feeding him some PB off of a little spatula when he grabbed it and swallowed the end. It was removed without a mark on it … I have one high dollar spatula!” 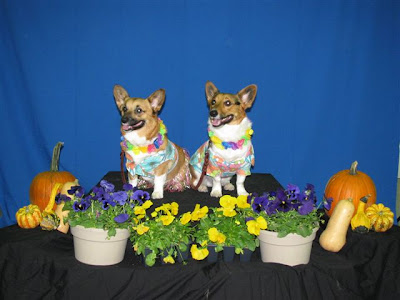 Big cheesy grins?  We got ’em!
“God Sent Me An Angel Disguised In Fur To Remind Me Of Love!”
*  *  *  *  *
Welcome to The Daily Corgi, Kinser, Fallyn and Tucker!
You guys are a Corgi Power triple threat!

Ten year old Frankie stakes out his favorite spot on the couch. Flooftastic.   Jasper still looks a lot like a puppy, but he ... END_OF_DOCUMENT_TOKEN_TO_BE_REPLACED