Sandra S. was in her early 30’s when she met Barley, her very first dog. 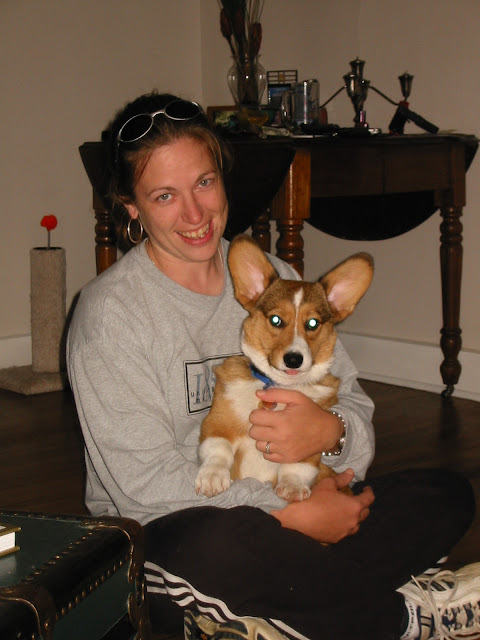 “I got him when he was just five or six weeks old.” 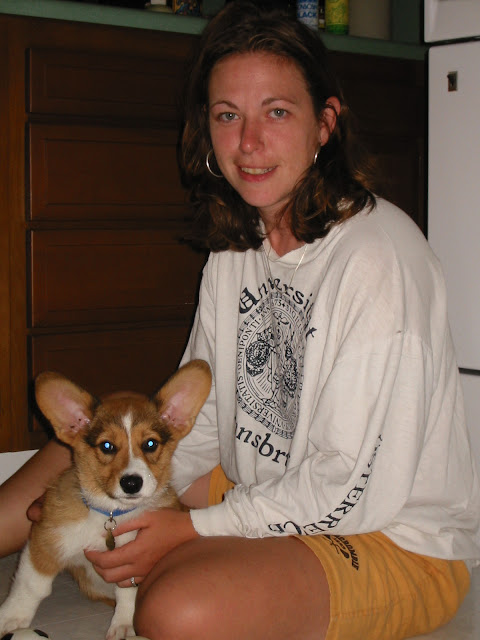 “Juli made sure I was a good doggie mom and taught me the ropes.  She even took Barley to work with her. Thank you Juli, I would never have gotten Barley if it wasn’t for you.” 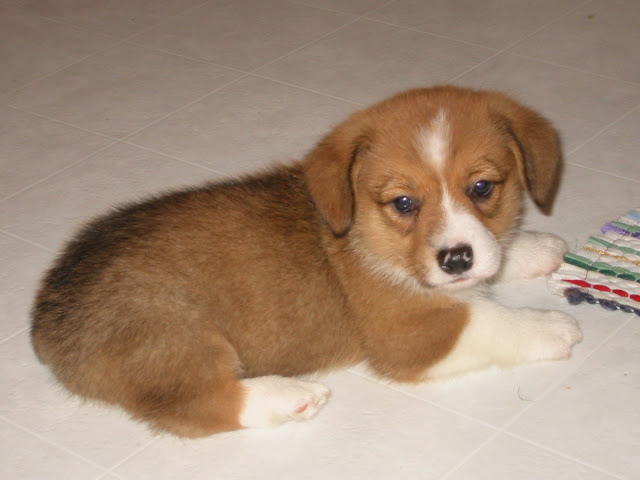 “Barley had the best puppy years any boy could ask for.” 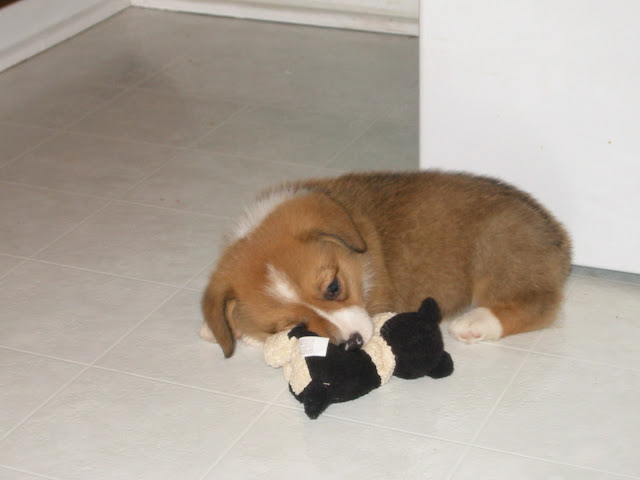 “Mine!”
“From the start, Barley had tons of toys, which he liked to herd.” 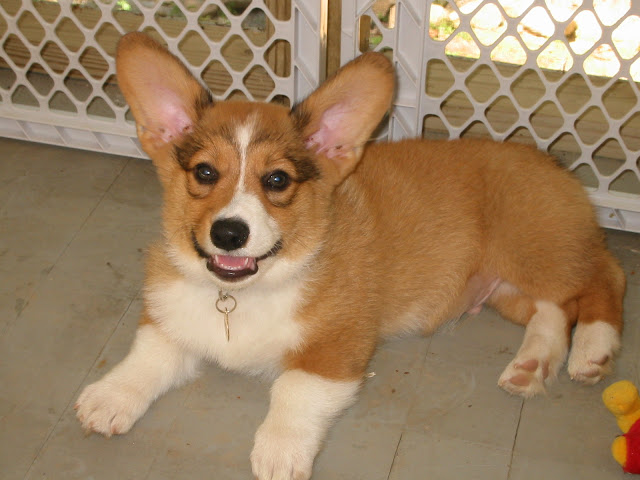 “He had the biggest personality of any Corgi I’ve ever known.  He was a ham, an adventurer and fearless … but he never did grow into those ears.” 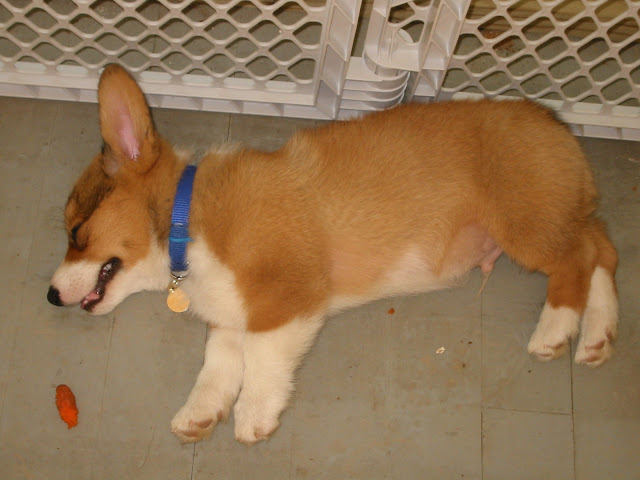 (Puppy dreams!)
“Barley was larger than the average Corgi.” 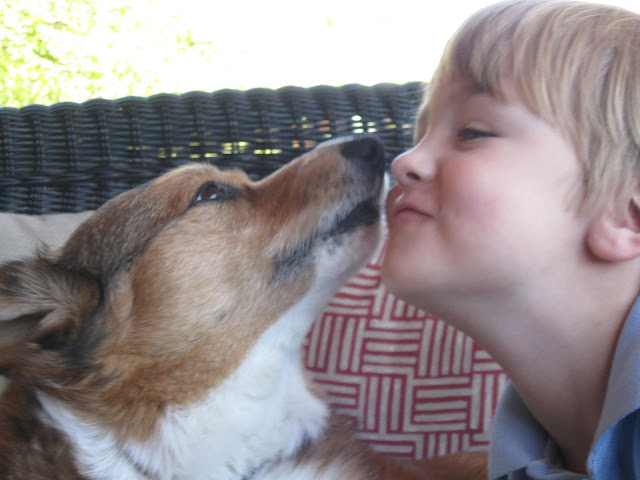 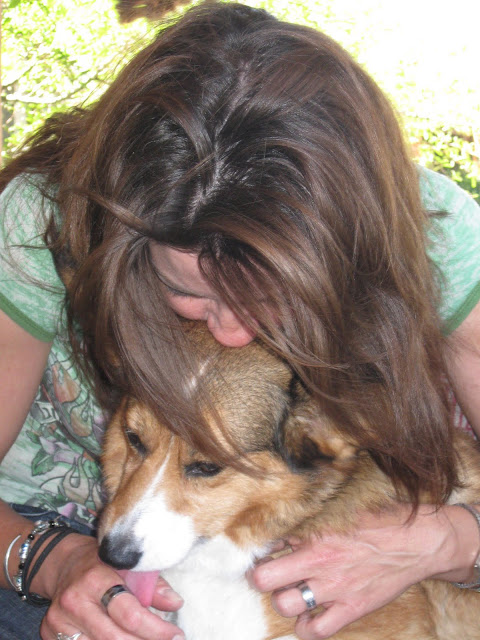 “Sometimes I’d lose him in the sea of kids at the park.  One kid would ask to pet him and next thing I know he’d be swallowed by a sea of little people and he’d just smile and lick their faces.” 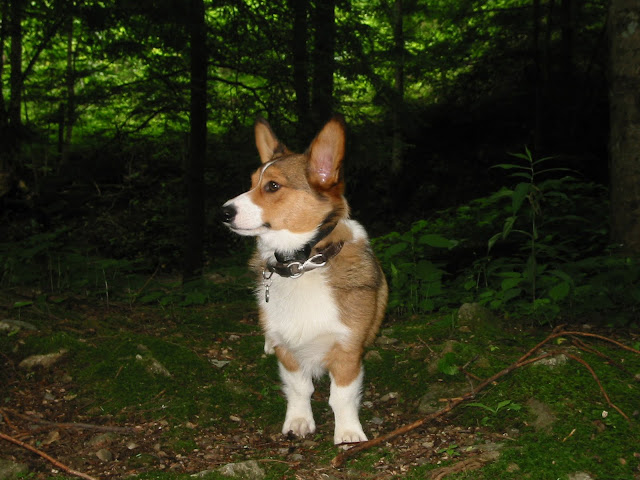 “Never fear, Barley’s here!”
“Barley would drop me like a hot potato at the park for a crying child and stay with them until they stopped crying.” 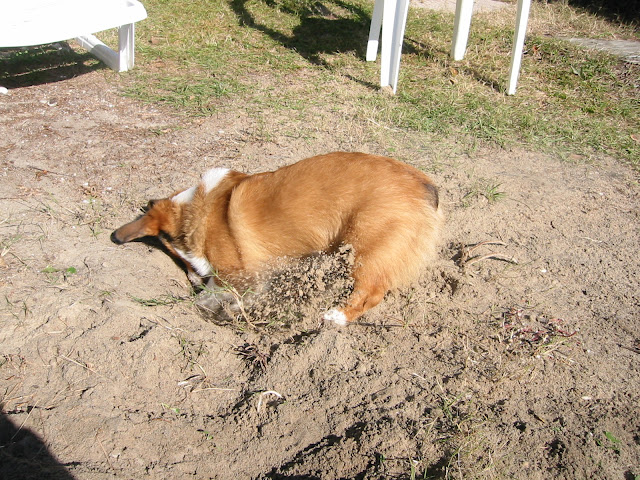 “He had a big fenced yard to do laps and smell flowers, and his own sandbox for digging. Barley was my little helper, no matter what the project.  He loved to help me work in the yard, doing just about anything.” 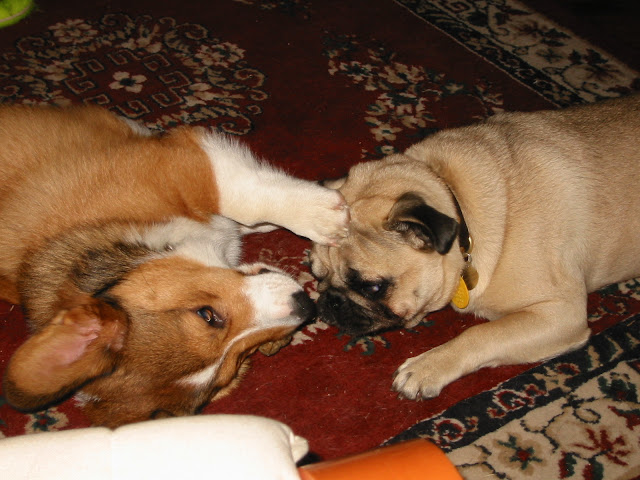 With Spanky.
“Barley had lots of friends and they’d come over to play.” 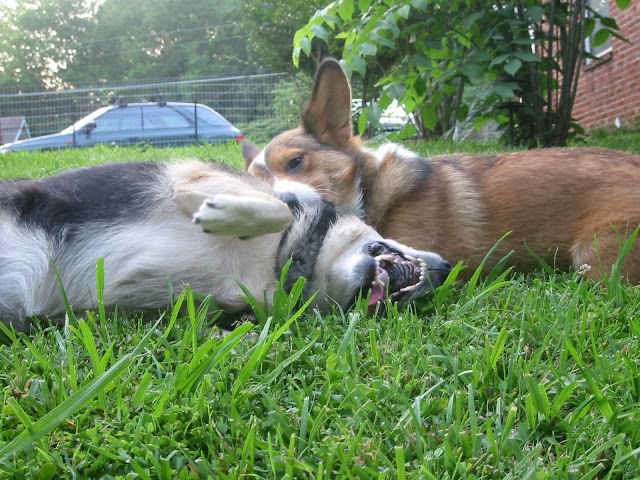 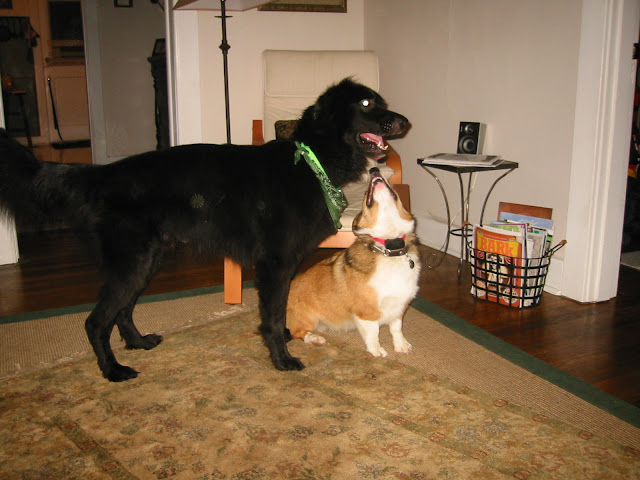 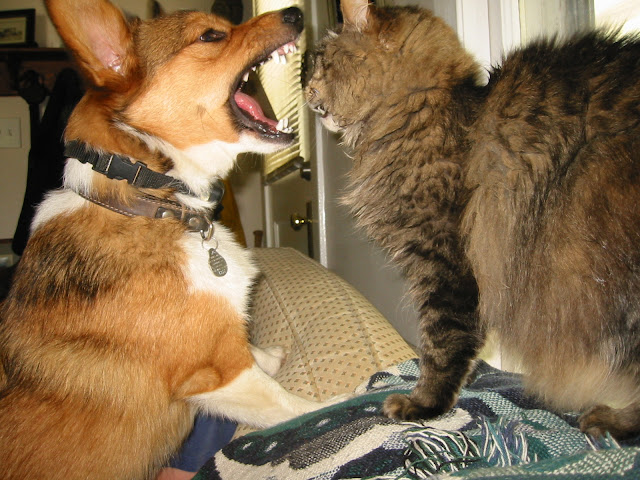 With Salem!
“He got to go to the river on weekends and run wild with lots of other dogs and play in the mud, roll on dead fish and turtles. (Ewww — dogs can be so gross).” 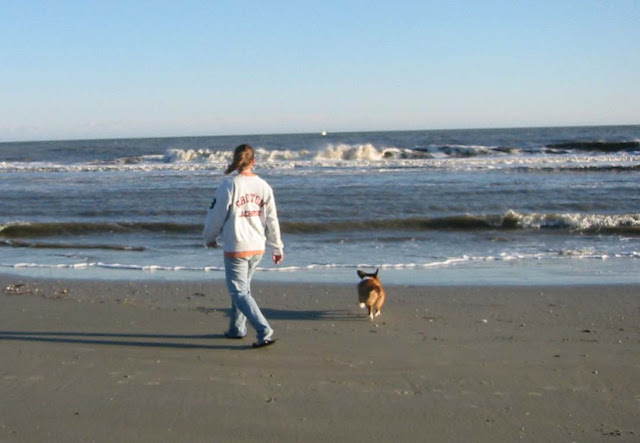 “During our week at Folly Beach, Barley loved chasing the froth on the surf and all the birds too!” 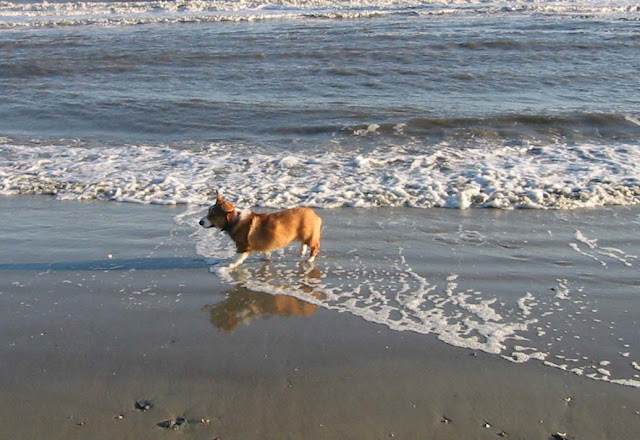 “We walked the beach for hours together.”
“He got to meet some of my Aunt’s horses up close.  One of the horses leaned down to give him a sniff, so Bar got to have his nose inside a big horsey nostril.” 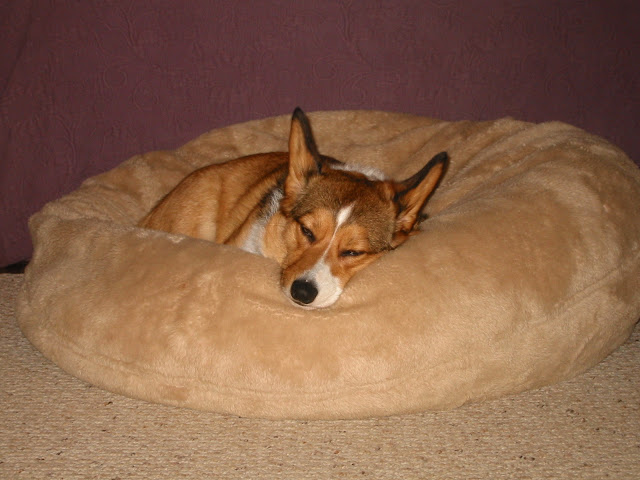 “When I was working on my Master’s, sometimes Barley would get to spend the day being the morale booster for my fellow grad students. I’d let him run the hall to see who was in their office early in the morning. He made everyone smile and he didn’t even bark when I was in class and my office mates watched him.”
“He enjoyed many things, including sneaking beer, barking at the Fed Ex and trash guys, ice cubes, noms, playing fetch, herding (usually cats, sometimes people), his vet Randy Lange (especially his moustache), road trips, chasing (other dogs, squirrels, and if he could entice a human to chase him that was best of ALL!  Bar Bar would steal your dirty socks, the napkin off your lap just to get you to chase him).”
“Barley was a big french kisser.  He’d lick your face, make you giggle so your mouth was open, then french you when you least expected it!”
“He would wake you up in the morning with a WooWooWoo (his inside voice). Of course, if you didn’t get up he would get a little louder then hop up onto the bed and dig you out of the covers. I used to lie there just so he would get up on the bed, lick my face and make me giggle while he dug me out of the covers.”
“We had the best trip from Tennessee to Arizona. I couldn’t have asked for a better companion. He sniffed wind, got rained on, marked every plant along the way. He loved the hotels and was such a good boy the whole time. I guess Barley knew something special was at the end of that journey.” 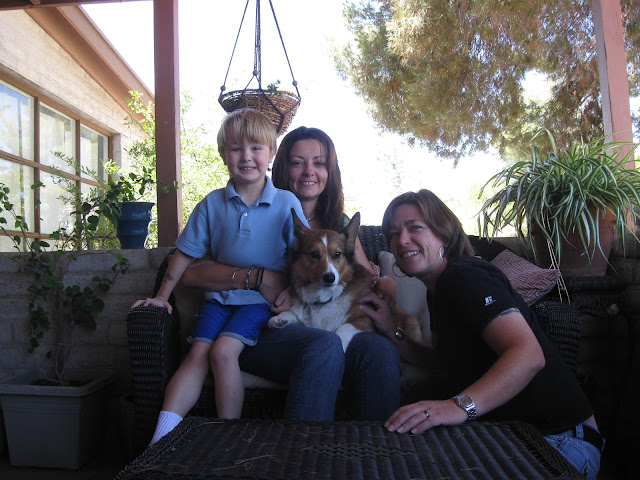 “In true adventurer style, Barley made one last big road trip with me. It was the best one of all. I had gotten a promotion and we were moving to my region: Tucson, Arizona. He didn’t know it, but he would also be getting a family and a human brother all his own: a four year-old named Mikey!”
“Barley made himself right at home on the warm gravel in his new yard and quickly took to Shawna and Mikey. You’d have thought he was the one that had known them for years, not me.” 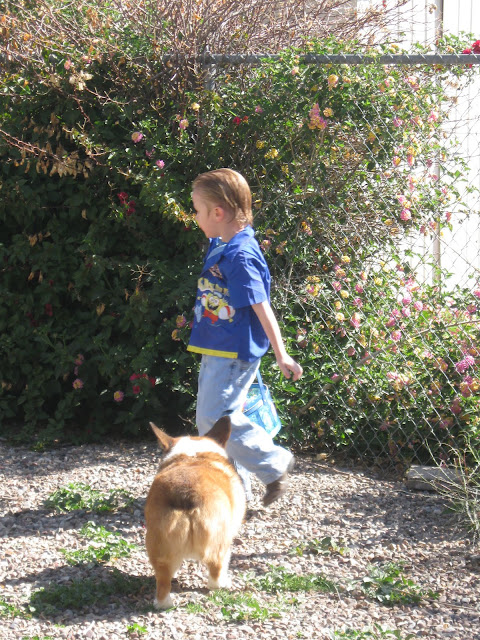 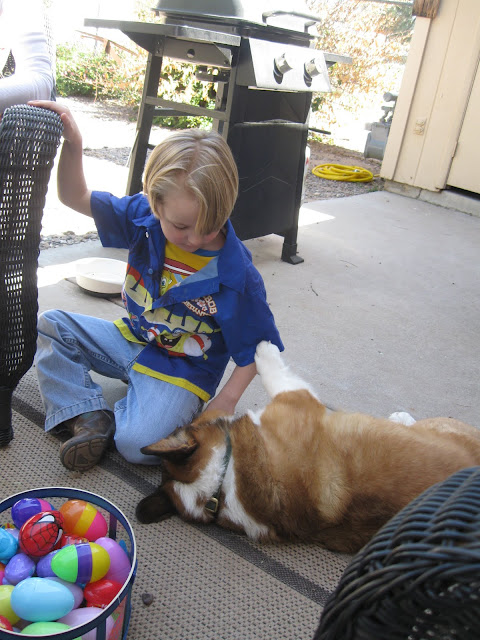 “They were very close. Mikey will tell you BarBar was his bestie.”
“I traveled for work and was out of town two nights a week. Barley and Shawna took care of each other for me. That made being away a little easier. He was up to his tricks right away … stealing Mikey’s toys and getting us to chase him. He really liked Shawna’s giant, pink, fuzzy slipper boots. At first he’d just sniff and lay on them, then one day he grabbed one and ran like heck with it! It was so hard to be mad at him for stealing stuff since he was so fast and so wiggly you couldn’t catch him, and you’d be laughing long before you ever retrieved your stuff.” 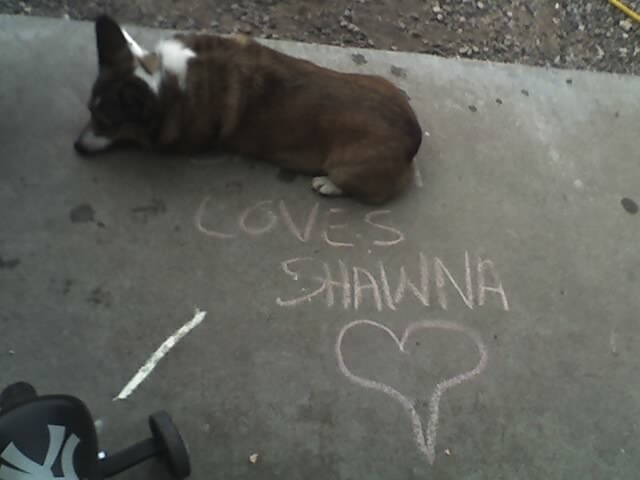 “We found our house and closed just a few months after we moved to Arizona. Barley would have lots of room and a big yard for him to chase the other midget. We were in the midst of moving madness when Barley started having trouble going potty. It was a rough couple of months trying to figure out what was wrong, what helped, getting hope, losing hope and losing Barley.” 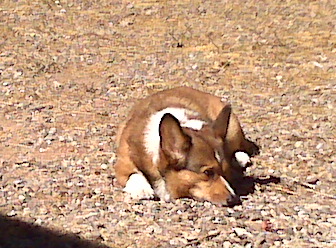 “He didn’t quite make it to his eight birthday last June (prostate cancer). He stuck around for my birthday and for the house warming party and got to steal a tortilla chip from a three year-old as he walked by.”
“We had his cousin Lenny come live with us, and that’s helped keep the house from feeling so empty without that giant personality.” 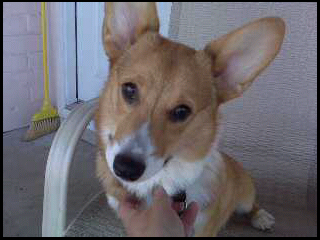 “It’s made us feel like we still have a little part of him here with us.” 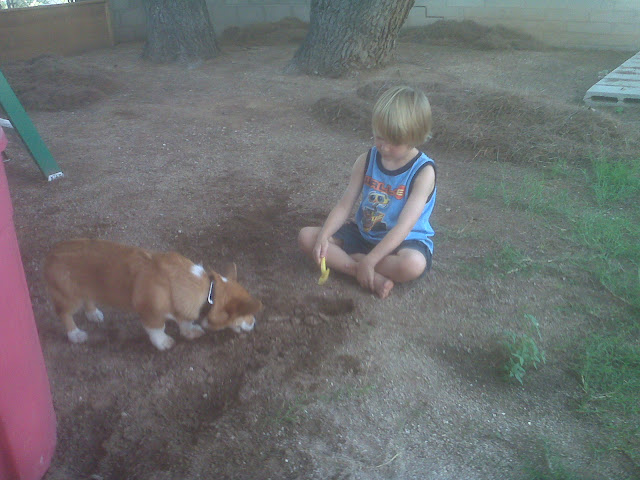 “His name started as Lenny and quickly became Lenny Lenny No NO! And now we also call him Tiny.”

*  *  *  *  *
“Cheers to you Barley!! WOOWOOWOO!“
“You were my best friend, Mikey’s bestie, Shawna’s boyfriend and your smile stole the heart of everyone you met. You were larger than life and your life was way too short.” 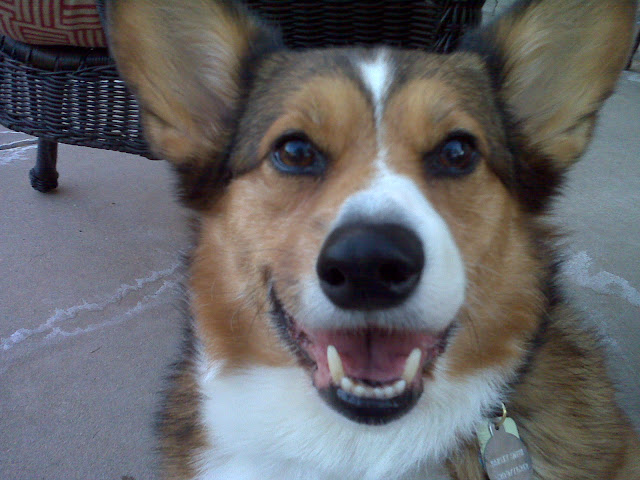 “Thank you for getting me out of bed, protecting me and making sure Mikey, Shawna and I were happy before you crossed the Bridge. Be good over there, you have lots of great canine company to play and chase with, and an endless supply of tennis balls, squirrels and kids too. Have fun with everyone until we get there.”
“We know you’re watching over us as usual, but we made it a little easier … Shawna went to Tennessee and brought your cousin Lenny home to protect us and make us laugh until we see your Big Happy Head again.”
“We love you and miss you big giant like.”
Sandra, Shawna and Mikey
p.s.  Mikey told his Daddy that you follow him around still and keep him safe. Thank you!

Ten year old Frankie stakes out his favorite spot on the couch. Flooftastic.   Jasper still looks a lot like a puppy, but he ... END_OF_DOCUMENT_TOKEN_TO_BE_REPLACED