Cari and Bill H.’s resident pack is quite a bunch of characters!  There are five Pems, 1 Cardi mix, 1 Pem mix, a Pom-Chih mix, a red heeler mix and an Aussie mix farm dog … enough for a baseball team!
You will fall in love with this bunch.
*  *  *  *  *
“Seven year-old Tag A. Long (aka Tag) was our first; we call her the Originator Corginator. She is the reason for all the Corgi chaos in our house. My husband wasn’t crazy about us getting a Corgi as he hadn’t had good experiences with smaller dogs, but after much begging we got Tag. “ 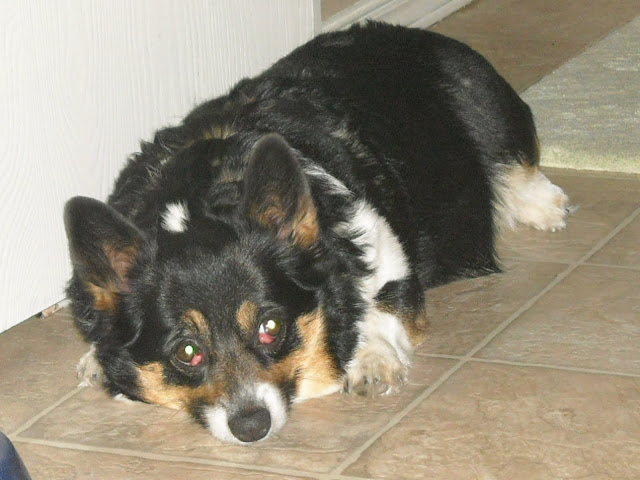 (Ed. note:  As we know, Corgis are actually big dogs.  None of us are fooled by the smaller bodies).
“My daughter wanted a Corgi so bad and we couldn’t seem to find one fairly close.  I told her that when God found the Corgi that belonged in our family, he would let us know.  Then one day my ex-husband called to say there were some Corgis in the paper about three hours away.  So he made arrangments to go look, and I sent Shae off for a visit with enough money for a deposit, even though she insisted she “wanted a brown one.”  I told her to just look.” 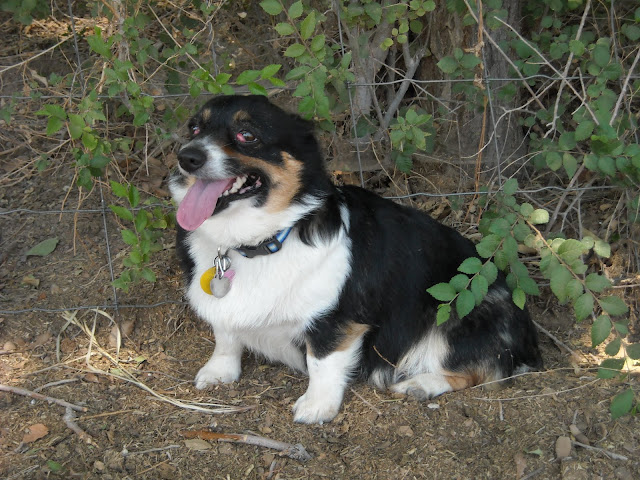 “When she arrived and sat down on the floor, the puppies were released and Tag came running through the house, jumping right into her arms.  The lady later told me it was like she had been waiting for her.  Almost like they were meant to meet.” 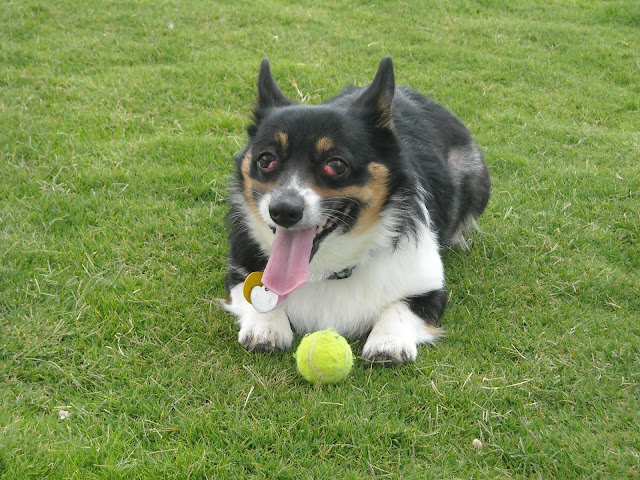 “Tag loves to ride in the car and bark at motorcycles (bubble heads).  She has allergies but is an awesome companion and gives the best Corgi hugs ever!  I’ve learned from her that everything works itself out, just calm down and love the Corgi.” 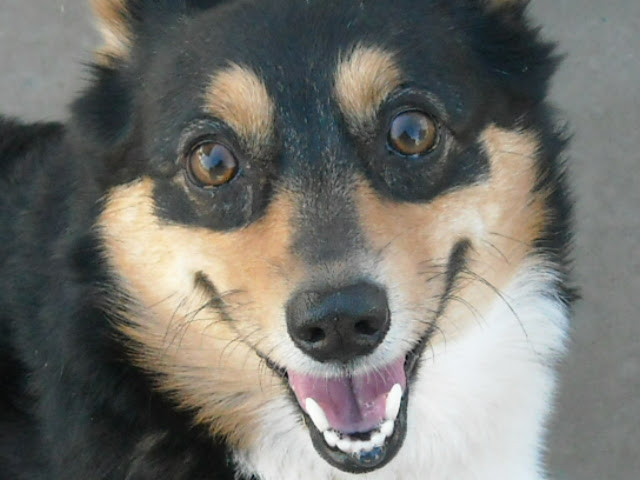 “This is Razz (JoJo’s Crystal Razz), a full sister to Tag from a different litter.  “Razzle Berry” was the only surviving puppy from her litter, and my daughter sold her English saddle to get Razz.” 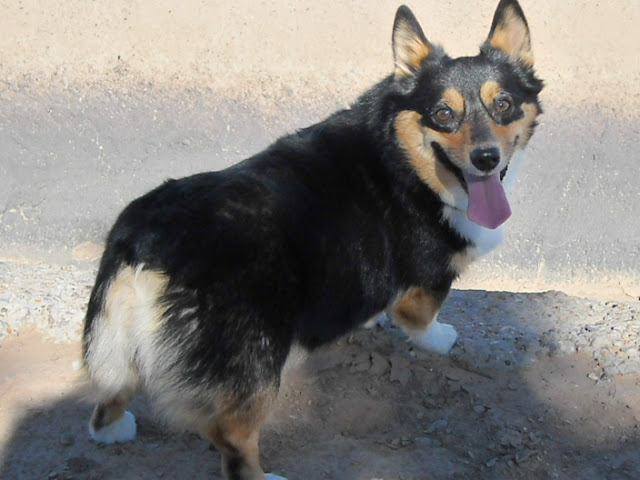 “We fondly refer to Razz as the rebel.  She loves balls, going for rides in the jeep, and we’ve started her on herding.  She is a neurotic pack member, with a little alone-a-phobia.  Razz loves balls and can even balance one on her nose.” 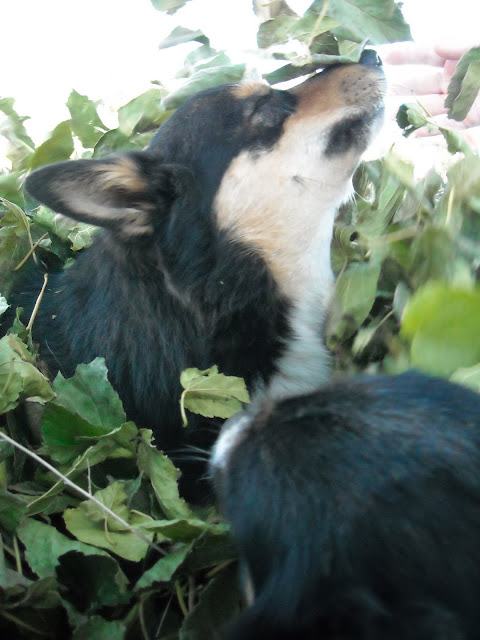 “She has taught me that everyday is an adventure, and showed me how to take the world head on!” 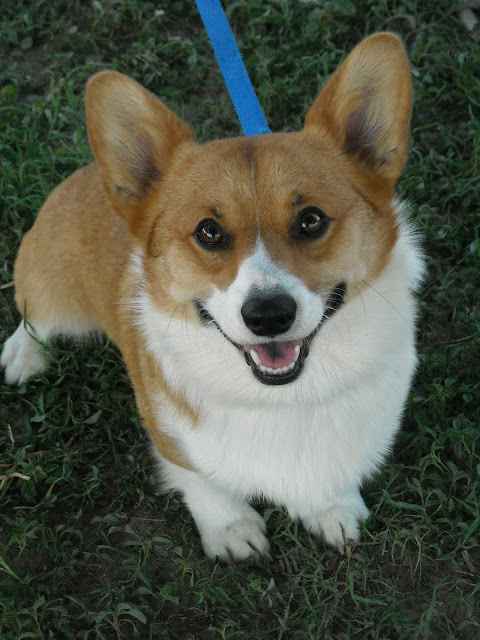 “Next is Charm (Rascal’s Prinz Charming), our sweet Corgi ambassador. Three year-old Charm is our certified therapy and reading dog. His name suits him well.  He wins everyone over with his calm loving demeanor, and many people have expressed interest in the breed after meeting him.  He has his Canine Good Citizen certification.  Charm is our hall monitor and makes sure everyone stays in line.”
“He also herds both ducks and sheep, although I need a lot of work before we can compete. He’s a natural.  Charm has taught me that you can brighten someone’s whole day just by stopping by for a belly rub.” 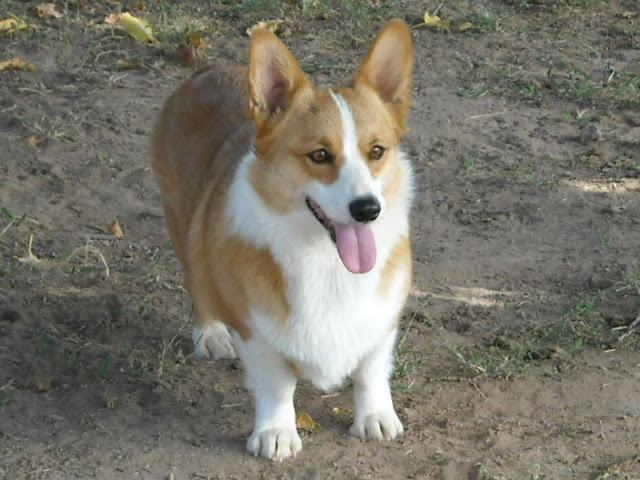 “Two year-old Lucky (Sgt’s Lucky Tank, aka Lucky Pup) is Charm’s full brother from a different litter.  Lucky has had to deal with a torn ACL.  He’s a super sweet guy and loves my grandson with all his heart.  He likes naps and soaking in the wading pool.  From Lucky I’ve learned that you’re only as handicapped as you let yourself be.” 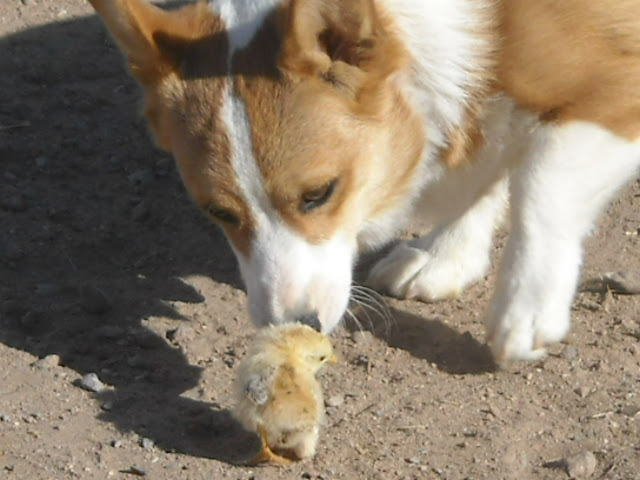 “This is my favorite picture of him.  His herding instinct just didn’t know what to do when this little chick kept following him around.  He would push it towards me very gently with his nose.  We pasted this pic in my grandson’s copy of the Dr. Seuss book ‘Are You My Mother?'” 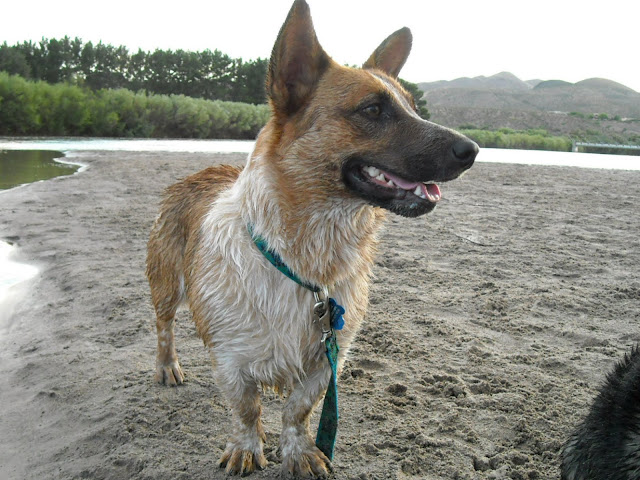 “Next up is Renegade (Ren), a rescue dog we were fostering and decided to adopt.  He is half Cardi and half red heeler.  In typical Cardi fashion, Ren is our clown.  His happy tail (flag) is a common sight around the house. He loves to play and one of his favorite things to do is herd his human pack members down the hall by bumping the backs of their legs with his nose. He is super fast and enjoys chasing a ball and playing in the water.” 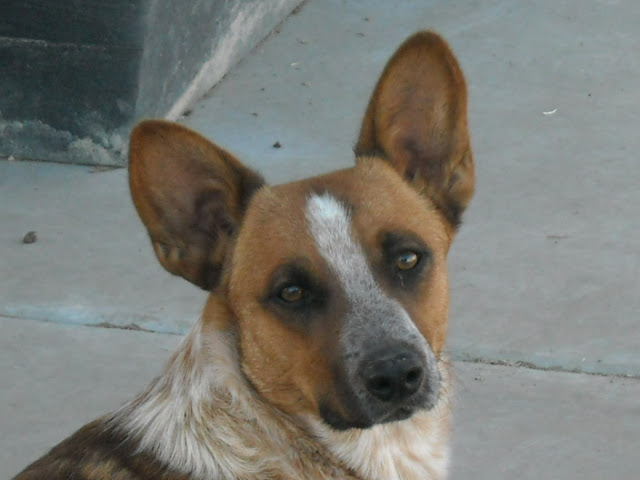 “Ren adores being a farm dog.  Every morning he makes the rounds checking on first the goats, then horses and finally the chickens.  He never fails to make me smile and has taught me that laughter is the best medicine.” 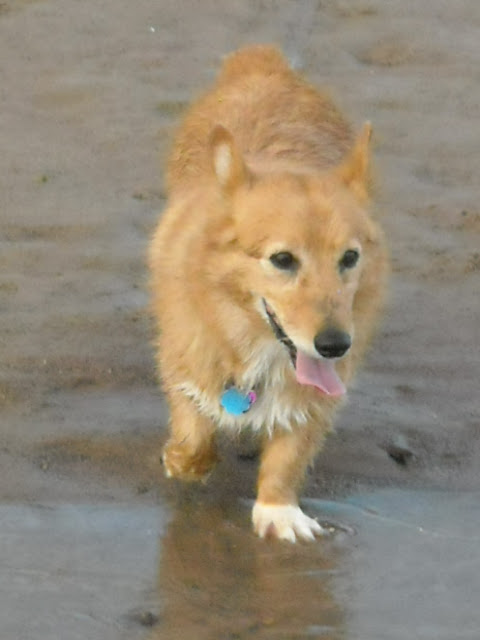 “Then there’s Fred.  Fred is an old guy who came to us as a foster after having been placed unsuccessfully twice.  It’s not Fred’s fault, he’s just an eccentric old guy with issues, but we love his issues.  He can’t hear very well due to irreversible damage to his ear drum.  He has what we refer to as Corgi Tourettes — he sits in the yard and randomly barks.  One bark every 15 to 30 seconds.  He can’t help it, it just pops out, sometimes even when your petting him.”
“Fred has his favorite pomegranate bush, and that’s where you’ll find him everyday at nap time.  But when it’s time for crunchies or cookies WATCH OUT!  Fred does a whirling, leapy spin all over the place and he’ll take you out if you’re not careful.  Fred has taught me there is a place for everyone, sometimes you just have wait.  We’ve decided to adopt Fred too.” 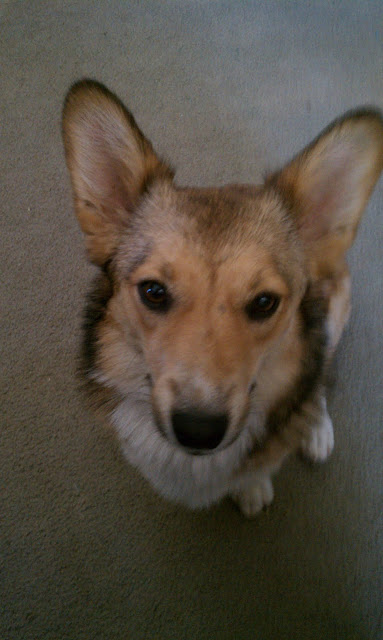 “We found Reyna on Craigslist;  she’s our youngest Corgi.  Her family had to give her up because the infant in the home was allergic to her.  Reyna’s name fits her well too, as she truly thinks she is the queen.  She absolutely loves to play, and in the evenings fraps all over the house with Renegade.  We’re still getting to know Reyna so her lessons for us are yet to be discovered, but I love her enthusiasm.” 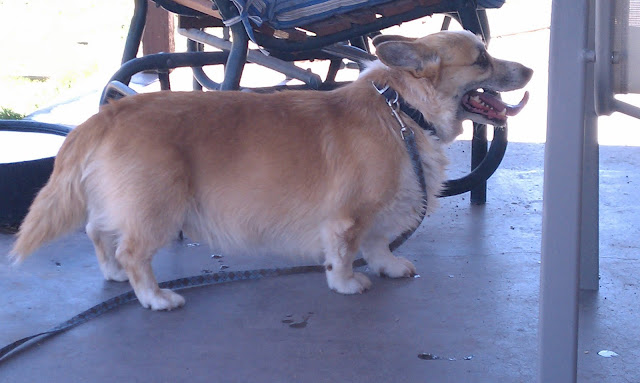 “Lastly we have Buddy.  Buddy has only been with us for about a week, and once I’m able to evaluate his demeanor and get a good health check on him, he will be available for adoption.”
“Buddy was found wandering in a park.  He was very thin and emaciated.  A kind-hearted person took him in and nursed him back to health, but he cannot stay with her as she already has three dogs and her big dog was aggressive towards Buddy.  So far, Buddy has really good manners, he is very quiet and kind.  He loves attention and is house trained (although he has some marking issues and needs to neutered).  But I’m sure we’ll get past that once he has been fixed.”
“We also have Laci (Jack Russell/red heeler mix) who is available for adoption, Linny (Pom/Chih), and Spazz (Aussie mix).”
I say we consider them honorary Corgis, what do you guys think?  😉
*  *  *  *  *
Welcome to The Daily Corgi, buckaroos!
What else is left to say but BAROOOOOOOOOOOO?

Ten year old Frankie stakes out his favorite spot on the couch. Flooftastic.   Jasper still looks a lot like a puppy, but he ... END_OF_DOCUMENT_TOKEN_TO_BE_REPLACED