Andrea M. is head over heels for her rescue Corgis.  This is their story.
“When Bachci was found as a stray dog in Tulsa, he had heartworm, whipworm, a bacterial skin infection, a lung infection, allergies, teeth problems and weighed just 18 pounds. This indescribably stinky boy landed at the Humane Society in Boulder, Colorado in hopes of finding himself a home.” 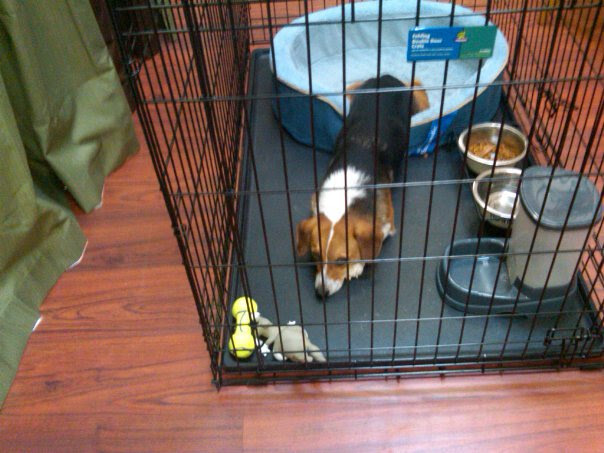 “We adopted him, changed his name from Squirt to Bachci and started his medical treatments. He had to spend ten weeks in a crate, a.k.a. “the box of misery.”  He actually danced when we took it apart and put it in storage!”
“Once he was healthy, Bachci bloomed into an amazing little dog. He has a tiny fur-less patch on the underside of each ear and his lower front teeth are missing, but otherwise he’s in perfect health and weighs in at 25 pounds.” 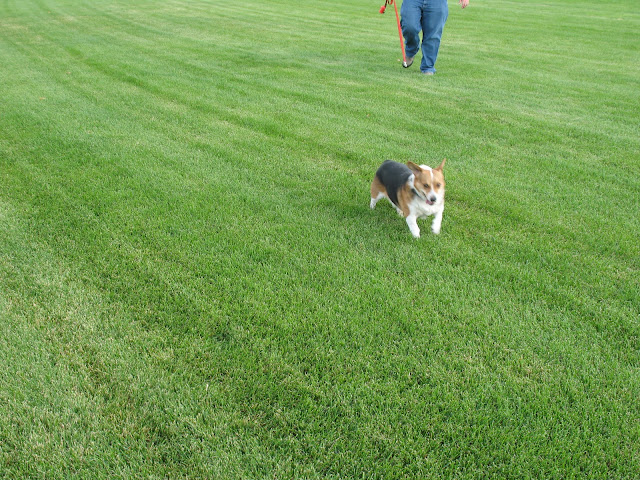 “Being outside is Bachci’s favorite thing in the world.  He loves to walk, romp, and visit the park by our house, where he can chase ducks and watch the prairie dogs.  Bachci enjoys playing and thinks his vet is the greatest person alive.  While he likes to be petted, he prefers to be hugged.  He dances when he’s happy and “nubs” so much he actually has stronger than normal hips and abs for a dog his size. (The vet was hugely amused).” 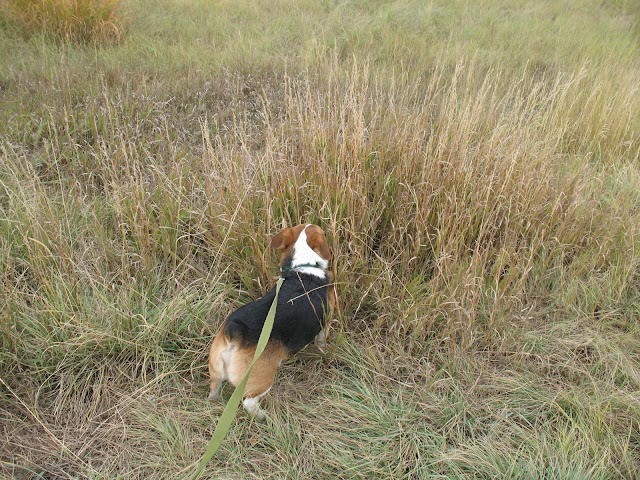 “Bachci can be nervous around big dogs and is still obsessed with stealing McDonald’s hamburger wrappers out of the neighbor’s garbage, but otherwise you’d never know he was a stray.  Although he’s a good eater, Bachci is extremely picky about his treats and won’t do biscuits, preferring instead a dehydrated chicken chew.” 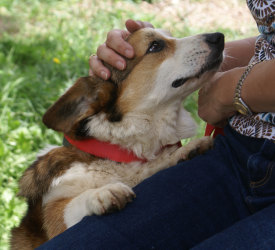 “Frapaccino, who turned seven last March, was originally named Sloppy Joe by his hoarder owner.  The shelter workers in Pine, Colorado told us he was extremely mellow for a Corgi, but I think he just wasn’t feeling well. After putting on a healthy eight pounds and regular walks to get back into shape, Frapaccino is all Corgi now!” 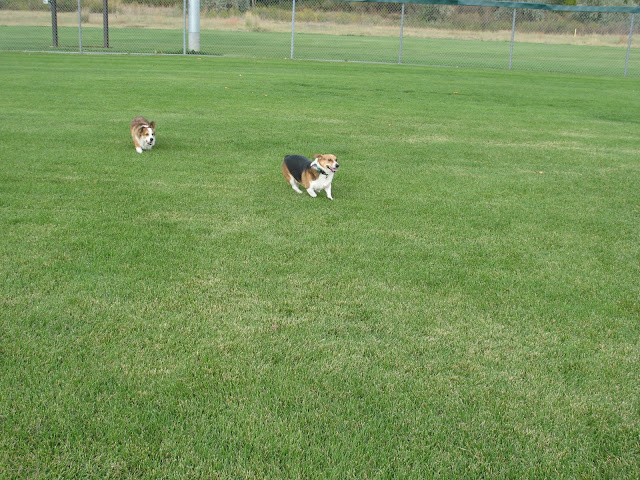 “Like Bachci, he enjoys his walks and happily “fights” with him in the park.  He enjoys the open space, but could care less about ducks, prairie dogs or squirrels.  When Bachci chases a squirrel, Frapaccino runs with him but doesn’t look at the squirrel.  He’s just thrilled to have a Corgi buddy to run with.”
“Frapaccino will walk up to anyone (including the occasional bemused police officer) to be pet, told he’s a pretty boy, and get his tummy rubbed.  He LOVES having his tummy rubbed.” 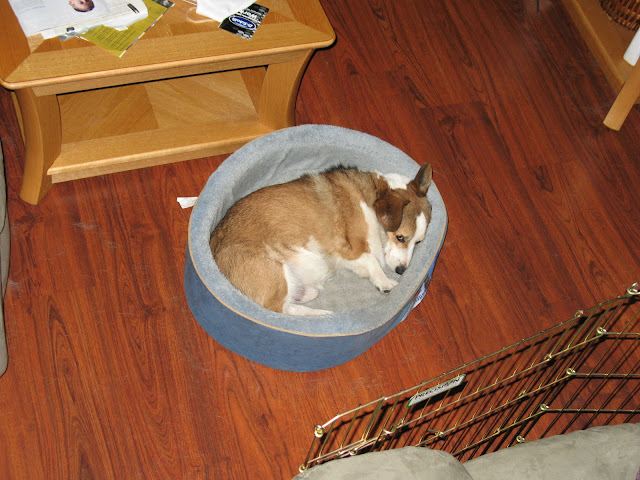 “Frapaccino was a little distrustful of the whole dog bed thing when we brought him home, but once Bachci showed him the ropes, he quickly because a fan.  He adores him and mimics his behavior.”
“Because he adores food, any kind of food, Frapaccino is often utterly confused by Bachci’s pickiness. They enthusiastically agree on pig ears and Science Diet canned chicken stew, however.” 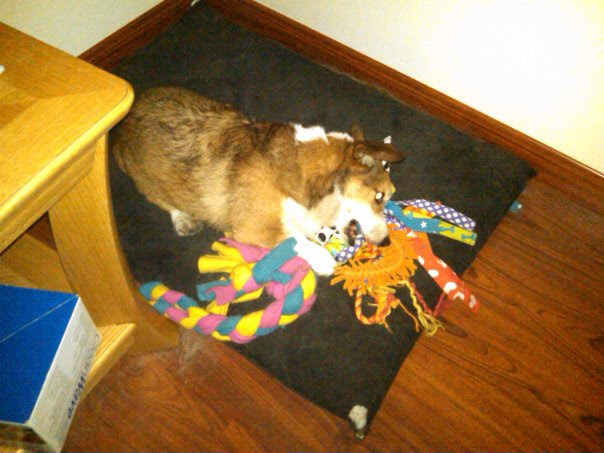 “Frapaccino learned how to play with toys from Bachci (who learned from our rabbits). He impressed our vet with how “respectful” he was of her, not something Corgis are known for.  The biggest trouble she has is getting him to stop licking her long enough to hear his heartbeat. She also struggles with keeping him on his feet on the exam table, as he’d rather flop over for a tummy scratch.”
“Both boys are polite to our rabbits.  They share a strong dislike of the groomer’s, but think Petsmart is just fine.  Because he barks at them every time we walk by, they hate the Eskimo Dog across the green space.  Bachci and Frapaccino are very good boys and don’t bark back.  They also don’t care much for the neighborhood teacup Chihuahua (Bachci gets stressed out … what is that?), but will play with the friendly dogs.” 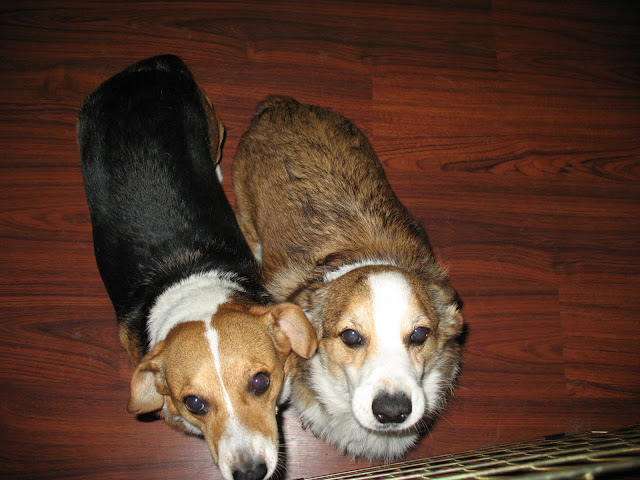 “They meet us at the door when we come home and think it’s their job to help us get the mail, even on Sundays. They both “talk” like Corgis, with Frapaccino being the more vocal of the two, but neither really bark or howl unless there is a reason to.”
“I’m sorry I wrote a book, but I am totally in love with these dogs.”
*  *  *  *  *
Welcome to The Daily Corgi, kiddos!
You’re FRAP-tastic!

Ten year old Frankie stakes out his favorite spot on the couch. Flooftastic.   Jasper still looks a lot like a puppy, but he ... END_OF_DOCUMENT_TOKEN_TO_BE_REPLACED