Towsen was a compromise for Glenna F. and her hubby Ron, who ten years ago wanted a dog but couldn’t agree on a breed. One look at “squashed Sheltie” Towsen (“short like me” cheered Ron) swiftly settled things. A Corgi it would be! 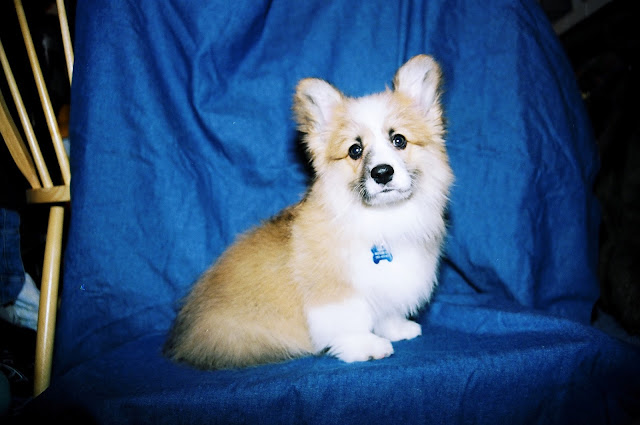 (As if there was ever any other choice).
“We named him Towsen
after Towson, Maryland” writes Glenna. “I changed the o to an e to help people say it correctly
but that never helped. He is officially Corgard Where all Roads Lead.”
“Well, The Roads Led to much more. Towsen quickly became the star
of puppy kindergarten and in spite of our difficulty housebreaking him, he was very smart
and quickly learned many commands. Towsen took moving to a new house in stride and
when I broke my leg about a month later, he became a service dog, picking up
items I dropped, dragging hangers across the floor and pulling my socks off on
command. He even wore those little boots to go outside in the mud. He had been a therapy dog and visited nursing homes. We started
agility after my leg healed and he loved it.” 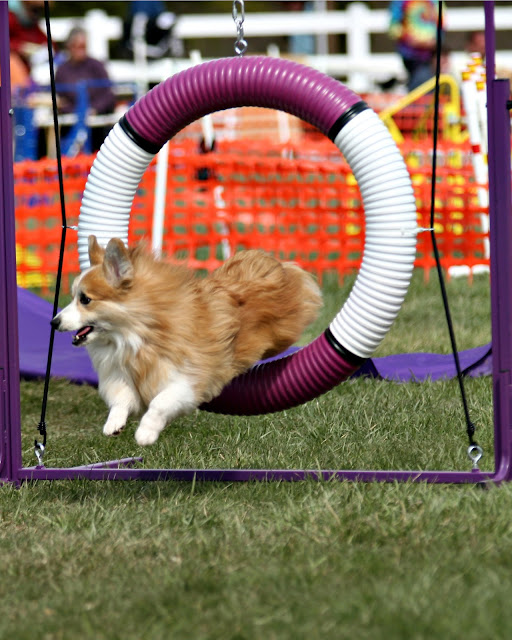 “He loves just about anything, actually! Towsen was my first dog in everything.
He exceeded my expectations and still does. He has entertained countless fans and I always say that if we didn’t Q, at least we entertained. Towsen always puts his fullest energy
into doing anything. A little too much energy. I was exhausted! That’s when we got Dela,
our second Corgi.” 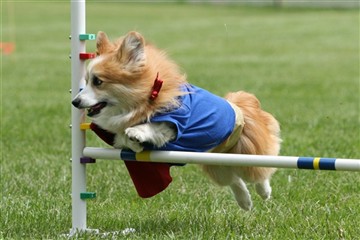 “Towsen has run across the rally ring and before anybody could catch him he
ripped off the mesh on the bowls and started chowing down. Laughter only eggs him on. He loves getting his photo taken, as some
observed during the long sit and down at another Corgi specialty. The
steward actually reprimanded them, as the two ladies were making such a ruckus. Towsen
has been known to steal food off of chairs then look so innocent. His exploits would take hours to tell!” 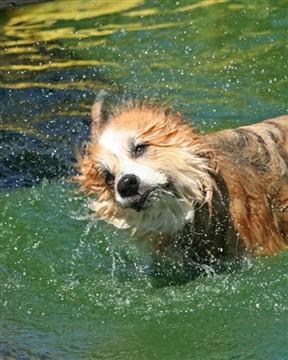 “One incident I will always remember vividly. Before we built the fence, he ran after a deer and disappeared for the longest five minutes of my life. I cried when he came back and refused my husband’s insistence that I should punish him. The next day our boy got a title in Rally at the Harrisburg Kennel Club, 1st place, and then 1st place in Novice Obedience. My husband just shook his head and kept telling Towsen that he totally made up for the night before. That’s the sort of thing Towsen gets into.” 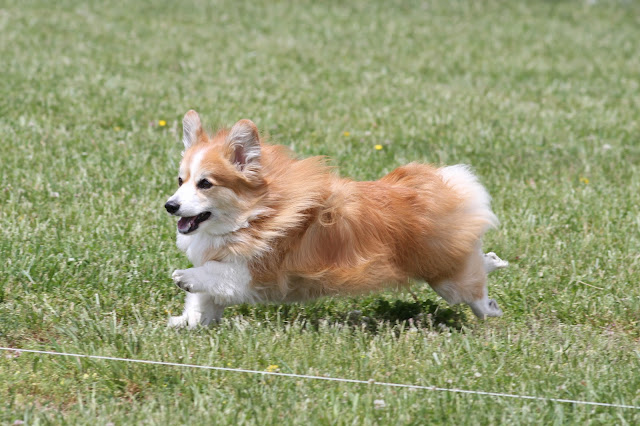 “He has dome some amazing things with kids. We have none, so
I was amazed how gentle he is with little ones looking for his tail or grabbing
his big ears. We are stopped all the time by people who just love his
expression and the intelligence in his eyes. Young children afraid of
dogs squeal with delight and run up to him when he goes belly up at a dog
walk. In fact he gets so relaxed that other walkers ask if he’s OK!” 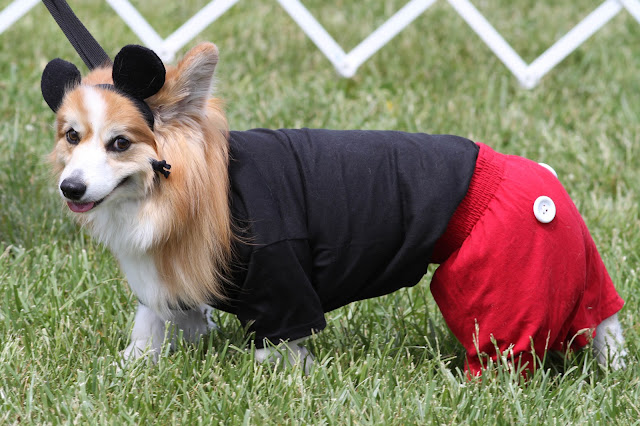 “He takes donning clothes in stride and enjoys the attention so much that when my
sister put bunny ears on him, he turned and stared at her, waiting for his photo op. He amazes us with his understanding. Towsen has taken pens off the dining room table and dropped them near me so I would ask him to pick them
up, knowing full well cookies would be rendered for his service. Astonishing.” 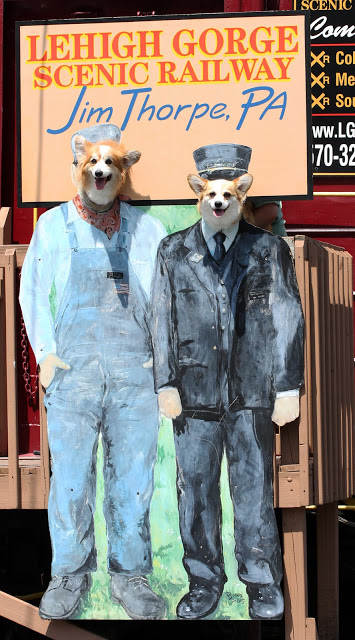 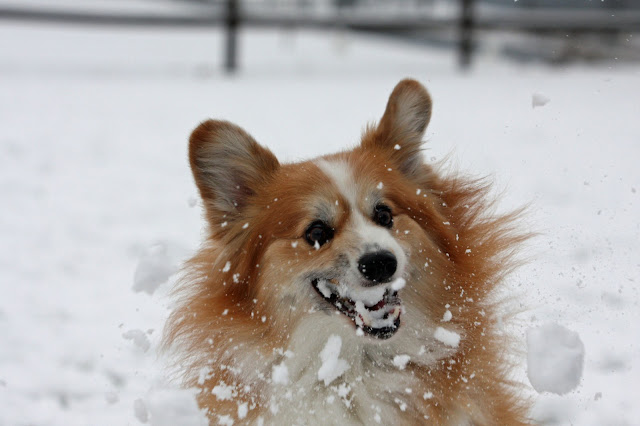 “At 10 years of age, Towsen hasn’t slowed a bit. He was the
fastest Corgi of all heights in the T2B at the PWCCP Agility Trial in 2012. Dela
and even Howie our three year-old hide when Towsen fraps. He is especially happy
when he has a sock but gladdest with one of my hair scrunchies. I
watch him slowly sneak into the bathroom and pluck a scrunchie off the counter then sneak back into the hallway before cutting loose in a gleeful frap.” 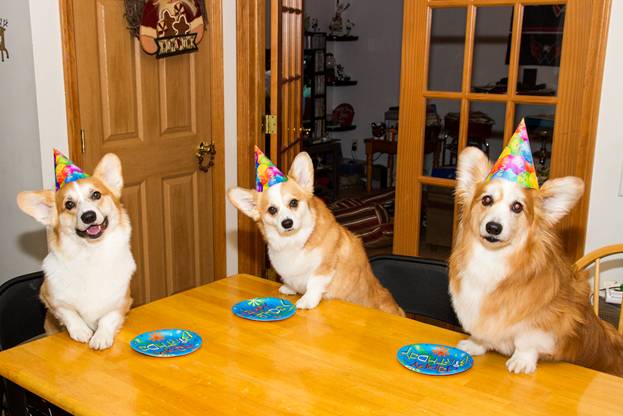 Will there be ice cream with that cake? Howie, Dela and Towsen at his tenth birthday in January, 2013

“Our Corgis have brought many friends and so much joy into our lives. Best friends in fact. Towsen’s antics have won the hearts of many people. The mirth will no doubt continue as we enter our tenth year with agility trials, lure coursing, herding, trips to Costco and the Bass Pro Shop. We’ll never be able to say “ice cream” in our house because of him. Spelling doesn’t work either, as he learned that quickly enough.” 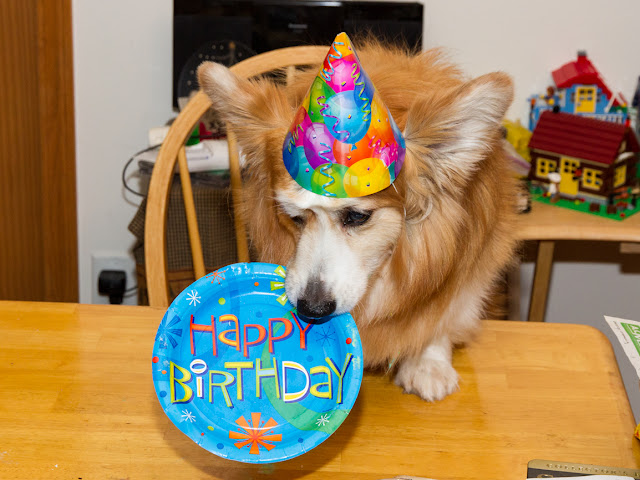 “Perhaps Towsen will write his book someday and leave the poor cat alone. With God’s grace we’ll have many more years of sharing life with this special Corgi.”

Ten year old Frankie stakes out his favorite spot on the couch. Flooftastic.   Jasper still looks a lot like a puppy, but he ... END_OF_DOCUMENT_TOKEN_TO_BE_REPLACED