Some stories are best told by the people who have lived them. Daily Corgi reader Denise Baker of Ojai, California graces the blog today with the true life tale of her remarkable Denby Dog. 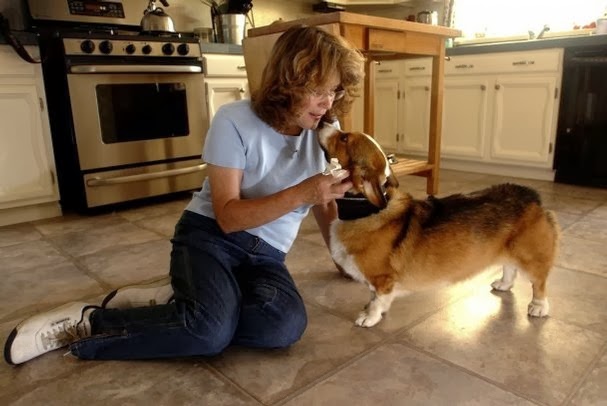 
Everyone who lives with a Corgi thinks their Corgi is extra special. In my eyes, my beloved Denby has more than earned that honor. Can your Corgi eat, drink and blink? Denby, my twelve year-old Pembroke, hasn’t been able to eat, drink or blink since August of 2004. That was the last time I saw the famous Corgi grin on his beautiful face and the last time he gave me wet puppy kisses. 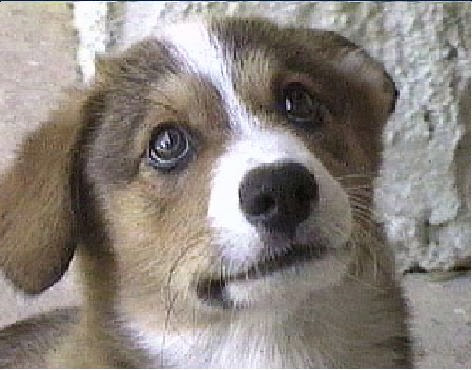 Can your Corgi run? Denby’s Red Racer cart has replaced his stubby Corgi legs and his disrespect for sidewalk curbs has landed him upside down on more than one occasion. He can still wiggle his bunny butt and do the Corgi back roll with all the joyfulness that declares life is still well worth living. 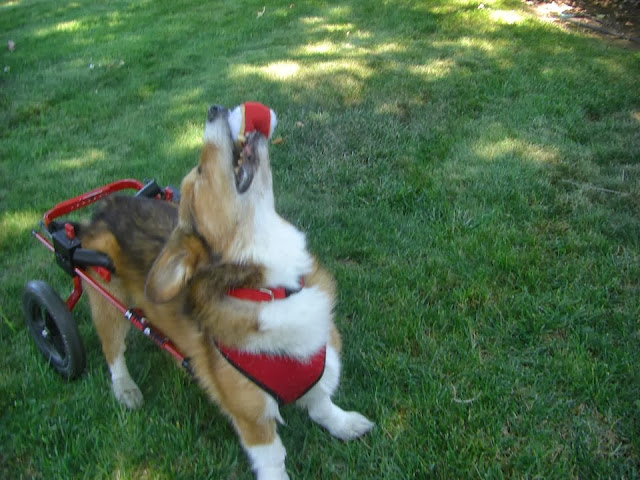 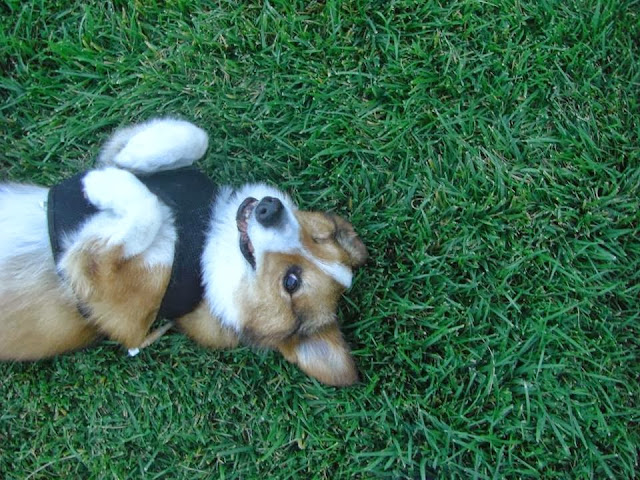 What happened to Denby? It began with bubbles in a bowl. On a hot August night in 2004, I laughed as Denby blew bubbles in a clear water bowl while visiting a neighbor. What a talented dog I thought I had, until my neighbor pointed out something unusual. Despite Denby’s “lapping”, the water level remained the same. Searching the internet for “dogs blowing bubbles” I found videos celebrating this behavior and dismissed my worry. To this day I am haunted by that mistake. If you are worried about your Corgi, don’t consult the internet. Take your dog to a vet!

Denby was becoming Mr. Grumpy and spending even longer periods of time at his water bowl. Finally, I made that much delayed appointment with the Animal Clinic of Oak View. When I told the vet what Denby was doing, he said “Show me.” A water bowl was brought into the exam room and Denby demonstrated how he would completely submerge his nose below the water line and blow bubbles. Grimly, the vet looked at me and said “Your dog is very sick.” Suspecting a brain tumor, he referred us to a neurologist who ordered an MRI. Even though the results came back normal, it was becoming evident that Denby could no longer grimace, blink or control his tongue. He was eventually diagnosed with idiopathic (meaning the cause is unknown) cranial nerve damage. It was irreversible.

Knowing that Denby wasn’t dying of a brain tumor was a relief, but he could no longer eat food without choking. Despite my attempts to syringe water into his mouth, he was becoming dangerously dehydrated. Our visits to the vet became daily as the situation grew dire. It was then that Denby’s vet presented me with my options: do nothing and watch Denby become dehydrated and weak (which, of course, neither the vet nor I would allow), euthanize Denby, or place an esophageal feeding tube into the side of his neck. Through this tube I would be able to feed Denby, give him water and medications and buy us time to monitor his health, to see if the situation would deteriorate any further or if it would stabilize.

I made my decision. In the Fall of 2004, Denby had his first esophageal feeding tube surgically implanted. Feeding Denby is a multiple times a day procedure, fit in between my work hours. I blend prescription dog food and then slowly syringe it into Denby’s feeding tube. He can sleep and eat at the same time. Now that’s multi-tasking taken to an extreme! 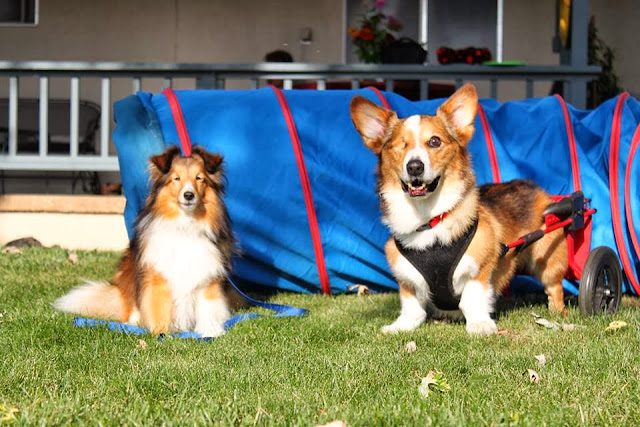 With his feeding tube in place, Denby’s days were no different than any other Corgi’s. Chasing squirrels, catching Frisbees mid-air (even after the loss of an eye due to a corneal tear in 2009), naps in the sun and even some agility work. Life was fairly normal for him until December of 2011, when I first heard a peculiar sound on the concrete sidewalks while walking Denby. His right hind paw was dragging. This time I didn’t wait. I took him to our vet. At that appointment, it was clear Denby was no longer able to reposition his back paw. The reflex to flip his paw back was absent. Like so many years before, I was told that Denby was very sick. He had all the signs of Degenerative Myelopathy. A genetic test later confirmed my worst fears. This deadly stalker of our beloved breed had selected Denby for yet another challenge.

Denby became an official member of the Wheelcorgis club in June, 2012 when he was fitted for his Red Racer, a two wheeled cart that serves as his wheelchair. It will be converted to a four wheel cart when he loses the ability to stand on his front legs. After a period of adustment, I knew I had made the right decision for Denby when he went flying down the street on his racing wheels in pursuit of a little white fluffy dog. He hasn’t looked back since. 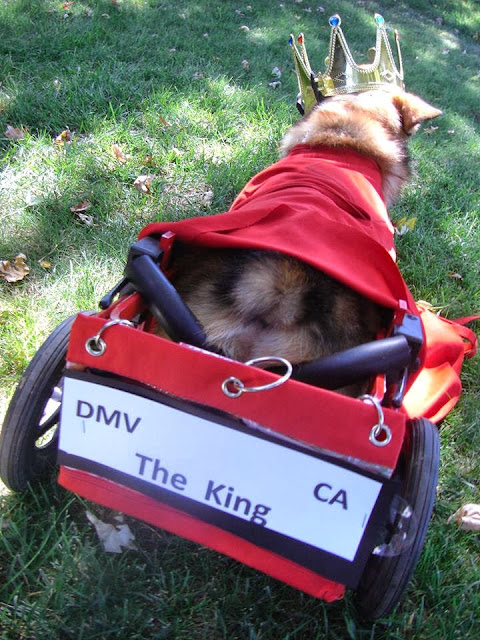 Denby has his own Hall of Fame at our vet’s office. It all began back in 2004 with one little card I sent to the office. I started sending homemade paper crafts with Denby’s pictures on them. Next thing I knew, they created a wall display of all the things I had given them, an area so big it’s nearly five feet wide and eight feet tall!  I’m thinking about a picture with Team Denby (what I affectionately call the staff) in front of it. Honestly, it is such fun to watch people stand and read about Denby’s journey of the past nine years while he and I are sitting there. 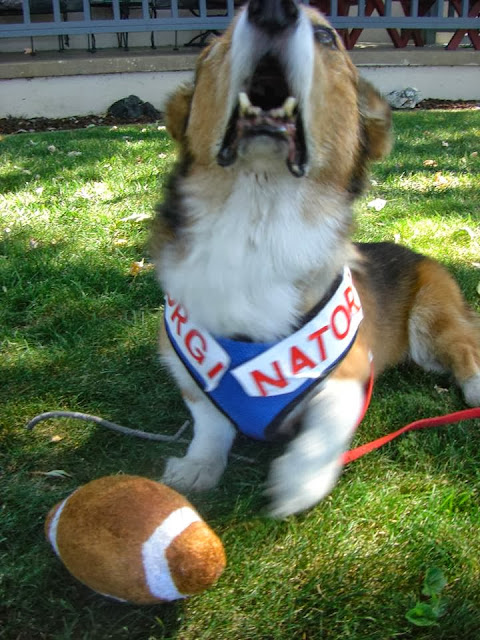 I am often asked why I’ve gone to such extremes in taking care of Denby. “He’s a dog” people say. I never know how to respond. They think I’m not aware that he has paws instead of feet, that he barks instead of speaking, that the entire back yard is his bathroom? That he doesn’t worry about tomorrow because he only lives for today? “Why?” they ask. Because he would do no less if it were me. That’s why. 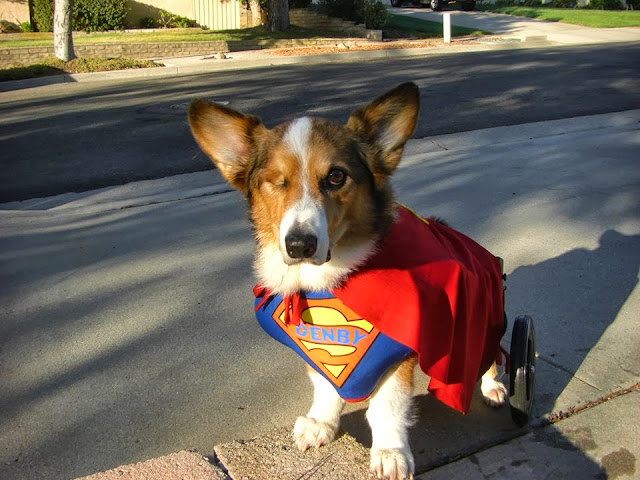 During one of the darkest days of Denby’s life, I saw a picture of a Corgi with a quote by Mark Twain. “It’s not the size of the dog in the fight, it’s the size of the fight in the dog.” If I didn’t know better, I would have thought Mr. Twain had met Denby Dog. 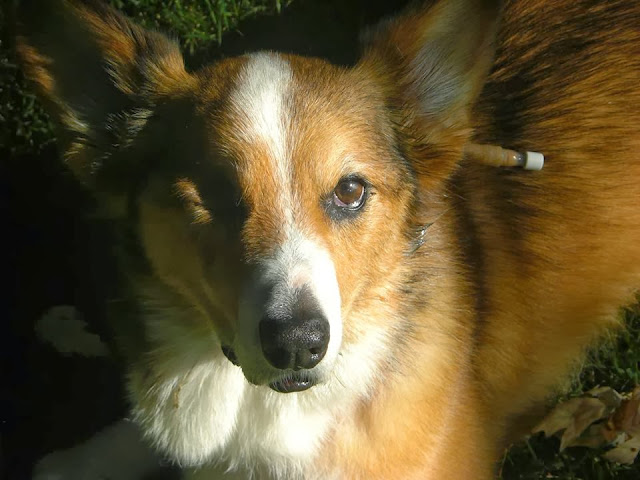 I share Denby’s journey, not because I want you to know what he has lost, but rather what he still has: the spirit of adaptability and tenacity to live life to the fullest. I hope you will find his Corgi spirit inspiring and take a moment to appreciate just how lucky you are to share your life with your own Corgi. 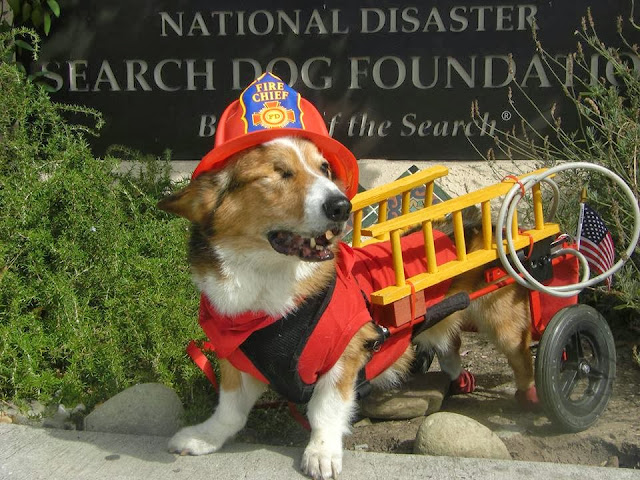 Postscript: Denby’s story has been translated into German and featured on the international site Welsh Corgi News.

Ten year old Frankie stakes out his favorite spot on the couch. Flooftastic.   Jasper still looks a lot like a puppy, but he ... END_OF_DOCUMENT_TOKEN_TO_BE_REPLACED