Giulia and Wayne of Tennessee found Sammie three years ago running scared on the roads of Winter Park, Florida. 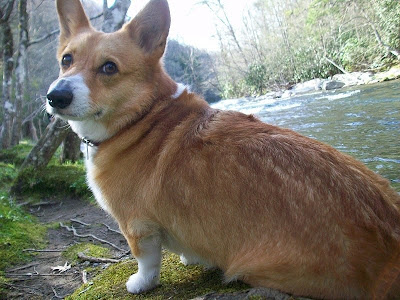 “We learned that his old owner was an abusive one with a drinking problem, and would often let him out and forget to check on him. We wondered how he would be violent to such a cute little thing!  Sammie has since become more extroverted, has learned how to play with toys and a few basic commands, and won’t leave my side.  He sure is a mommy’s boy, always with a (bug) eye or a (bunny) ear on me, following my every move.”

“Since we moved to Tennessee, Sammie has seen snow for the first time and hiked in it too! Well, sort of … he got carried for a mile or two.  He loves to be outside, swimming in the river, or sunning on the deck.” 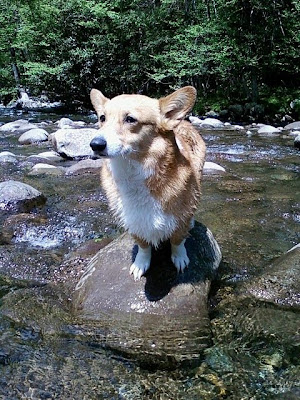 As you can see from the pictures he does NOT like baths, but sure likes the rolling on the carpet afterwards. My husband always takes Sammie along when he goes for car rides, and Sammie has now claimed our Jeep as his own.  I have to fight with him over the passenger seat!” 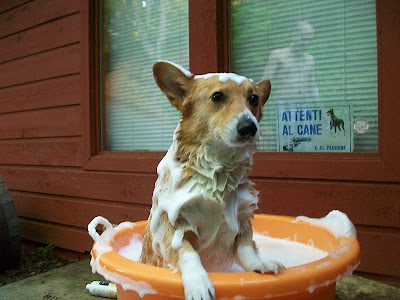 “Because Sammie was missing his Florida cousins (the Shepherd mix, the Doberman and his girlfriend Sparky the Dachshund, who is also on facebook), in late July we rescued a two year-old Corgi named Riley.” 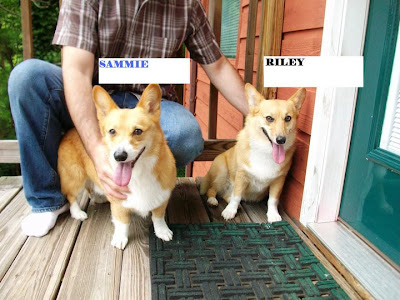 “Of course we would have loved to get a cute and fuzzy puppy from our fantastic local breeder, but Riley needed a home.  It is a little weird to adopt a dog who has already a personality of its own (even though she is only two, Riley is definitely her own little creature), and you feel like you don’t know her much. But you can never go wrong with a Corgi!  She has such a goofy, funny and solar personality. The morning after we got her, we put her on our bed (as we do with Sammie) to watch some TV and for some snuggling, and she just started giving us kisses, jumping around, rolling in the blanket.  It was a good beginning!”
“Riley is the wild one, with a good heart but no listening skills. Such a little Tasmanian Devil.  Sammie is the quiet one, who will act like a smarty-pants-know-it-all to make sure Riley stays in line.  She is really a great addition, and while Sammie is “my dog”, Riley is mostly Wayne’s dog. Riley is definitely more fox than dog, and she is taller than Sam. People ask how we tell them apart!  It just so happens that they have very similar markings and coloring.”
“Riley has picked up on Sammie’s vocal expressions, and now they bark in unison any chance they get, but she doesn’t seem to know how to howl. Sam howls anytime someone sings and is the star of every birthday party we go to. But give her time — Riley will be as loud as Sammie in no time and we’ll have a duet soon!”

“It has been a learning process, and we are tremendously lucky to have found Sammie first, and Riley now.  We can’t imagine not coming home to happy barks, little grunts, stretches and baroos, her smiling goofy face, and their overall Corgi-ness every day!  A big thank you needs to go to the rescue people (Pembroke Welsh Corgi Rescue League of Atlanta, Jody and Michael), true match-makers!”
“I guess we can finally be diagnosed as having an Obsessive Corgi Disorder … it just took two to realize it!
*  *  *  *  *
Welcome to The Daily Corgi, Sammie and Riley!
You guys are doubly delicious:
Corgi Power + Rescue Power … PAW-some!

Ten year old Frankie stakes out his favorite spot on the couch. Flooftastic.   Jasper still looks a lot like a puppy, but he ... END_OF_DOCUMENT_TOKEN_TO_BE_REPLACED