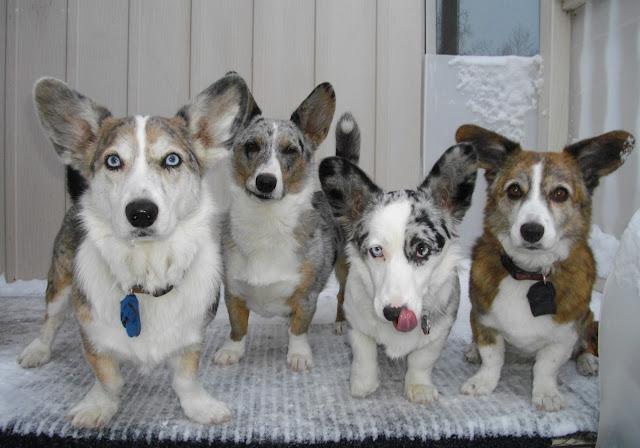 Left to right:  Brychan (The Icicle Nose), Olwyn (The Attitude), Saiorse (the Tongue) and Ivy (The Ears).

“There are absolutely no Cardigans, other than my little pack of blues (and one brindle), here in Cochrane, Alberta (Canada), so I’m constantly being stopped and ask what kind of mix those “funny little dogs” are. Saiorse has one yin-yang eye (half brown half blue), and that really catches peoples’ attention.” 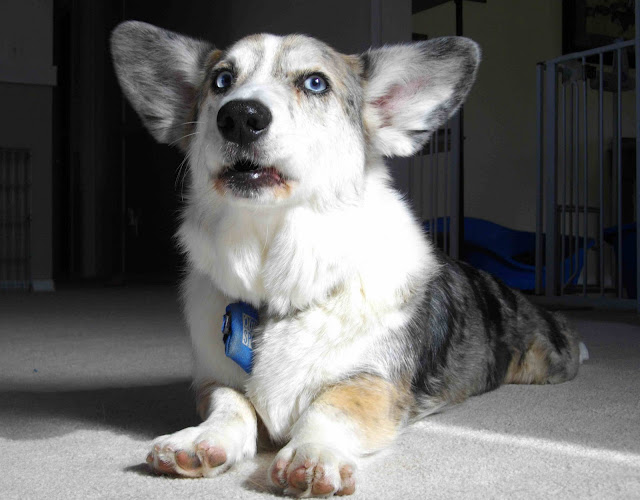 “Brychan, a blue boy from Shadowalk in Montana, was my first Cardi. I had just made the horrid decision to put down my Doberman bitch. Years before, I had seen a photo of a blue Cardigan on the cover of Dog Fancy and I knew that someday this would be the breed for me. It was love at first sight.”

“I had met the Shadowalk folks a number of times at a CKC show in Calgary. After my Dobie bitch passed, I checked the Shadowalk website and lo and behold, a litter with several blue males was born the very day I had to put my Dobie down. I contacted them immediately, and happily was able to get the very stern looking little pup that was my instant favourite on their website. When he was old enough, I drove to Great Falls, Montana and picked him up. Brychan has been my constant companion ever since.” 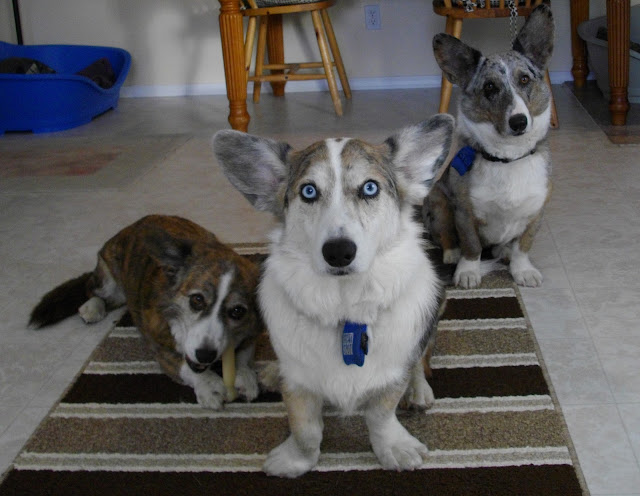 “Brychan turns six this March. At times he’s a stern little fellow, but a more loyal guy you’ll never meet.  If we’re walking alone and we are approached by a stranger who seems unfriendly, Brychan will instantly put himself between me and the stranger, rumbling until he determines if it is friend or foe.”

“Unfortunately, his front leg became deformed as he grew, as is the case sometimes in our dwarf breed. I had hoped to try him in agility and herding, as he was certainly keen, but the potential instability of that leg changed my mind. However, he has walked many a mile with me without problems, spreading his friendliness wherever he goes. Brychan a terrific ambassador of the breed and everyone he meets enjoys his outgoing personality. He’s a great traveler who has accompanied me on several road trips.” 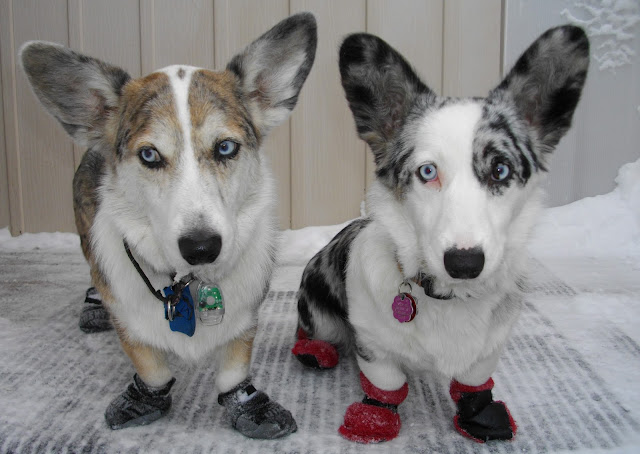 “He’s not totally thrilled to be the only boy dog in the house. The girls often gang up on him and steal his toys, but he won’t fight for his bones. He just lays in his basket and moans until Mom comes and saves the day. Those naughty girl Corgis are tough stuff and a guy doesn’t stand a chance against them!” 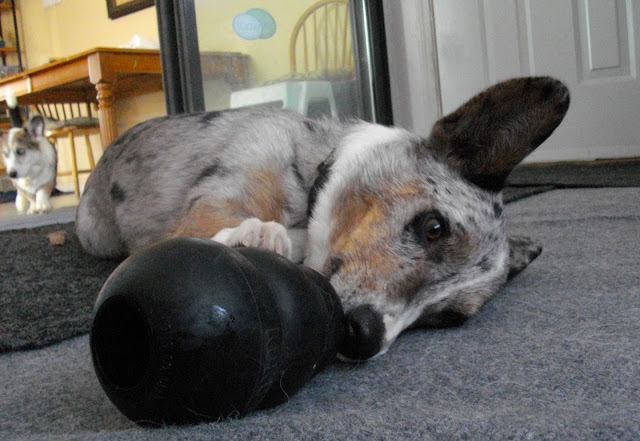 “Olwyn (Bluetrix Alwyn Willa Mint Blue) is my ambitious, nearly four year-old Cardigan Corgi. She’s from a working ranch line in Pincher Creek Alberta.  Her dad is a New Zealand import, so we were hoping for softer temperaments with his influence, but Olwyn took right after her mom, who was described as an ‘alligator’ — yikes!”

“Olwyn is the smartest dog I have ever owned, which makes her rather interesting to live with, as I’m in town and don’t own livestock!  I’ve done agility with her and she’s great at it, but I don’t trial her because she’s not crazy about being around strange dogs.  During our long, cold winters I have a devil of a time thinking up indoor games to keep her amused. She outsmarts everyone, including me, no matter what we are doing.  When Saiorse joined our home, she became Olwyn’s puppy ‘project’, which kept her busy for a while.”

“Olwyn thinks she’s a REALLY big dog and aspires to fly — off the microwave stand, the kitchen table, the bookcase and any other place that allows her to lord it over her three Cardi siblings. She also prefers extremely large dog toys. Little ones are for sissies.”

“I worry about her back, and tell her so every day. She doesn’t care. Olwyn is like one of those flying monkeys in the Wizard of Oz. Weird and scary.” 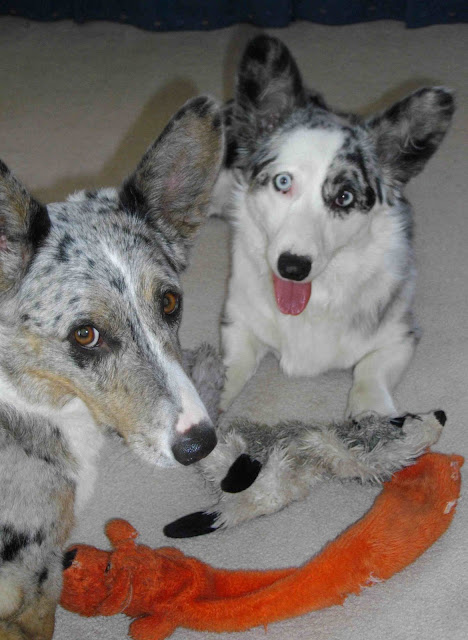 “I like to call Saiorse (Coedwig’s Seaforth Little Jackie) “Buzz Saw”, though her name is pronounced “SEER-shah”). 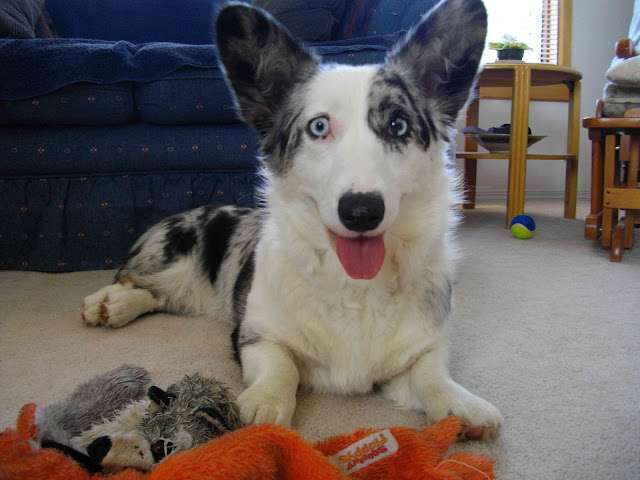 “This little beauty came to Cochrane, Alberta (near Calgary) from Portland, Oregon last Summer. I should have known by the many hours of screaming at the top of her lungs in the van — as I tried to find my way out of Portland —  that this little gal had a potent personality. My poor, long-suffering Brychan said the trip back to Canada was the longest of his life. After the second day of her hollering I had to agree, but was so glad to have her after such a long wait!”
“Saiorse is the most genuinely happy dog I have ever known. Everything is JUST GREAT ALL THE TIME!! She has a funny little turned up mouth which, giving the impression of a perpetual smile. She is totally adorable, except when she is employing her staggeringly loud, ear-splitting shriek. Then maybe not so much.” 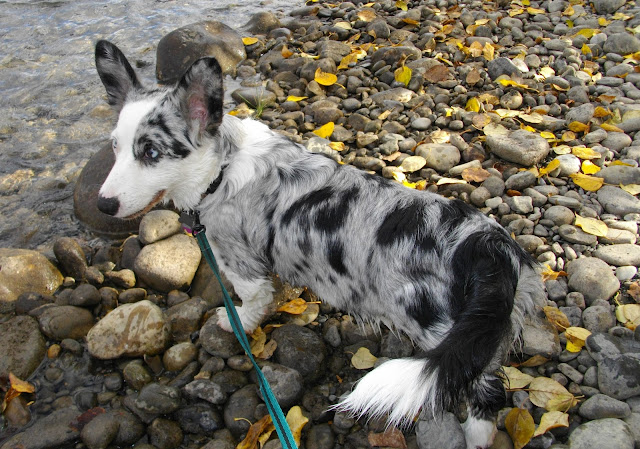 “Saiorse is just about the most amazingly destructive puppy I’ve ever raised, but gosh she’s so happy about her role as the one-pup wrecking crew that I can never get angry with her!” 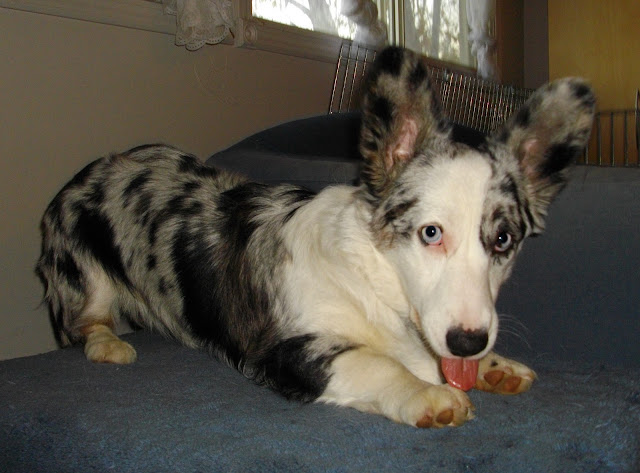 “She trains her jaws daily on Doberman-sized Kongs, Tirebiters and Nylabones. When she’s stuck in her x-pen with her sister before I get home for lunch, and when they’ve run out of cheese and peanut butter stuffed chew toys, she gets to work. She’s bored through the kitchen walls (while in the x-pen), ripped up two layers of kitchen lino (while in the x-pen), trimmed chunks of molding off the walls, and eaten a hole through an industrial carpet (yes, all while languishing in the x-pen). And pretty happy to do it, too. No separation anxiety here — she just gets these great ideas and gets straight to work. Luckily, she doesn’t ingest all this stuff, just leaves little chunks of everything laying about. I’m thinking of starting a home remodelling business with her as my star employee. She has an impressive work ethic.” “Not only can she take up a floor in record time, she’s the best snow dog ever and even enjoyed our brutal November minus 40C windchill weather.  Saiorse would run outside and belly flop in the snow, teasing “catch me if you can!” as she dolphined through the snowdrifts.”
“She has beautiful conformation, great bones and a sunny disposition. What more could anyone want (besides a new kitchen floor)? I’m so lucky!” 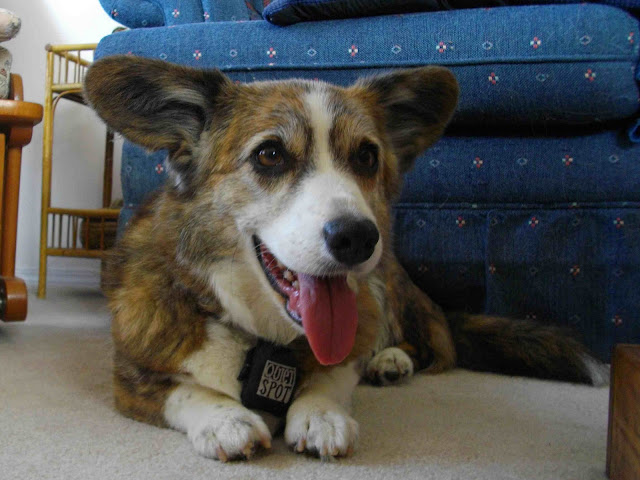 “I saw Ivy’s little face on the Shadowalk Cardigans website five years ago. I had just lost my last long-haired Dachshund (and had become an instant convert to Cardis!) I felt there was room in my heart for another little dog who really needed a home.”
“Ivy had originally come from Missouri and lived in several homes from Missouri to Oregon, landing at last in Montana. The kind folks at Shadowalk had agreed to find her a forever home, as her original breeder had passed away. Ivy (then named ‘Vi’) was a shy little thing and didn’t really seem to know how to be a dog. I contacted Shadowalk and said if they could find a way to get her from the Missoula area to Calgary AB, I would provide her with a great life.”
“I had already got my boy Brychan from them, so they knew I was a responsible home. No sooner had I sent the e-mail than the wheels were in motion, and several weeks later, Ivy got a lift almost to my door.  After her fifteen hour trip North, Ivy was a wreck, scared of everything and with the biggest, most pleading eyes I’ve ever seen. It took a lot of time and patience before her happy little personality emerged, though she can still be a spook at times.” 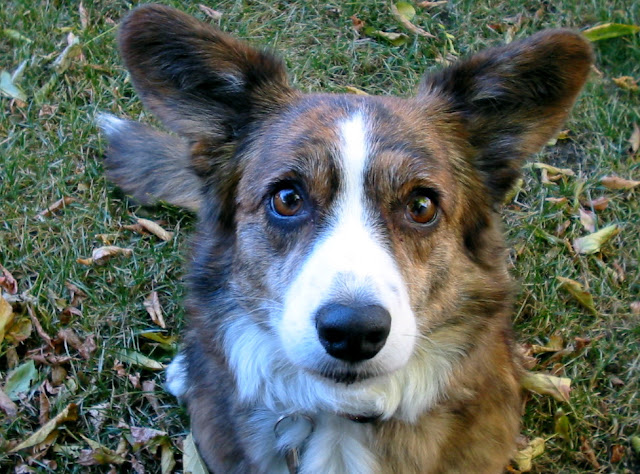 “Although she is slow to accept other dogs, Ivy turned out to be a great cuddler and has adapted well to being the senior dog in the household. She didn’t know how to play with other dogs and often accidentally cause scraps when she’d get too wound up while the others would play. Persistent Olwyn finally taught her how to be a real dog.”
“She was none too pleased when puppy Saiorse arrived, and although it took a long while, Saiorse finally wriggled her way into Ivy’s heart. She finally caved, and now they sleep nose to nose at night … too cute. Some things are just meant to be.”

A big howdy-do-barOOOOoOOoO from your neighbors to the South!

Ten year old Frankie stakes out his favorite spot on the couch. Flooftastic.   Jasper still looks a lot like a puppy, but he ... END_OF_DOCUMENT_TOKEN_TO_BE_REPLACED