In October of 2012, Corgi mix Lucky appeared on The Daily Corgi as an adoptable. Three months later, we learned his Cushings Disease had advanced so far that the staff of the Almost Home Pet Adoption Center in Lovingston, Virginia decided he would probably spend the remainder of his days in their care.
Lucky finally got adopted.
Thanks to Flower Vankam for sharing this follow-up, and to Al — the special man who bestowed the greatest gift of all on Lucky. 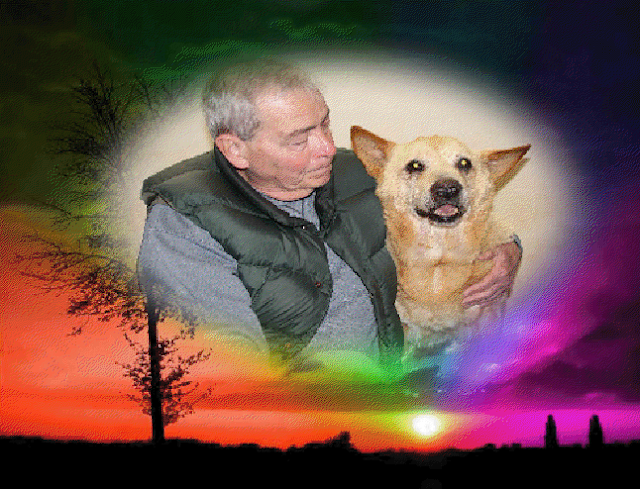 Al and Lucky
“Only Lucky knows the story of his less than perfect Earthly life, but in his later years he was fortunate enough to have been gathered up into the loving arms of the Almost Home Pet Adoption Center. Nearly deaf and blind, with other medical issues that our shelter regularly tended to, there were many things Lucky delighted in while living with us for his last three years. He enjoyed his very own room with soft floors, comfortable bedding, an abundance of toys — and he especially enjoyed his treats!
On February 22, 2013, Lucky’s body could no longer sustain him and it was time for him to leave us. Many of his friends came to say goodbye to him and brought him delicious meaty treats, so he could finally eat his fill. Lucky loved the shelter staff and thought of them as his family, but he had a best friend outside the shelter too. Al, Lucky’s favorite volunteer who always doted on him and took him on special walks and outtings, adopted Lucky that day, and then held him closely as Lucky peacefully left for the Rainbow Bridge.
We love Al for all he did for our beloved Lucky, but no one loves Al more than Lucky did. Lucky always had eyes and a tail wag for Al, and when it is time for Al to head to the Rainbow Bridge himself, we can imagine that Lucky will be there waiting for him. That is how dogs are. Loyal to those they love.

Lucky was a special dog and we are all better people for having known him and witnessed his bravery during his many struggles.”

p.s. Al tells me that an especially appropriate area has been set aside for Lucky’s final
rest, near a large shade tree, next to the garden, and right by the
picnic table.

Ten year old Frankie stakes out his favorite spot on the couch. Flooftastic.   Jasper still looks a lot like a puppy, but he ... END_OF_DOCUMENT_TOKEN_TO_BE_REPLACED